Diamela Eltit and the escaping voice in Lumpérica

With her first novel Lumpérica (1983), Diamela Eltit created an intellectual space at a time when freedom of thought and expression was not permitted in Chile. Labelled as one of the most famous Chilean writers, Eltit grew up in Santiago, where she remained for the entirety of the Pinochet dictatorship (1973-1990). Edie Essex Barrett talks us through the controversial figure who remained in “inxile” under dictatorship when most intellectuals chose instead to flee.

“Just as I feel that I could not re-write one single page of a book I have already published, I think that my writing contains questions within a space that exceeds me. And maybe that is what keeps alive my desire to write: that voice which gets away from me and which, many times, exalts or shames me.”

Before publishing Lumpérica, Eltit was a founding member of CADA – Colectivo de Acciones de Arte (Collective Art Action)-  an organisation dedicated to the production of political art against the dictatorship. This became the anchor of her narrative project against the authoritarian regime. The majority of Eltit’s work focuses on giving voice to the marginalised, such as the homeless woman at the center of Lumpérica. Although the text has no identifiable narrative, the protagonist, E. Luminata resides in a square in the centre of Santiago surrounded by the ‘lumpen’, other marginalised members of society. The square oversees various occurrences, such as both self-inflicted and external violence and performances under the light of ‘El luminoso’, an electric light that shines directly into the middle of the plaza, symbolising the omnipresence of the neoliberal dictatorship.

Lumpérica is written in an experimental neo-avant-garde style, permitting her novel (although the combination of narrative forms seem to resist the definition of ‘novel’) to be published under the strict censorship laws. It passed through the government’s censorship checks as it was frequently dismissed as ‘no se entiende’ (not understood), even by literary critics. Nevertheless, the difficulty the reader experiences in attempting to understand Lumpérica is intended to reflect the experience of life in Chilean society under Pinochet. Consequently, Eltit is celebrated for pushing the boundaries of literature. She took Lumpérica a step further, turning it into performance art in which she read out pages of the novel in a brothel in Santiago, literally taking it to a marginalised space. Even the novel’s title announces from the outset that Eltit is not going to settle for an inoffensive, light discourse as Lumpérica is a play on words: Lumpen – people of the lowest echelons of society; perica – a slang word for ‘whore’ as well as ‘América’.

Eltit means for Lumpérica to be difficult to understand — she wants the reader to open their eyes to various understandings, going against the singular ‘official’ narrative promoted by the military regime. In an interview in 2005 with Mary Green, Eltit says, “I’m interested in a process of inclusive reading, which includes the other, and in this way allows the reader to establish a dialogue with the book from his or her own fragmented position”. Lumpérica demonstrates a strong resistance to the constraints of language that become palpable under an authoritarian government in which one has to choose one’s words wisely. Eltit proves that intellectual freedom is possible under a dictatorship: you have to work to create the space for yourself.

Chile’s dictatorship had a neoliberal agenda that enforced reduced social spending and the (re)privatisation of multiple industries, such as pensions, healthcare and education. Not subscribing to this political thought, Eltit actively worked against neoliberalism in her works and in the way that they were published; to her, “the danger lies in the ‘bureaucratisation’ of writing”. Given the circumstances, it is unsurprising that Eltit experienced more fame internationally than in her own country. 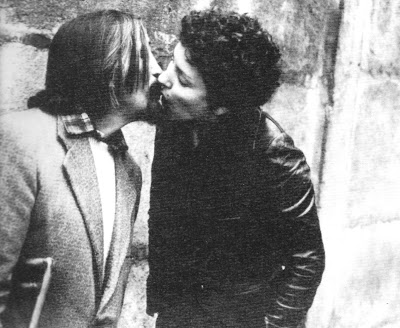 Eltit kisses a homeless man as an act of performance art

The significance of Eltit’s fame is intensified because she is a woman. Under Pinochet, patriarchy prevailed and motherhood was sanctified: women were forced to assume very traditional, normative roles. Men and women had to conform strictly to gender roles – the military would cut off women’s trousers if they were seen to be wearing them in public. Women had reduced information on, and access to, contraception and abortion clinics. Nevertheless, female resistance under Pinochet did exist, with Eltit’s Lumpérica being just one example. Women also took to the streets to protest silently in the search for their missing loved ones, who’d likely been taken as part of the military’s terror campaign designed to repress dissent. These are the women that subsequently had to act as the ‘man’ of the household. Only recently did Chile relax its abortion laws that still existed following the Pinochet regime. Today, women have significantly more freedom than under the dictatorship, but there is still more that could be done. In this sense, reading Lumpérica today is a reminder of the struggles that everyday people endured under an oppressive government.

Although criticised as elitist (eltit-ist?) Lumpérica provides an important insight from a victim of Pinochet’s regime into what life under his rule was like. Disorientating, panic-inducing, isolating and painful, Lumpérica is both intellectually stimulating and thought-provoking. The modern-day reader becomes involved in a constant chase for the voice for that continually escaped Eltit, and in doing so is led into in a startling space, mirroring the repressive conditions that formed such a work.