17 May 1980 marked the start of the bloodiest war in Peruvian history. It was an internal conflict in which 69,280 Peruvians lost their lives as victims of extrajudicial killings, disappearances, torture, massacres, and sexual violence. A testament to the barbarity of this war resides in the fact that of every four victims, three were Quechuan-speaking indigenous peasants.

After Peru’s military government allowed elections for the first time in 1980, the Sendero Luminoso (Shining Path) were the only political party to not take part, opting instead to launch guerrilla warfare against the State in the Ayacucho region of the country. Shining Path adopted Maoist guerrilla tactics, whereby they would open up ‘guerrilla zones’ or, in other words, areas where they had driven out government forces, and proclaim them ‘liberated zones’.

The internecine fighting that would come to define the following twenty years of Peruvian history has been subject to a great deal of historical discord. The truth of these events has been shrouded in a nebulous haze of falsely asserted truths and warped by the Peruvian state’s attempts to condemn this shameful part of history to the recesses of collective memory.

In July 2001, the Comisión de la Verdad y Reconciliación (CVR) was established in response to these attempts. The CVR was tasked with investigating the human rights abuses committed throughout the Peruvian Internal Conflict, as well as recommending measures to promote and strengthen human rights. However, the report was met with a remarkable degree of hostility from certain conservative forces in Peru, including right-wing press and reactionary political parties.

It was for this reason that Peruvian comic book artist Jesús Cossio, along with Luis Rossell and Alfredo Villar, decided that it was necessary to write Rupay, a comic book which documents specific incidents of political violence that occurred in Peru between 1980-1984.

“[We] decided it was imperative to encourage the reconstruction of a collective memory around human rights in alternative ways, specifically with regard to what could be done with the comic-book form.” 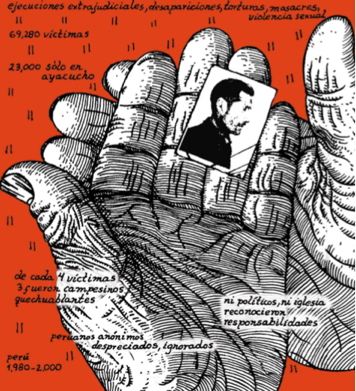 Rupay was published for the first time in 2008. Its title borrows from Quechua, Peru’s most widely spoken indigenous language, and translates into English as ‘ardour’, ‘fire’ or ‘heat’. The cover art loyally mimics the official CVR report’s front page, which portrays a harrowing image of cupped hands solemnly cradling the photograph of a victim in the style of a comic book illustration. Various startling facts and statistics are constellated around the image, denoting the grave nature of the violence. On turning the page, the reader is introduced to these chronicles of political violence with a quote from philosopher Walter Benjamin that reads: “There is no document of civilisation that is not, at the same time, a document of barbarism.” 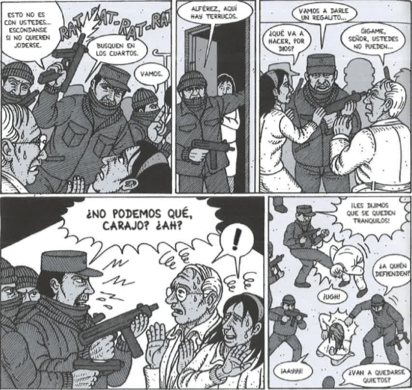 Whilst some would criticise the use of the comic book in this context, arguing that it undermines the seriousness of its subject matter, Rupay’s form is perhaps its greatest asset. The use of this relatively marginalised cultural medium allows the authors to present alternative versions of events to the reader. Cossio told BristoLatino that “what is most important is to show to the readers, especially young people, the kaleidoscope of experiences during and the after this conflict”. It is able to do this through the blurring of the boundary between fact and fiction. The author added: “Comics allow you to recreate moments and settings with pen and paper”. Rupay’s use of photography, drawn images and fictionalised dialogue establishes a Brechtian distance between the text and the reader, allowing them to take an active role in objectively interpreting the events in different ways.

In this way, Rupay captures the fluidity of memory, posing questions to the reader about what may have happened and what could have been said. It doesn’t seek to establish another ‘truthful’ version of events, but instead tries to encourage the reader to engage in the formation of a collective national memory. In the discussion of its own past, Rupay repositions the Peruvian people from the role of passive spectator to active participant. 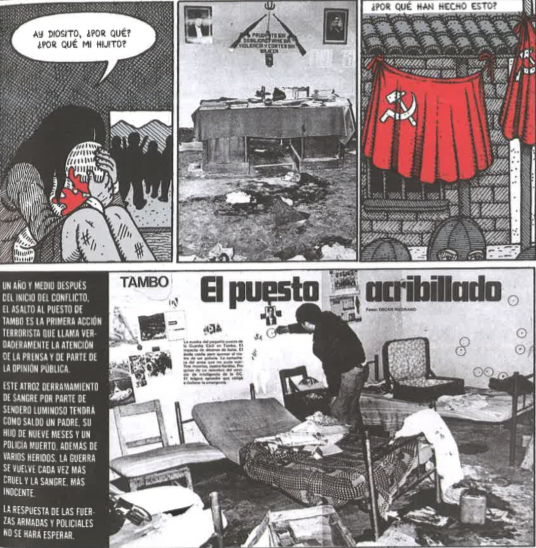 The comic aims to redress what Cossio calls some “common yet false denialist attitudes” that have been circulating in Peru. Take the idea that, for example, the crimes committed during the internal conflict were a result of “excesos emocionales”, owing to the wartime context. In other words, the notion that these acts of violence occurred when either soldiers were put in a life-or-death situation or, in the case of the Shining Path, that their killings were a necessary part of the so-called “quota de sangre” (‘blood quota’) in the “people’s war”.

Cossio believes that, in the search for the truth in these events, we must incorporate multiple perspectives and interpretations in order to construct a version of history from our collective memory that is plural, critical and loyal to real facts.

“Lately, human rights circles have been discussing the idea that there no such thing as memory, but rather memories in plural, which are simultaneously conflicting and interlinked. As for sharing the truth, I think Rupay is a grain of sand in a series of written, audiovisual and face-to-face initiatives that have been carried out by people in recent years”

Recently, Cossio, Rossell and Villar have taken up an opportunity from their Brazilian publisher, Editora Veneta, to release an English translation of Rupay. With versions already planned to be released in France and Brazil, the authors are delighted at the prospect of shedding even more light on one of the darkest periods in Peru’s vast history.

Besides his work on Peru’s internal conflict, which also includes another visual account of events called Barbarie, Cossio recently worked on a web-comic in collaboration with a number of journalists at a digital publication, Ojo Público. The project, La Guerra por el Agua (The War for Water), centres its narrative on the mining conflict between farmers and a mining project called ‘Tia Maria’ in Cocachacra, southern Peru.

In assessing the validity of purportedly ‘truthful’ discourses, we also give rise to questioning the usefulness of memory itself. Given the inherently subjective nature of memory, we can say that it harbours certain elements of fiction and, in doing so, contributes to its invalidity as an historical reality. Rupay’s discussion of truth and memory undeniably makes it a poignant narrative in the context of Peru’s recent history and, crucially, paves the way for the Peruvian people to actively participate in their past, present and future.