How did the Centro Financiero Confinanzas skyscraper in downtown Caracas become “the Tower of David”, the world’s tallest squat? Isaac Norris explores the human significance of the building.

Ranked the least safe country in the world, where just 12% of citizens feel secure enough to walk alone at night and a lowly 14% have confidence in their police force, Venezuela is in an undeniable state of chronic crisis. News stories about Venezuela cause crippling shock, telling harrowing reports of food shortages, soaring crime rates, housing deficits and political corruption. Yet rarely are we in the Western world exposed to uplifting and hopeful stories. Disseminating news stories of endless crime and violence only function to perpetuate this vicious cycle. Mass media largely portrays the settlement Tower of David, located in the heart of downtown Caracas, with negative connotations such as ‘vertical slum’, ‘world’s tallest squat’, ‘illegal ghetto’. I do not intend to mirror these epithets, but rather, to paint a portrait of the shared sense of communion. The Tower of David, albeit vacant now, serves as a testimony to the power and solidarity of the Venezuelan people in the absence of the state; a microcosm of Caracas.

‘The community was neither a den of criminality, nor a romantic utopia. Rather, Torre David was a building that possessed the complexity of a city.’
(Urban-Think Tank) 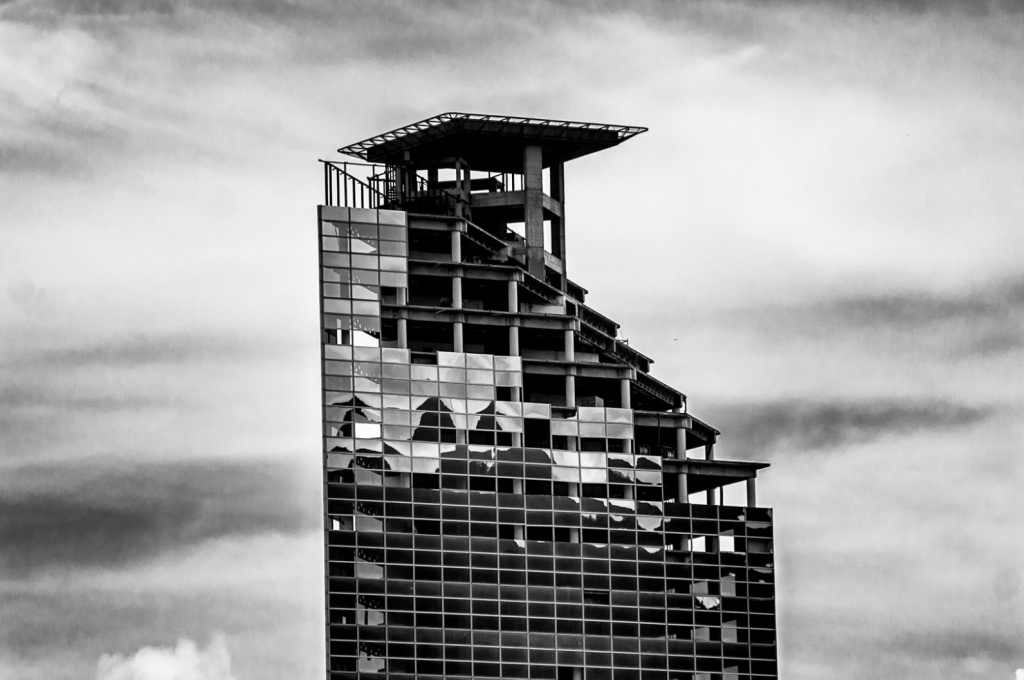 With 46 floors and 196m in height, The Cofinanzas Tower, better know as the “Tower of David” can be seen from almost anywhere in Caracas.

Construction began on the tower, formerly planned as the Centro Financiero Confinanzas, in 1990 by the architect David Brillembourg. However, the project came to a complete standstill in 1994 following the premature death of the planner, hence the more illustrious name ‘Tower of David’. Delays were further aggravated by the Venezuelan banking crisis plunging the country’s economy into a state of turmoil. As a result, the tower remained desolate and unoccupied for 13 years, until a multitude of displaced citizens congregated at the base of the site.

On a rainy night in September 2007 the revolution commenced. Hundreds of citizens, fleeing their precarious living arrangements due to heavy rainfall and a lack of basic infrastructure, gathered at the base of the derelict skyscraper to take it over. Historically, throughout Latin America urban planning has typically consisted of imposing master plans to essentially push the poorer classes to the periphery, yet, nearly always, they return to the civic centre to reclaim their space as citizens. This is exactly what happened in the Tower of David. Over 3,000 people ended up living there, until in 2015 the government evicted all the tenants. It now stands disused, echoing its former state. Ultimately, it has evolved into an emblem of the failure of the socialist Bolivarian Revolution, led by the former president Hugo Chávez.

‘The squatters’ direct action has subverted the skyscraper, transforming a beacon of finance capital into one of social capital. Vertical exclusivity becomes horizontal redistribution’
(Justin McGuirk)

One of the most striking aspects of the inhabitants’ achievements was their ingenuity and self-sufficiency, existing individually from the state. The tower essentially mirrored street life, evidenced by the array of facilities; bodegas (convenience stores), hairdressers, libraries, gyms, satellite dishes. The payment system was fairly remarkable. Residents did not have to pay rent per se, but rather, a small monthly expense of 150 bolívares to cover the general upkeep. The makeshift apartments had no market value given their purpose of housing the more underprivileged section of society, however, labour and development was refundable. This policy inspired many people to view their property as an investment, creating a sense of belonging, rather than the more prevalent transience of temporary accommodation. With 45 storeys and a half-completed elevator, residents had to adapt to walking up interminable stairs, just one testament to their diligence and perseverance. 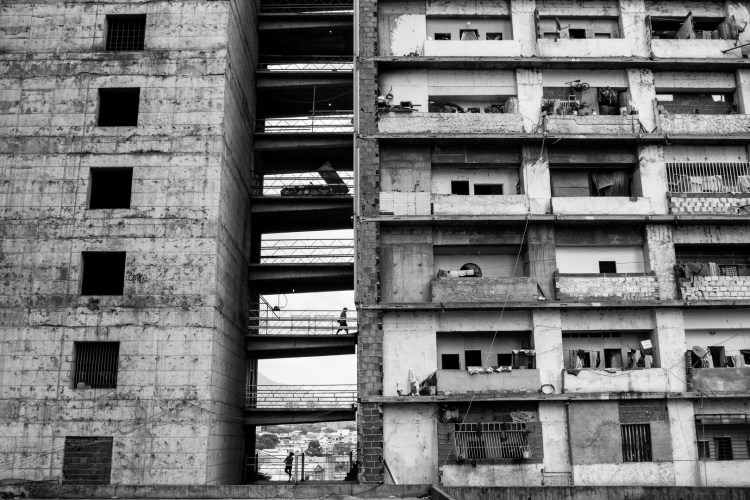 Urban-Think Tank (UTT) are an interdisciplinary design collective who focus on social architecture and informal development. Working within the tower, they implemented a bottom-up approach in order to effectively work with the residents and learn from their experiences. UTT believe that Latin American cities are already extensively built up, in turn, leaving little urban space for new buildings. Consequently, the solution involves utilising what already exists in a more efficient way. Engrossed by the unconventionality of a formal structure containing informal settlements, they began to conduct interviews with the locals and create designs for water and electrical facilities in order to enhance the lives of the people. UTT remain a truly inspiring example of how informal settlements should be viewed as the solution to urban life, rather than the problem, especially in a country such as Venezuela in which the housing deficit surpasses 2 million.

Alejandro Cegarra, a native of Caracas, photographs the space in his series ‘The Other Side of the Tower’. As a means of counteracting the media and its negative portrayal of the edifice, Cegarra seeks to capture the sheer beauty of life within the tower, ‘The reality is that the inhabitants are simply people who are searching for a sense of belonging, and a place to call home’ he states on his website.

The uncertain future of the tower will not obliterate the memory of the inspiring community who inhabited it for 8 years, transforming a disused structure designed for the wealthy into a functional haven for the poor. Is it fair to have secure empty high-rise buildings in the centre of a city whilst many struggle for survival on the outskirts?

Watch the Urban-Think Tank film about Torre David on Vimeo 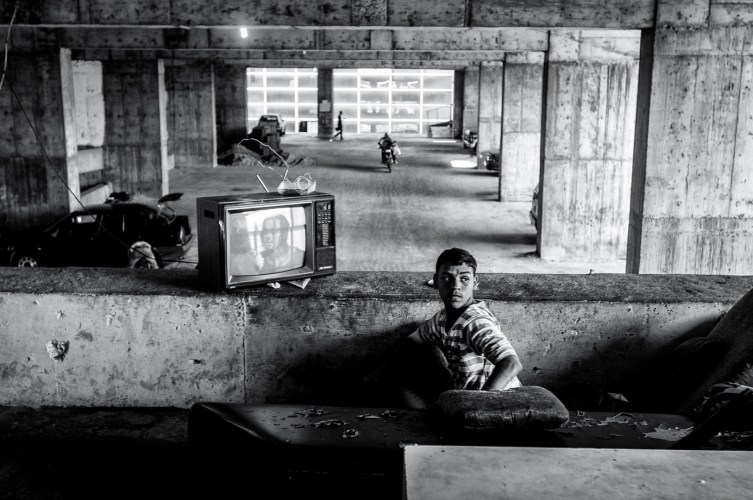 A man watches TV on the 10th floor of the parking lot. He doesn’t yet have a house. Alejandro Cegarra 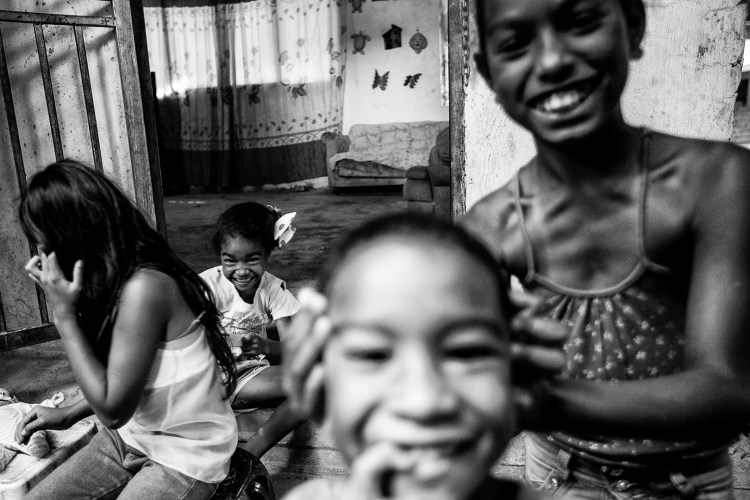 Children play on the 6th floor of the tower. Photo: Alejandro Cegarra 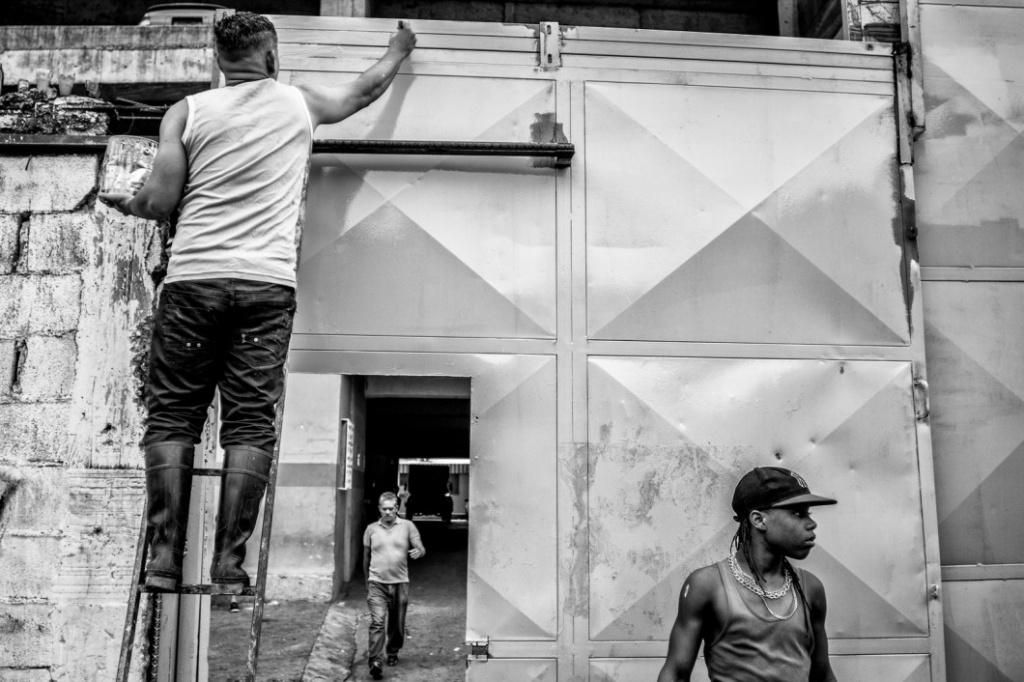 Two young men paint the garage entrance as part of their collaboration for the tower maintenance. Photo: Alejandro Cegarra