As Venezuela plunges deeper into socio-economic turmoil, young people have turned to RuneScape as a lifeline. In this story, Louis Sanger delves deep into the world of RuneScape and Venezuela’s new trend of digital gold mining for cash.

The icon is an ‘R’ and an ‘S’ stylised to look as if they’ve been carved into two stones. When I click on it the game opens and the stone-age theme continues. I select “NEW USER” and soon find myself (my avatar) on a stone-age island. There are other players: some in the same green and brown outfit as me, others in more elaborate costumes. Everything is rendered in the choppy gradients of early 2000s video game graphics.

It’s my first time in RuneScape. Somewhere here, I have heard, there are Venezuelans earning a living by a technique called gold farming. They spend hours labouring in-game to earn virtual money, which they can later sell for real money. They are the reason I’m here, but I don’t know yet how I’ll find them.

RuneScape is a Massively Multiplayer Online Role Playing Game (MMORPG) first created in the late 1990s in Nottingham. It is one of the most popular MMORPGs worldwide, as it can be downloaded and played for free on just about any computer. As a player, you get to explore a world —Gielinor — populated by gamers and mythical creatures while hunting, gathering, completing quests, and searching for items. At the heart of it all are the valuable golden ‘runes.’ Players extract these by performing a variety of tasks—killing dragons, fishing, and trading. Runes can be used to buy armour, weapons, and new outfits. They are, now, highly coveted. 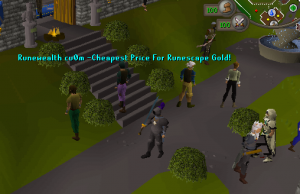 A few weeks after I begin this project, I come across a video that Juan Guaidó posted to Twitter. It’s dawn and there are lines of armed soldiers behind him. The Venezuelan politician speaks about the people, the constitution, sacrifice, persecution, and fear. It’s filmed on a grainy cell-phone camera in portrait mode. The soldiers behind Guaidó shift their weight from one leg to another. They are wearing mismatched uniforms. The coup is backed by the government of the United States. The coup fails.

Due to inflation, most Venezuelans now earn less than $5 USD a month. US sanctions and economic decline mean that around 90% of the country’s population lives in poverty. Mass migration is draining the population. One of the country’s only surviving industries is in the east of the country, where 20th-century gold mines have been re-opened by criminal gangs. In Bolívar State most exchanges are made using gold, including paying for university tuition: “A degree is not expensive, because it’s only 2.5g of gold [for a semester],’ Arturo Peraza, rector of the Universidad Católica Andrés Bello, told the Guardian in 2019.

I begin to discover that profitable gold mines also exist within digital worlds. My Reddit research tells me that RuneScape gold farming often entails killing dragons in the wilderness – within a player vs player (PvP) zone. That’s where one avatar can kill another avatar, stealing the items that the other had on them. Morality in RuneScape mining reflects that of the ‘real world’. While gold farmers face virtual dangers, the work can be fruitful: experienced gold farmers earn about 500,000 golden runes an hour. On third-party websites, gold farmers can sell 1,000,000 golden runes for about $1 USD.

I try to make it to the Graveyard of Shadows, an area where gold farmers are known to work. On the border, a warning pops up informing me that I am entering a PvP zone, and I may be killed by another player. I pass something that looks like a swamp and soon, another player dressed as a wizard quickly kills me. I think the wizard must be disappointed to find that I have nothing on me. 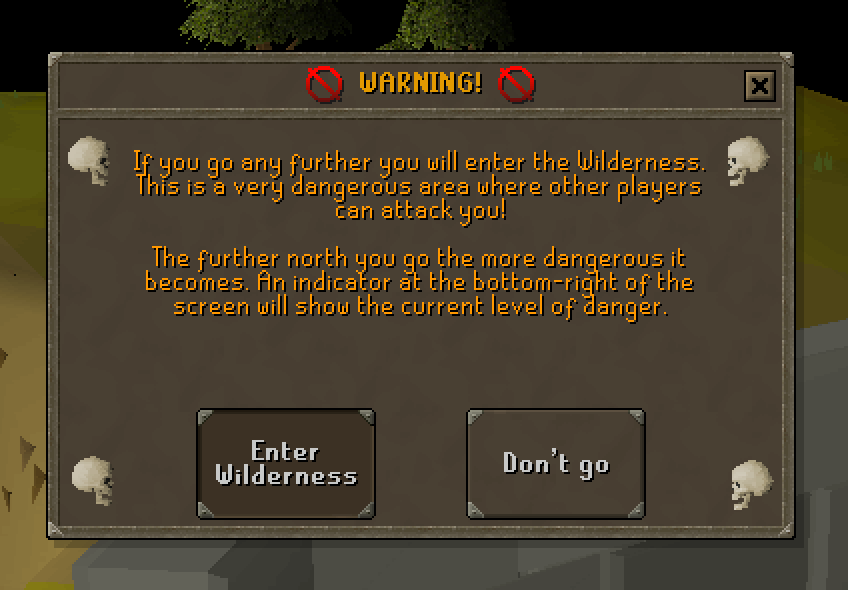 In Bolívar State, “in swampy, malaria-ridden pits controlled by criminal gangs, men labour away much as they would have done centuries ago” (Gold Fever, Guardian). Nicolás Maduro’s government turns a blind eye to the illegal mines; it is one of the only functioning industries in the country and the gold from the edges of the Amazon Rainforest helps the government pay its bills. The groups that run these mines are armed groups called sindicatos. “Four residents said that they witnessed members of syndicates amputating or shooting the hands of people accused of stealing. Several other residents said they knew of cases in which syndicate members had cut offenders into pieces with a chainsaw, ax, or machete” (Violent Abuses, HRW).

Gold farming is, likewise, against the rules of RuneScape. It’s technically illegal to sell your runes on third-party websites, as Jagex tries to maintain the ‘integrity’ of the game’s hunting-gathering ethos. Of course, third-party selling of runes is only possible because wealthy RuneScape players are willing to buy runes instead of extracting them themselves.

In an attempt to learn more, I search “Venezuela” within the Reddit thread /r/2007scape. There are hundreds of results. Most of them are poorly constructed memes. One post is titled: “Civil War erupts in Venezuela after jagex bans all their gold farming accounts!” Jagex is the company which owns RuneScape. The post’s content is a fourteen-second video of what looks like a large family fight. Men and women punch each other. Dogs run past. The blue-and-red lights of a police car light the scene.

Another result is a post titled “Bit of perspective on why gold farmers exist.”  In this vlog, a man walks around Caracas, explaining the price of food in Venezuela and how inflation has affected people. There are sympathetic comments: one user recounts how they befriended a Venezuelan gold farmer and ended up sending them $200 USD, which is more than the gold farmer would have made in a year; another user asks if there’s a way they can find someone in a similar position to do the same.

The next result is titled “Situation in Venezuela.” The author writes that they used to be annoyed by the gold farmers’ presence, but since reading about the realities of life in Venezuela they are now sympathetic. They ask the community if there’s anything they can do to help people in Venezuela. In the comments many discussions take place about socialism, economics, politics, and the value of charity. I send the original author a private message, telling him about my project and asking him to tell me more about the gold farmers. 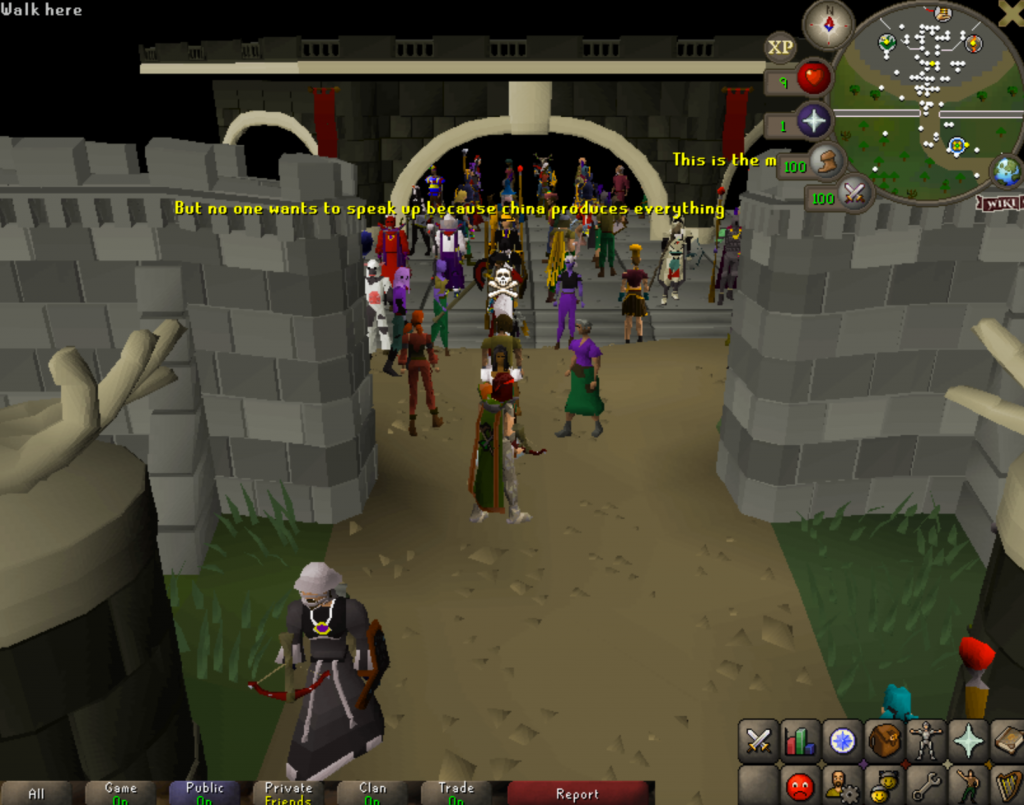 A few days later, the author responds to my message. He says he’s heard that a gold farmer makes more than a doctor in Venezuela. “I don’t think the community has a big problem with gold farmers, as long as they don’t ruin the experience for normal players,” he tells me.

I think about the division between reality and fantasy: in Venezuela, a history of economic collapse has led to violence, exploitation, and turmoil all over the country, especially in the state of Bolívar. But it has also created waves in Gielinor, a fantasy world in which Venezuelans have learnt how to earn real money. During a nation-wide power outage in the Spring of 2019, those who farm gold in RuneScape could not play. The internal economy of RuneScape collapsed, as gold was not being extracted at its usual pace.

One result to my “Venezuela” search on /r/2007scape won’t appear because it’s been deleted. I use a tool that allows you to see archived versions of internet pages and click the title “Killing Venezuelans at East Drags Guide.” The guide is written in a matter-of fact tone: “You essentially have to pick off the weakest ones first,” the writer says (Killing Guide, Reddit).

“The Venezuelans at green dragons are not bots. They genuinely do it because they have no other option. The exchange rate of USD to their currency is so high that they make more $ per hour than a regular job in their country. That being said, I have noticed a few techniques that can maximize the damage done” (Killing Guide, Reddit). The author emphasises the importance of communication: “always make sure to speak Spanish when possible. It doesn’t matter what they say to you, but through out [sic] stuff like ‘perro’ ‘puta’ and talk shit about their family, they hate that. google translate is acceptable” (Killing Guide, Reddit). I search for the user who wrote the killing guide, but the account no longer exists. 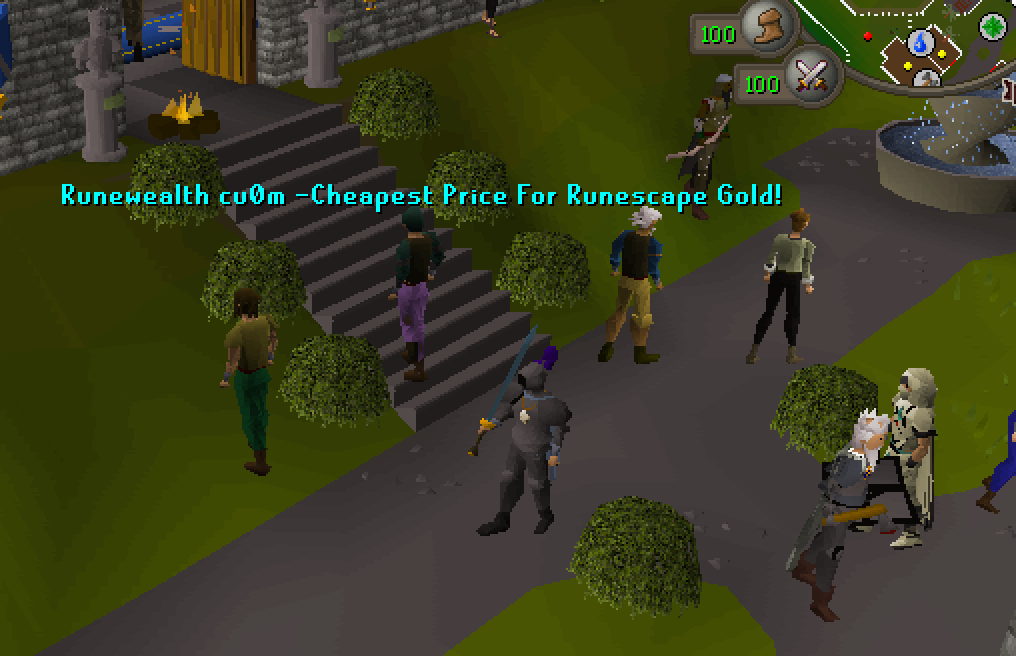 Maduro – who still wields power in Venezuela, as Juan Guaidó is no longer recognised as the country’s president by most EU countries  – is reportedly considering converting the Venezuelan Bolívar to an exclusively digital currency. The gold mines in Bolívar state continue to operate, and Maduro is now permitting river basin mining, a dangerous and damaging practice that negatively affects many of the Indigenous people living in the region. What was once the wealthiest country in Latin America is now the poorest.

Months later, I log on to RuneScape. I walk around Misthalin for a while. I can’t find the way out. Some avatars walk past me, advertising golden runes for sale. I find the river which flows toward the Graveyard of Shadows. I follow it and eventually end up near the graveyard. I don’t see any dragons this time, just giant rats. I wonder if perhaps the gold farmers have moved on.

On  Reddit, I’m somewhat heartened by a shift in opinion. It seems like players are no longer actively attacking Venezuelan gold farmers: they now seem mostly concerned. I also discover that gold farmers are now working in an area I have never heard of, called the Revenant Caves. I re-read my conversation with the Reddit poster who wanted to help the Venezuelan gold farmers. I check to see if there are any new comments on his post. As I scroll down, one short comment from a long time ago catches my eye: “In my opinion, it sucks to suck.”

The two sides of this conflict seem iredeemably disconnected: one is virtual and one is violently real. The virtual community of RuneScape players meets in forums like Reddit and in the imagined realm of Gielinor. There, they meet the real community of Venezuelans who are busily harvesting dragon bones and hides in exchange for runes.

As the crisis has largely disappeared from news channels in the global north, it is still hotly debated on /r/2007scape. Amidst the racist memes and xenophobic comments, I found small glimmers of understanding and sympathy. Perhaps the disconnect is shrinking, or at least being recognized—what is only play for some is life-saving work for others.