Crude Words is a collection of contemporary writing from Venezuela, broadcasting the fruits of Venezuela’s literary boom to an international audience as the country struggles through social and economic trauma. The five different sections: The Art of Love: Sex, Porn & Conflict; Death & Transfiguration; Travels & Exile; Caracas: City of Fraud & Fear; The State of the Nation (And How It Got to This) offer a comprehensive picture of Venezuelan life. The range of stories was refreshing: under the guise of reading an intellectual anthology of Venezuelan literature, I thumbed through steamy lesbian pornography on the tube. The book transported me to other intensely personal stories such as ‘Cristina Cries at Three,’ Miguel Gomes’s story relating the distress of his wife’s menopause. National hardships are the backdrop of these quotidian experiences: unemployment, poverty and corruption lurk behind tales of love, sex, marriage and family. Fear and sadness display themselves more overtly in stories such as Leonardo Padrón’s ‘Variations on Goodbye,’ which presents the agonies of leaving a nation that has already orphaned its citizens by inspiring so much anguish that it no longer resembles a home. This story is artfully contrasted against Freddy Gonçalvez Da Silva’s ‘Chasing Rabbits’ which describes Venezuela as a place of immigration and refuge for the author’s Portuguese grandfather in the sixties. The collection delicately avoids taking a political stance for or against the divisive Hugo Chávez, instead contextualising his popularity by depicting the problems in Venezuela that predated his reign. The Three Percent’s records (a resource for international literature at the University of Rochester) show that in the past eight years, only five Venezuelan books have been published in English translation; this vibrant and intriguing collection counteracts this oversight.

H: What drew you to be so interested in Venezuela?

K: Honestly, I had never even been to Venezuela until after years of studying the country. I did a degree in Spanish and French, which involved studying a lot of Latin American literature, and it struck me that we didn’t learn anything about Venezuela, despite it being such a big country and so often talked about in terms of its politics. I started to read, although it is very hard to get hold of books at first – much harder than it is now – and I fell in love.

H: Were you conscious of avoiding certain representations of Venezuela when picking which stories to include in Crude Words?

K: What we really didn’t want was to be labelled just an opposition book or an anti-Chávez book, or even a political book. We tried to get the widest range possible of stories, so readers would not just be left with idea of Venezuela as suffering corruption and violence, but as a rounded, complex society like any other. Yes, we have stories about food shortages or going to collect a body from the morgue, but we also have stories about first loves and failed marriages, childhood memories and that guy down the pub who always has a new get-rich-quick scheme.

H: Through forming this collection, did you gain an understanding of what authors see as a Venezuelan national identity today, and what aspects of that identity they question?

K: Some of the stories did specifically address what it means to be Venezuelan today, particularly some from the Travel and Exile section, where characters considered what keeps them in Venezuela and also what it means to be an “other” abroad. However, despite the government being very nationalistic, this wasn’t a particularly big theme in the stories we received. The stories tended to be much more personal, rather than considering a national community.

H: Were there any aspects of Venezuelan life you were keen to include in order to represent Venezuela in a socially conscious way?

K: When Tim [Girven, co-founder of Ragpicker Press] first had the idea to make an anthology of Venezuelan writing, he was very keen to use this opportunity to inform English readers about what’s happening Venezuela, but at the same time, we also wanted people to read and enjoy the book. To a certain extent, we let the authors choose for themselves, by asking them to send us whatever they wanted to see published in English. We received many stories about the socio-economic and political situation, and included a range of these, but we also didn’t want too many stories the same subject. We had quite an absurd moment when we realised we had four stories about going to the morgue, which shows you just how bad things are in Venezuela, but we also knew that one story on this topic would get the message across. If you read the whole collection though, you realise that politics and violence are behind so many of the stories, even the funny ones or the romantic ones. 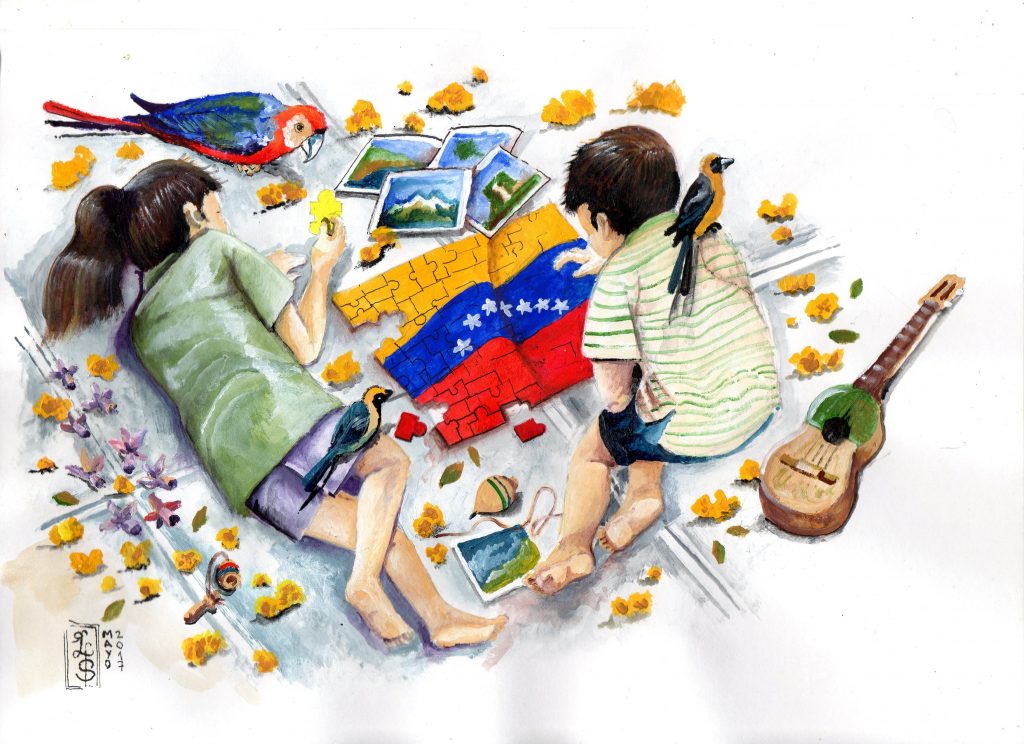 H: In your website, venezuelanliterature.co.uk, you mention how one of the reasons Venezuelan literature is under-appreciated is because British academia tends to focus on works from Argentina, Brazil, Chile, Mexico, Colombia and Peru instead – do you think there is a reason behind the focus on a handful of these South American countries in particular?

K: I think it has a lot to do with the strength of the publishing market in certain countries (i.e. Argentina, Brazil and Mexico are producing far more literature than other countries and have the resources to publicise it). But I do also think that literary tradition has something to do with it, as in people start by reading the most famous authors in Latin America like Gabriel García Márquez and then wonder what else has been written by people in the same circles, or from the same places, or inspired by them.

However, it isn’t academia alone. Mainly, I think it’s a vicious cycle: because Venezuelan books have never really been published in translation, there’s no proof that people would buy them, so publishers are less willing to take a risk on them.

H: Why do you think Venezuelan literature wasn’t recognised internationally during the Latin American literary boom of the 60s and 70s?

K: Although you find people can sometimes be quite angry about the fact that Venezuelan writers were not recognised during the boom, and a tendency to blame this on international demands for exoticised writing at a time when Venezuelans were generally writing more urban, countercultural books, I think you can’t deny the importance of political differences between Venezuela and the rest of Latin America at the time. During the 60s and 70s Venezuela was more democratic and prosperous than the rest of the region. This meant that very few Venezuelans emigrated, which in turn meant there were fewer expats promoting Venezuelan literature abroad than there were from, say, Argentina.

H: Do you think that Venezuela’s lack of participation in Latin America’s literary boom reveals how times of stability for a Latin American nation lessen international interest?

K: I don’t think stability necessarily lessens international interest, but perhaps we could say that instability (whether in terms of crime or political turmoil) can capture audiences’ interest. Look at the rise of narcoliterature, for example. Similarly, Venezuelans seem to be writing a lot more in recent years in an attempt to understand what is going on in their country, and we can presume that with more books, there is a higher chance of at least some of them capturing wider interest.

H: Why do you think Venezuela is experiencing a literary boom?

K: The main factor seems to be a desire to make sense of the current situation in the country. That’s why we’re seeing so much historical fiction in particular, as people look to the past to make sense of the present. At the same time, I think some people see writing as a form of resistance, a way of making a statement against the government or the high levels of crime or the shortages plaguing the country.

H: What is your personal favourite story?

K: I love so many of the stories, but I would have to say Liliana Lara’s The Body. The body is about how we deal with loss, but also about making the most of a bad situation, which seems appropriate given the indefatigable resilience of so many people in Venezuela right now.