Written by BristoLatino
Posted on April 5, 2018

Callum Smith talks us through the Anyone’s Child event this Wednesday 11th April at The Arts House on Stokes Croft: ‘How to End Mexico’s Drug War’.

‘The conflict for control of the drugs trade in Mexico has become increasingly violent in recent years. Anyone’s Child Mexico provides the opportunity to listen to the stories from the front-line, translated into English and placed in their historical and political context. These are emotive stories. If we don’t listen, then we can’t hope to understand what is going on’, University of Bristol Professor of Latin American History, Matthew Brown, explains.

What is going on?

Since the Mexican government increasingly militarised its drug war, over 28,000 people have disappeared and over 150,000 have been murdered. Under drug prohibition, the illegal drug trade is controlled by violent criminal gangs rather than the government. Disputes are resolved with force and ordinary families are caught in the crossfire.

Disappearances, kidnappings, and murders are carried out indiscriminately. Juan Carlos, who lost 4 brothers between 2008 and 2010, was told by the authorities simply “They were in the wrong place at the wrong time.” For the 178,000 murders and disappearances across Mexico since 2006, often no-one knows where they are, or whether they are dead or alive. And for each person, someone is still searching.

“This is a false war against drugs. We are made to believe that this war is against organised criminal groups. This is a false war. Plants have always been at our reach, but they have never taken our children away”

Drug prohibition is a global policy which is supposed to protect us. But as the stories from Mexico underline, fighting the drug war does not keep children and families safe. Drug-related violence affects thousands of families across Mexico, and until the law changes the next casualty of the drug war really could be anyone’s child.

What can I do?
Join us on the 11th April to learn how an unregulated illegal drug market has affected Mexico, and hear how families that have been torn apart by the disastrous drug war are campaigning for a new approach to drugs based on legal control and regulation.

Anyone’s Child: Families for Safer Drug Control and technologists from the Brigstow Institute have created an i-documentary containing previously unheard stories from the front line of the Mexican drugs war. Using a free phoneline set up in Mexico and connected to the site, people affected by the drug war are able to share their testimonies in this continuously expanding documentary project.

“What these stories demonstrate is that there is no ‘war on drugs’. It’s ordinary people whose lives are being destroyed by our global drug war. The voices of the impacted families have spoken and our politicians must listen. We need a global approach to challenge the status quo. We must protect families. This project will hasten the end of the drug war and demonstrate why governments, not gangsters should control the drugs market.”

“This platform acts as a digital megaphone for the families to share their stories as far and wide as possible, to create empathy and understanding of the horrors of the drug war. We now need policymakers, both in the UK and Mexico to listen and make change a reality, in the hope that some good can come out of these heart wrenching stories.” 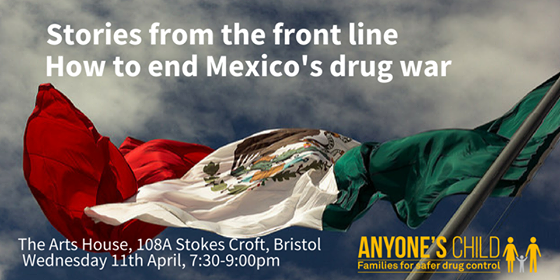