The team behind the Anyone’s Child i-documentary invited the public to learn about their campaign at its Bristol launch last Wednesday 11th April at the Art’s House, Stokes Croft.

Anyone’s Child campaign for policy reform around the regulation of drugs. They strongly believe that the more we fight against the creation, traffic and distribution of drugs, the more criminals will resist, finding new and violent ways to carry out business.

The project has been put together by a team of historians, campaigners and coders, including University of Bristol Latin American History Professor, Matthew Brown; tech expert and creator of the Anyone’s Child interactive documentary, Ewan Cass-Kavanagh. Tanía Ramírez, Drug Policy expert from México Unido Contra la Delincuencia, joined them on the panel at the Art’s House Cafe alongside Campaign manager Jane Slater, who chaired the event.

The panel explained how the interactive documentary compiles testimonies from those who have lost loved ones to the so-called War on Drugs. Following on from the Quipu Project, which set up a free phone line for victims of sterilisation during Fujimori’s presidency in Peru, enabling them to listen to and give their own testimonies, which were then archived into a digital quipu; Anyone’s Child set up a similar free telephone line for families and victims of the drugs trade in Mexico. They can give their testimony and equally listen to others, offering solidarity and decreasing feelings of loneliness and anger.

Testimonies are moderated for security reasons before being transcribed, translated and then archived in the online platform in 4 different chapters: Waiting With Love; Bloodshed and Lies; Nowhere to Turn; A Peaceful Solution. Alongside the audio testimonies, each chapter gives contextual information to the online reader/listener. This includes historical background information and images -of the speakers, campaigners at protests, Mexican neighbourhoods, and graves. 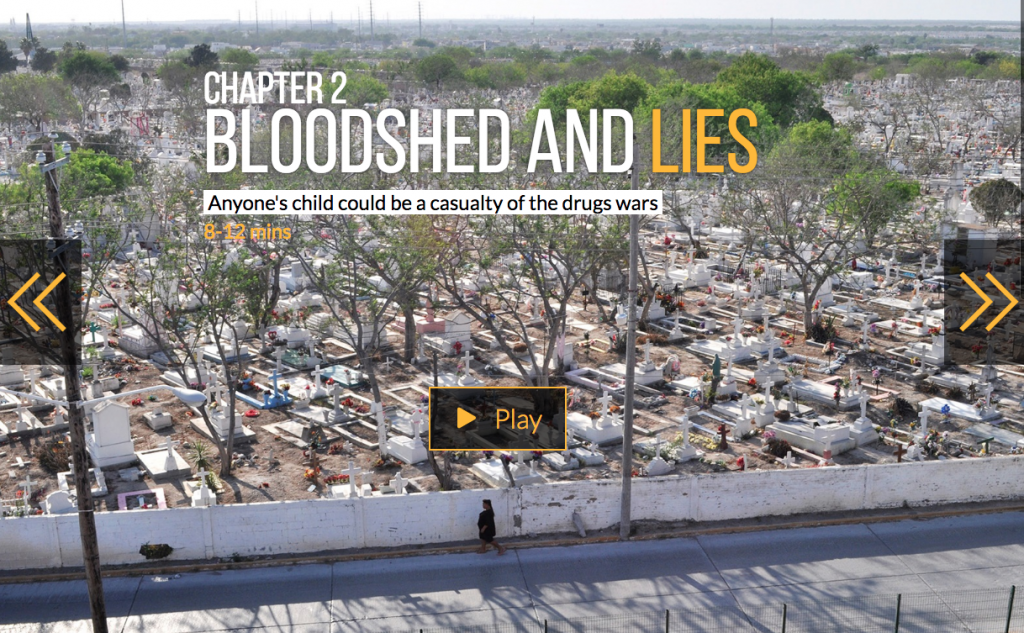 Not only do you learn about the circumstances of the deaths and disappearances of loved ones, but you hear how their families miss them: their smile, their smell. A mother describes her daughter’s character and her ambitions. She becomes not just a number, but a daughter, a friend, an innocent citizen.

Politics is affect. And there is great power in these moving and personal stories to create political change. Campaign Manager, Jane Slater explained how the Canadian government have recently amended national drugs laws, urged by the testimonies of some of the victims which Anyone’s Child Canada works with. They may read statistics every day but it is personal suffering which can move someone to make change.

“If we talk about the war on drugs we will win. They cannot silence our voices and hide our cries of pain, our anger, our fear, or our courage.”

-Alraceli Salcedo Jiménez, who lost her daughter to the War on Drugs.

Check out the i-documentary, which is now also available on mobile devices, here.