Beatriz González is a painter, sculptor and art historian who is lauded as one of the first modern Colombian artists. Her work undeniably has the same energy as Pop Art, questioning the divides between high and low art by taking inspiration from tabloid articles, recreating European classical paintings with an eccentric colour palette, and using cheap furniture as a canvas. However, in her 2015 interview with the Tate she maintains that Pop was ‘part of a discourse happening abroad’ and that, far from being Pop and fashionable, she aimed to be provincial. Her art is intrinsically and intentionally Colombian: her lurid colour schemes are taken from Colombian advertisements and shop windows, and the images she references from clippings of Colombian newspapers documenting national events.

The promotional image for the Reina Sofia’s retrospective in Palacio Velázquez (2018) is one of González’s paintings.  She portrays a young couple, facing forwards and clasping a bouquet of flowers in a typical portrait style. They are rendered grey as if in newsprint, with a faded yet sly expression in the man’s cocked eyebrow, contrasted against a punchy orange and pink background. The Suicides of the Sisga (Los suicidas del Sisga) was the painting that marked González’s move from traditionalist painting to the experimental, provincial style for which she is known today. The painting was inspired by a news clipping about a tragic love story. Two farmers who were desperately in love and devoutly religious, jumped off the Sisga dam on the outskirts of Bogotá in order to display their devotion to each other without besmirching the woman’s virginal purity. Before jumping off the dam, the couple commissioned a photo of themselves, which was displayed in the local newspapers. González was attracted by ‘the plain quality of the printed image, the simplification of the facial features, almost deformed by the discrepancy’, a blurriness that made it artistic. The Suicides of Sisga was the first of her chromatic depictions of newspaper clippings that parodied popular press. She turns throw-away culture – sensationalist modern myths, gossip columns and advertisements – into lasting works of art. 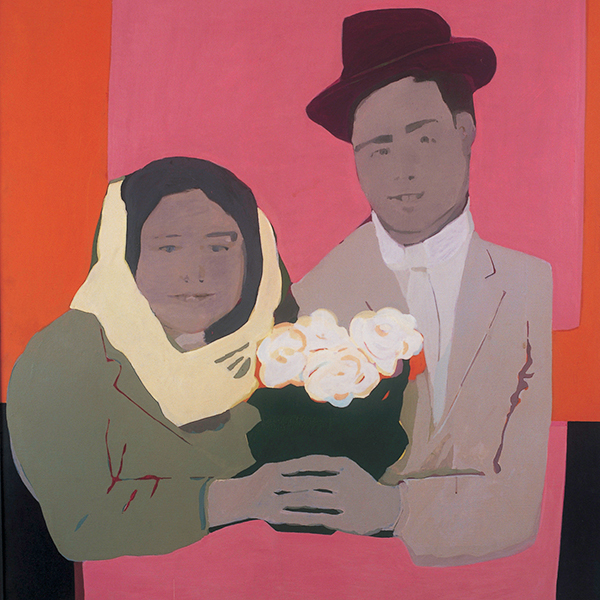 In the main room of Palacio Velázquez, sunlit by the greenhouse-like domes of the ceiling, sit various pieces of wooden furniture, metal bed-frames, a drum and an old television. They are emblazoned with glossy colours as vibrant as car bonnets, with representations of famous European paintings. The Last Table, González’s interpretation of The Last Supper was the first of her metal paintings laid onto furniture, here screaming out from an imitation-wood table, the table rendered bright yellow and the disciples’ beards a sky blue. González clarified to the Tate that her furniture painting was not a response to Leonardo Da Vinci’s artwork: ‘it drew instead on popular prints branded Molinari, and printed in Cali, that were sold in stores selling religious objects. The printer Molinari decided to intervene in the work of Leonardo and included the painter in the scene pretending he was one of Christ’s disciples. The Last Supper was especially popular in Colombia…as a good-luck charm against thieves. In a way the image acquired its own life and many spin-offs were produced.’ Far from slavishly imitating the greats, González intended to convey the universal symbols she encountered in her everyday reality, focusing on their ‘process of transformation through their re-localisation’. Her furniture paintings did not elicit much praise in their 1971 exhibition, however in the catalogue Marta Traba (1977), they were described as ‘marginal art’. González recalls: ‘It was the first time that the term marginality was used in relation to Latin American art. With the furniture pieces I had attached, without realising it, a counter proposal to international art.’ 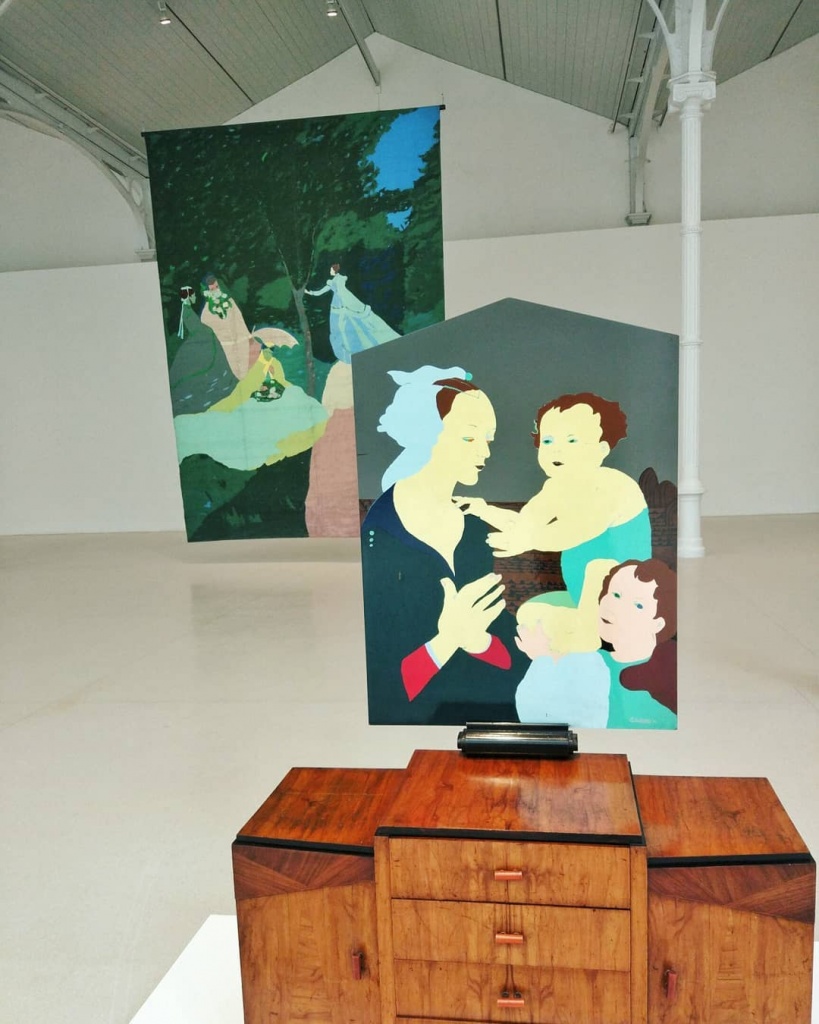 In the 1980s she returned to her artistic renditions of Colombian news clippings, and made her first markedly political work: ‘Interior Decoration’, a large curtain silkscreened with an image of Colombia’s then-president, Julio Cesar Turbay Ayala. In an ironic twist on a courtly painting, González collected pictures of Ayala from magazine gossip columns at a variety of social events, and reproduced them with hallucinatory venom. The president is depicted entertaining guests at a private event, all appearing to chuckle, sip champagne and talk amongst themselves. The white in the photograph is rendered turquoise, so the teeth of the laughing politician and his guests appear vaguely menacing, flashing out from the muted palette of brown, beige and ochre. González wanted to portray him as a grotesque socialite to emphasise his flagrant disregard for the Colombian people. The use of the curtain is symbolic of the masking of the arbitrary detentions and torture perpetrated by his government behind a veneer of glamour. 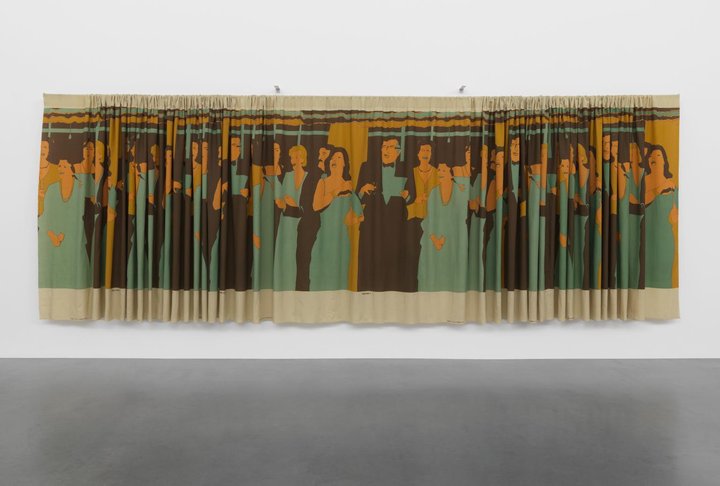 Her more recent works focus on violence and its tragic effects, shown in Palacio Velazquez’s roomful of lurid turquoise corpses floating in dark purple water, representing victims of Colombia’s drug war. In these later works the colours are darker but the contrasts are higher, creating more emotional tension and mystery. Her latest works depict bereft mothers of kidnapped Colombian soldiers. The effects of this distortion of colour could be alluding to larger political questions linked to indigenous people and exoticisation: the crying mothers are dark-skinned, outlined in fluorescent orange or turquoise and adorned in bright skirts that appear tropical, contrasting their washed out, desolate expressions. Her paintings depict violence on both sides of the conflict, provoked by drug lords and paramilitaries, and do not attempt to assign blame, but to make perceptible the effects of violence and immortalise the pain and suffering of a fleeting news report.

González’s works are an assimilation of the world around her and its barricade of images, retold through a blindingly psychedelic lens. She produces historical illustrations, that immortalise everything from presidents to advertisements with an indiscriminate intimacy. Her work is like a treasured scrapbook: a critical yet affectionate depiction of Colombian history and culture. Her work emphasises how we are surrounded by ephemeral images and stories, and immunised to their emotional content, a modern sentiment that she recognised in the 1960s. The transformation from newsprint to portrait unlocks the humour, rage, and sadness González finds in everyday images, and converts them into enduring and provocative works of art.