Monos sends shockwaves. It’s a film to revel in on the screen and to recall with awe and political curiosity. From the prefix ‘mono’ – one, alone – we see fluid individuals fighting for survival in a natural chaos; from the collaboration of a diverse crew we see intense, gory, mystical visuals and a gripping, horrific storyline. Monos is a thriller and eventually a pertinent political question – one to chew on for months after viewing.

The film follows a group of eight young rebels, a faction of the faceless ‘Operation’. With next-to-no authority to guide them, little to eat save a conscripted milk cow named Shakira, and a mission only to keep watch over their gringa hostage, Doctora, the Monos invent games and experiment with each other’s bodies- through violence, sex and military resilience.

There are gory portrayals of survival – in the punishing remote wilderness, the grasps of teenage angst and the wild loneliness of freedom. Director Alejandro Landes has crafted an all-encompassing senatorial critique of the foggy madness of war, and a unique portrayal of Colombia’s unpredictable landscapes.

After Shakira’s death, power structures within the young group shift and an ambush forces the Monos from the misty wetlands covered in vibrant lichen 13,000 ft in the clouds, to the dense and dripping jungle, along the Amazon river.

Their journey follows the path of water, from the highland páramo to the lowland jungle and along the Amazon River. Sound familiar? Monos is something of a malleable Apocalypse Now, relating to a number of conflicts, and a modern Lord of the Flies – presenting the furthest edges we reach before we crack. 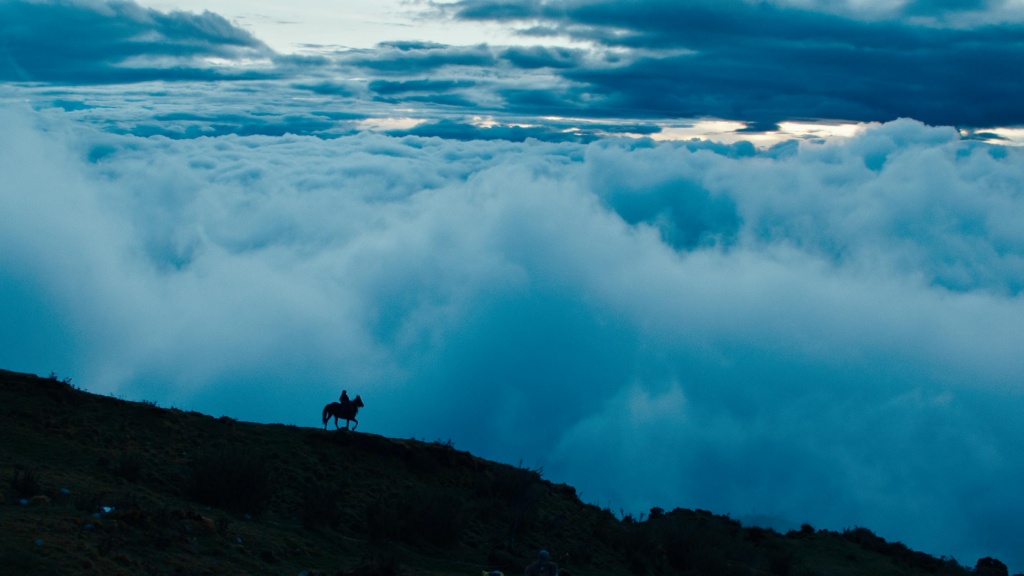 Bodies, minds, and relationships are pushed to their boundaries. It’s a matter of survival. Alejandro Landes says “The conflict of adolescence and the actual conflict of war mirror each other” which is evident throughout. The Castilian word ‘experimentar’ (read: experience) has never been so apt. These two concepts come together brutally. In one scene Sueca (‘Swede’) and the prisoner get close. They both yearn for affection and comfort. This tricky, teary, crazed moment is portrayed viscerally by Laura Castrillón and Julianne Nicholson (I, Tonya, Boardwalk Empire).

The diverse cast of professional and amateur actors from different regions of Colombia includes tattoo artists, students, farmers and an ex-child soldier. Although there are character traits behind each of the noms de guerre (Bigfoot, Wolf, Boom Boom and Smurf), it’s hard to define any of the protagonists – their physical being is an often genderless canvas and their status is defined by relationships and actions borne mainly from instinct. Although they occasionally rat each other out to Mensajero, the only authoritative adult figure, no one is to blame, and all share the spotlight.

Sweeping shots of the steamy Amazon are brought to hyperreality by the acutely tuned ear of Mica Levi, who’s soundtrack, although minimal, creeps up on scenes with a rumbling, sometimes piercing anxiety. There is also the high-pitched identifying call of the Monos, the thump of skin on skin in military training, howler monkeys in the jungle, helicopters overhead. Sounds crack, boom and plop out from the screen, and you find yourself attuned to the joys and anxieties of the Monos.

Particularly alluring is the score that accompanies Bigfoot, Swede and Boom Boom on a mushroom trip in the páramo. The teenagers are fascinated by each other and their harsh but glorious surroundings. Warm wet caves, deep red lichen and tendrils of lime green river moss welcome sexual encounters, laughter, exploration and childlike wonder. It’s a respite from violence and sickening uncertainty.

There are no more than three scenes where Landes allows us to envisage a past or a future to this unrelenting present. When Doctora desperately asks Sueca what she wants – she can give her anything – ‘to dance on television’ is her simple answer, ironically understood by Doctora as ‘a television’. A glimpse at children abandoned by war and a flash of civilisation – which abruptly brings the film to its close – are two horrifying reminders of the politics that underlie this film. It’s a gutsy representation of a mindless conflict and the war that’s in all of us.