Every month, we tell you which Latin American writings we are reading. Taking many different forms and featuring writers stretching the whole of South, Central and North America, we bring to you a wide selection of the modern works that are stirring literary interests. This month we’re all about Iosi Havilio and his novel Paradises.

“There are things, people, you should never see. Why would you? There should be some mechanism to prevent situations from the past repeating themselves, like in a board game, from the start to the end square without turning back.”

Iosi Havilio (1974-) is a Buenos Aires-born novelist, and has received high praise from Argentina’s most influential critics, as well as international recognition. He made a name for himself with his first novel published in 2006, Open Door, which tells the story of this very town outside of the Argentine capital, named after the psychiatric hospital found there. Paradises (Paraísos in the original Spanish) is the sequel to Havilio’s debut novel, although it can be read alone as Havilio delves into a different style. His unique literary style more than warrants exploration.

Paradises follows Open Door’s unnamed female narrator, but the sequel sees her return to Buenos Aires with her young son Simón, following her husband’s untimely death and the repossession of their marital home. Her unique and uncomfortable personality lead her and the story into shadowy corners. In the city, she finds work as a keeper in the reptile house of Buenos Aires zoo, and some new not-quite friends. Havilio creates an inverse paradise: drugs, squats and reptiles seek out the protagonist in all of their states, conscious or not. Through this dystopian existence of displaced people and squalor, Havilio carves out a space in which to present readers with the inequalities resulting from Argentina’s financial crash.

Told almost all in the present tense, Havilio doesn’t stick to prescribed rules when it comes to treatment of time, but he rebels so subtly you barely notice it. However he does so to great effect, helping to make his dystopian creation seem even more distant and impenetrable to the reader. Temporal boundaries appear to be more like Havilio’s plaything in the world that the female character seems to float through. In situations that to many would be overwhelming, the unnamed woman’s reactions are so detached and non-committal, you end up unsure if her paralysis is due to extreme social anxiety or being over-comfortable in herself. Take the scene where the unnamed woman, after injecting her neighbour Tosca with morphine like she does on a daily basis, decides to bathe in Tosca’s bathtub only for her son to walk in. She is unabashed as he stands there, watching her. It is as if Havilio is asking us as readers as to why we would take offense at such situations. Although you spend an entire novel in the inner workings of her brain, you will be hard pushed to reach a sense of familiarity or intimacy towards this character. All the same, Havilio manages to produce a novel to which his reader constantly feels alienated and unattached, yet they can’t help but keep turning page after page. 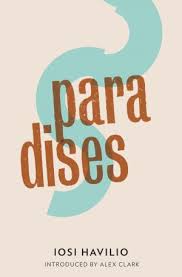 Make sure to check out Paradises, or at least another one of the works Argentina’s exciting novelist. For more information click here.