Written by BristoLatino
Posted on April 16, 2018

What does it mean to share stories of the terrible things you have seen and felt?

Does remembering keep the pain alive?

Should we share our stories or put them behind us?

What if other people want you to forget?

These were the first four questions posed to the group of 100 or so gathered in the Bristol Watershed on Tuesday 10th April. We had come to learn about the first ever Festival de Paz (Peace Festival) organised in order to share creative memory-seeking initiatives from Colombia and Peru.

Colombia is emerging from five decades of civil war, in which hundreds of thousands of people have been killed, and millions internally displaced. A peace agreement was recently reached between the state and the largest guerrilla, the FARC. Peru’s civil conflict ended in the 1990s, but violence is ongoing, and impunity levels are high. Alberto Fujimori, the former President found guilty of crimes against humanity, was pardoned in January after serving less than 10 years of his sentence. Truth and memory serve an important role in these two countries; it is imperative for future generations to be able to move forward. It seems that the Colombian government have recognised the need for memory work, whereas in Peru, authorities have protected silence and oblivion.

The first Peace Festival was held in August 2017 in Cartagena de Indias on the Caribbean coast of Colombia, bringing together 30 peace activists from 16 different organisations, half from Peru and half from Colombia, in order to share their diverse approaches to constructing memory, discovering truth and moving towards reconciliation. 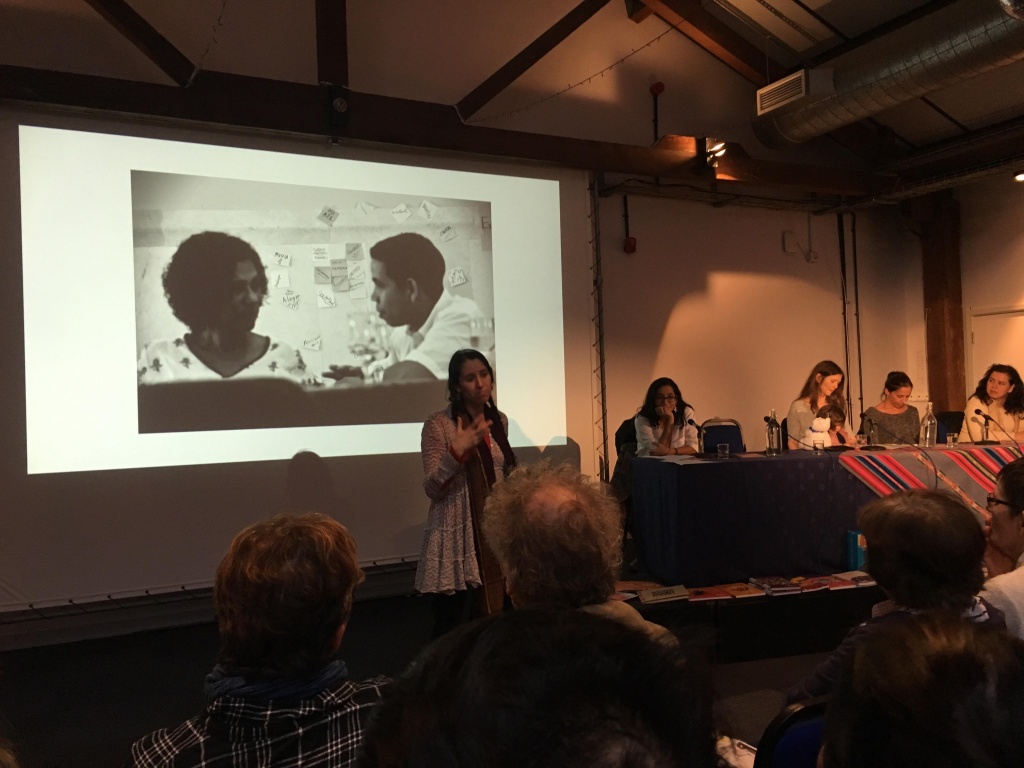 The group at the Watershed was first shown the film produced about the Festival, which shed light on some of the creative ways these “memory activists” help their communities to construct collective narratives. In it, an activist from the organisation Hijxs de Perú (Children of Peru), explains how they use psychodrama as a form of group therapy to help people share traumatic experiences of war. Two Colombian representatives from Tejedoras de Mampuján (Weavers of Mampuján), laugh about their calloused fingers, but are adamant that knitting their stories has helped them to heal: “with every stitch, it felt as if something was being pulled out”.

After the film the audience was given the opportunity to look at some of the art produced during the Festival. In one large mural, a river of sueños (dreams) was chosen to represent memory: evocative of death, pain, remembering and hope. The participants reflected that “the river feeds our dreams for the future”.

Other smaller murals show groups of women united, holding hands and as flag-bearers. María-Teresa Pinto Ocampo, of the University of Bristol, explained how memory workshops have allowed marginalised peoples to challenge the dominant narratives that erase their experiences from official history. Art, drama and poetry have opened up new spaces to tell these stories. They allow for more collaboration and exchange, and restore agency to those who have been silenced. The result is a messy plurality, which the memory practitioners see as a necessary subversion of the simplified, singular narrative.

We then had a roundtable discussion with the 6 (and a half!) panellists: two special invited guests Alejandra Miller Restrepo (from Ruta Pacífica de las Mujeres, a Colombian NGO which set up the Colombian Women’s Truth and Memory Commission and participated in the Peace Festival), Rosemarie Lerner (the Peruvian co-director of the University of Bristol-led Quipu Project) and the University of Bristol team: María-Teresa Pinto Ocampo, Goya Wilson, Matthew Brown, Karen Tucker and her adorable young daughter who sat patiently on her lap, occasionally murmuring in agreement.

One of the most interesting things to come out of the discussion was that the organisers never sought to define memory in the planning stage leading up to the event. Not only does each participant organisation perceive memory distinctly, but so do the individuals who are redefining it every day.

It was positive to see how British funding contributed towards a Latin American event led by Latin Americans themselves. This seems an obvious point, yet often research funding is only allocated to projects in which Europeans visibly bring skills and ‘teach’ Latin Americans. Funds from the University of Bristol (alongside other donors) served to facilitate the event, including the brain-busting task of organising travel around Colombia!

By the end of the session, the four primary questions felt clarified. We saw meaningful and tangible examples of the complex memory work such organisations work hard to carry out.

For more information visit the Peace Festival site. You can watch the film here.