Two Colombian musicians living in Bristol, Han Luis Cera and José Barco, give their opinion on fighting for peace in their country from the other side of the world. Rebecca Wilson reports.

After the referendum 2nd October, the Colombian population has been separated almost completely down the middle, due to divisive political tactics from both the ‘Sí’ and ‘No’ votes. Uribe’s ‘No’ argument has spread hatred, fear and vengeance, claiming that the peace agreement would give too much power to the violent guerrilla group, the FARC, and warning Colombians that the country, if they voted for the agreement, would soon turn into the famine-stricken ‘communist’ Venezuela. The media did not help, equally simplifying both arguments. I spoke to two Colombians in Bristol, who are working to generate constructive, open discussion about the state of the country and the armed conflict.

We discussed the media manipulation from all involved, including the propaganda of Uribe’s Christian Central Democratic Party, perhaps to cover up his fear of being investigated for war crimes. It became a vote between two (unpopular) men: two emotionally-charged opinions. People were not able to see beyond the state and the FARC. José reminded me of the many grassroots groups involved in the process: women’s groups, farmers and students. It’s a shame that (again politically-motivated) Santos alone was awarded the Nobel Peace Prize. “The referendum rules need to change to stop dividing people”, he told me.

Many Colombian Londoners were not able to vote as they weren’t registered in the previous 2014 election, which has instigated an online petition for open registration. There are currently 5 million Colombians living outside the country, which makes up 10% of the Colombian population. Their voice is indispensable for the country. Their perspective, with different experience, offers a valuable asset to the debate.

José discussed how many Colombians have a self-empowered disposition, (which can be charming and powerful, but when people in fact are often misinformed, can be dangerous). He believes culturally and collectively there is a need to humble the Colombian attitude. “We need to learn from others, challenge the way we see things. Think for ourselves”, he told me. Leading up to the plebiscite, “some people simply deleted Facebook friends they didn’t agree with.” Rather than eliminating what we can’t understand, José puts emphasis on discussion, especially with those we trust. “Respectful discussion is what’s important”, Han tells me, “we need to avoid these social media attacks”. During the lead-up and aftermath of the plebiscite, many people voiced controversial opinions they had previously kept in the dark, which added to the vicious divisions. 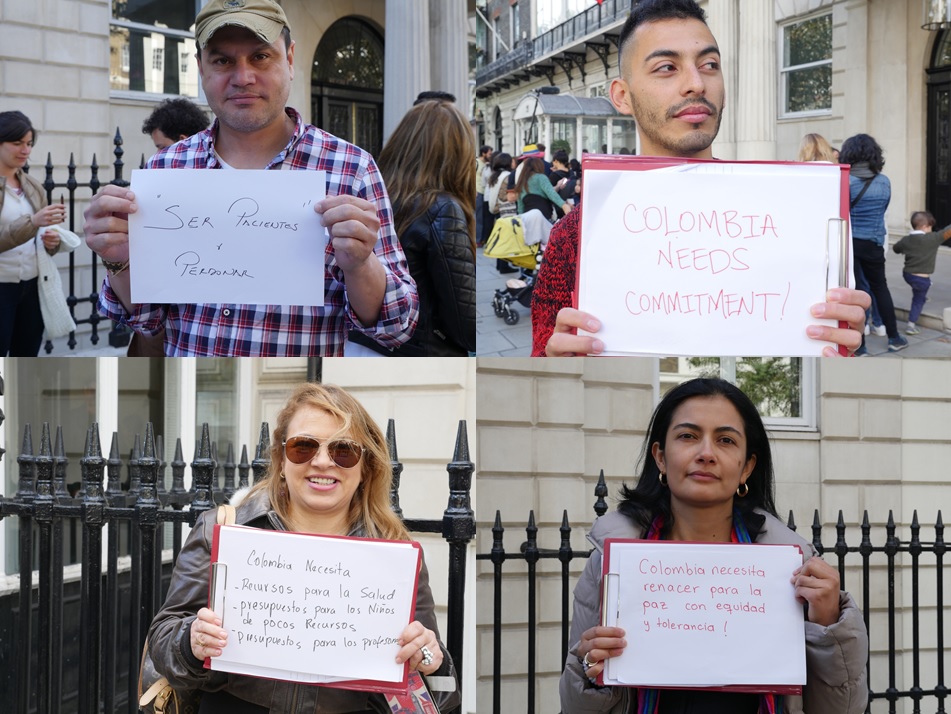 Colombians outside the British Consulate on the day of the plebiscite

Han Luis Cera believes democracy needs to concern more than solely 2 sides. His aim is to be inclusive, the reason for which he runs the social group ‘Bristolombianos’. The initiative began as a meet-up for Colombians in Bristol to have a beer together or dance in the park on a nice day. It has become a way of presenting another face of Colombia, contrary to the one shown by series such as ‘Narcos’ and other media. Its aim is to welcome anyone interested and share interest in Colombian culture.

‘PazAloCo’ is a social media initiative from José Barco, alongside Paola Aldana, Colombian anthropologist living in Bristol, Ben Cheetham, filmmaker and visual anthropologist whom José met travelling in Colombia, Tatiana Garavito, an activist and human rights defender who works with the truth, memory and reconciliation commission of Colombian women in the diaspora, and with the ‘HOPE not hate campaign’. Initially their strategy was to campaign for the ‘Sí’ vote in the plebiscite, although it has become more of a platform for listening to the many different perspectives.

They were in London on the day of the plebiscite filming reactions, messages and opinions of Colombians, including some high-profile musicians. They want to dare people to think differently, beyond their own point of view, and beyond the twisted political rhetoric. “The idea is to open a social window for England to see socially what’s happening in this peace process”, José told me. They are keen for collaborations with local collectives, Colombian groups and people further away.

Both José and Han believe that the process is unstoppable now that it’s begun, but that everyone must be proactive in order not to return to conflict. These organisations and activities put on social pressure for discussion and show support.

They are looking to the positives we can take from the disappointing result of the referendum, “now that it’s clearer what we have in common, we have to use this advantageous position to reach out beyond our circles to find what is between us, what we share”, José told me. What these plebiscites have shown us as ‘democracies’ is that we need to question, analyse and read through the context, not simply “digest news”, as José described. 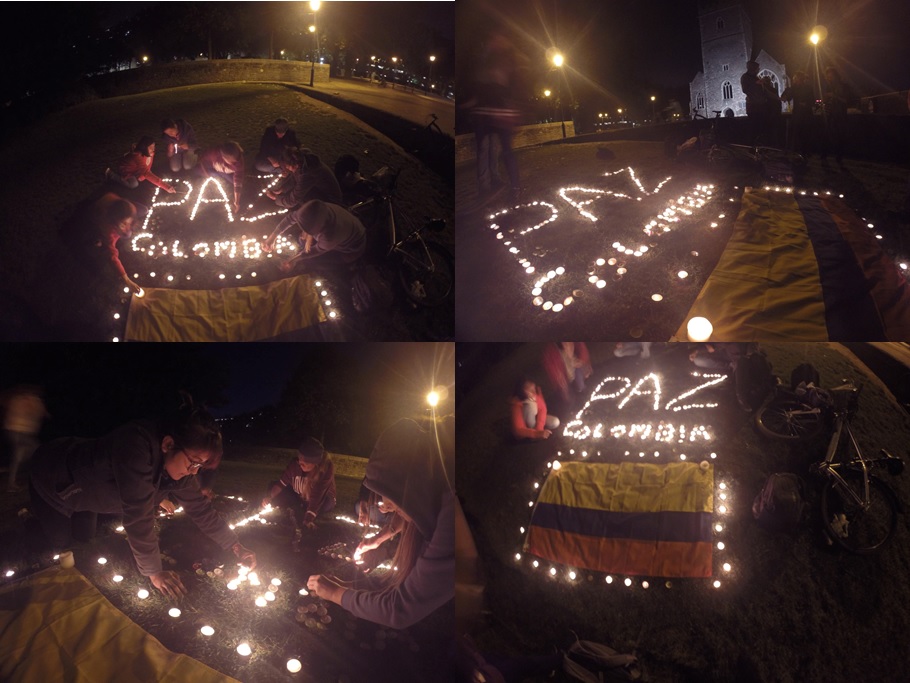 Through Bristolombianos, PazALoCo and ‘Creer es el primer paso‘ (documentary in-the-making) British Colombians are aiming to stimulate thought not simply about what’s right and what’s wrong, whether we say ‘Yes’ or we say ‘No’, but to  be constructive about the present and the future, and to “be more present in engaging and negotiating with people”.

Han composed the soundtrack to Stefany Rodríguez’s beautiful documentary about the armed conflict, ‘Retazos: amarillo, azul y rojo’ which you can watch here.

Along with Colombians in Bogotá, Bristolombianos lit candles and shared hope in Castle Park, the Wednesday following the referendum.

#PazALaCalleUK have organised a March in conjunction with #MarchaDeLasFlores this Wednesday 12th in Bogotá, in which participants will pay homage to victims of the conflict and indigenous Colombians.

This Saturday 15th PaZaLoCo are organising a ‘papayera por la paz’ at the fountains in Bristol’s city centre, featuring cumbias and filming of collective messages of hope.