Sadly, the Bogotá-based modern salsa collective released their self-titled ‘Salsangroove’ just before the new year, so we can’t add their invigorating disc to this list. If you haven’t heard it, carambas, make sure you do. We loved ÌFÉ’s debut but thought we’d make space for other favourites having focussed on this album earlier in 2017. So here it is: a selection of BristoLatino’s best albums of 2017, in order of release. 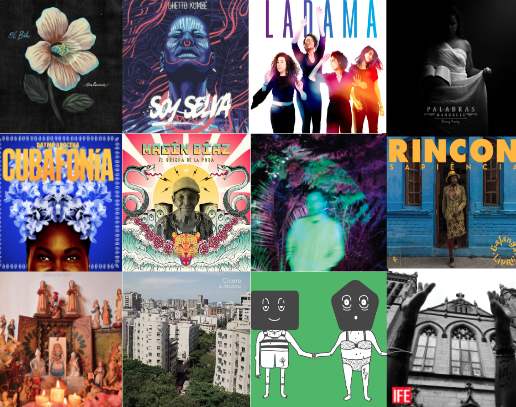 The Cuban singer has been a BristoLatino favourite for a while. She continues to turn heads with ever-strong melodies (It’s Not Gonna be Forever), Santería chants (Eleggua) and classic rumba rhythms (La Rumba Me Llamo Yo), peppered with scat improv. and honest pop (Cómo) which often strays into jazz. The distinctly Carribean Valentine layers changuisero percussion and guitar from the outset, but slips R&B style melodies into the verses, sung in smooth, airy English and French. The track ends with her orotund and contagious laugh. Arocena has full control over her primary instrument- her robust, modulated voice- which she has refined and trained over years of enjoying music, so that she now sings a wide repertoire of genres and features lyrics in over three different tongues.

Magín Díaz, Colombian composer of many well-known and well-loved songs despite never registering them under his name due to illiteracy, passed away this December. The 95-year-old musician was hospitalised in Las Vegas, where he was for the Latin Grammy Gala. Happily, Díaz lived to see the recognition of his work with the recording of this beautiful homage album, meeting young producers who valued his work, his friendship and his outlook on life. The disc was nominated for best folkloric album and best album artwork. Magín Díaz, el Orisha de la Rosa was Díaz’s first solo album, allowing for his genius to be celebrated beyond the folk circles where he is highly regarded. The album carefully and creatively compiles 18 tracks, (featuring legends such as Carlos Vives, Totó la Momposina, Petrona Martinez, and modern stars Li Samuet, Monsieur Periné and Systema Solar) with 18 postcards of artists’ interpretations to accompany the CD. It incorporates a range of Latin American styles, instruments and languages and of course features his most famous composition, Rosa.

MC and producer Rincon Sapiência addresses racial and social issues in his wordplay. Funky basslines (Crime Bárbaro) and rock guitar riffs (Vida Longa) elaborate his rhythmic flow and frequent rhymes. He weaves with constant style through housey-funk tracks (A Volta pra Casa), electric organ phrasing, and classic hip hop scratching. The result is an irresistibly cool sound, proving that Brazilian rap is more than a sexy accent and a call for recognition. The production of this generous 13-track album is interesting and inclusive, as Sapiência brings his art to a more varied audience. It may be that the modern eclecticism of the album is a springboard to worldwide success, but should this be seen as a negative? Sapiência remains true to his personal style, embellished by his own production but steadfast even when stripped back. His message stands, although perhaps more hitting in the affronting, darker, urban tracks such as Meu Bloco, Galanga Livre and Ostentação à Pobreza.

The Bogotá duo made up of highly-respected young musicians Julián Salazar (known for his guitar skills in Bomba Estereo) and Franklin Tejedor (experienced percussionist from San Basilio de Palenque) were among the first popular artists to blend this style of tribal techno. Theirs is a particularly meditative, trance-like sound, that at once urges your body to join the march and lets your mind wander in a purely concentrative state. Perfect for late nights and bright lights, deadline crunches and daily escapes. This album has a more ambient feel, with tracks such as Siempre and Lobos presenting us with natural and electronic calls of the jungle. Rhythms carry a similar energetic agitation to that of their previous techno album, Balnear, whose upbeat tracks deliver an equally energetic discordance but are more based in palenquera and folkloric influences than the futuristic Campanas, Nave and Suave on this album. Make sure to check out their music videos, featuring directors from the Teusaquillo-based CRACK productions, Bogotá.

Catchy riffs and rhythms, with lyrics in Spanish, English and Portuguese. Dynamic and stimulating, you’ll find your fingers tapping, feet clapping and heads bobbing to the quick syncopated rhythms and staccato plucking that busily builds an interesting and fresh album from all-female multinational group, LADAMA. Their name visually and phonetically suits their sound. It’s also made up of names Laura, Daniela and Maria. As well as performing their music at commercial gigs, the group travel around Brazil, Colombia, Venezuela and North America performing and giving creative workshops in local communities.

Leading figure in the post-dictatorship Chilean underground scene, DJ Raff, who started out producing instrumental tracks for hip hop groups around Santiago with little more than a dual cassette tape, sampler and turntable, is still creating smooth, catchy dance tracks which cross over a range of electronic styles. In line with his signature punchy beats and nifty sampling, Movimiento shows DJ Raff has not missed anything in the changing tides of modern music, and cooly retains his status as one of Latin America’s most highly-regarded DJs and producers on the scene.

Fave tracks- Eso No Me Falla

Psychedelic Afro-Caribbean electronic group Ghetto Kumbé take you through a technotronic journey celebrating the indio, the aguas and the tierra with traditional djembe & tambor alegre, marimba and gaitas as well as forest chants even featuring an Andean trompe (mouth instrument which creates a long vibrating psychedelic boing) and flutes. We are taken from Colombian palenques to indigenous jungles to the soil of the motherland, deep into Africa, featuring Ghanaian singer Zongo Abongo on Dagbani Dance. The album is produced by londonense and Afro-bass enthusiast The Busy Twist, an influence clearly heard in Eso no me falla with its teasing and slightly haunting melodies reminiscent of British grime and dubstep, of course carried along by meditative spanish phrases and the catchy scratchy guacharaca. It is a ritual celebration of the mixed rich origins of Colombian music, unsurprisingly titled Soy Selva– I am jungle, and composed by three of the most skilful musicians from the modern Colombian scene: El Guajiro (singer of La 33, La Otra Banda and former singer of Sidestepper), Chongo (percussionist of Sidestepper, Toto La Momposina, Ondatrópica, among many others) and Doctor Keyta (African music specialist and percussionist in the dancing company “Zarabanda” & L’arpeggiata).

We all form part of the natural world in which we are now accustomed to the beeps, clicks and screeches of a more industrialised space. But if we listen, we can hear the softer sounds of the forest. Collaborations on this more-lyrical album from British producer, Robin Perkins, represent a world still centred in but not exclusive to Latin America and the Andes, featuring Dina el Wedidi’s Egyptian vocals on the track Complete. Having lived a couple of years in Mexico, Cumbia and Son Jarocho now converge with his signature Andean instrumentation style carried along by Afro-Colombian rhythms. El Buho’s atmospheric and carefully put-together Balance presents natural details of wonder (leaves crunching underfoot, rain falling into cyclic rhythms and birdsong), delivering us the message alongside synthesized basses and illuminating looping that perhaps modernity doesn’t have to compromise the health and wealth of our natural world. As his first full-length record, Balance gives El Buho the time/space to present us with his carefully-contemplated and sereney-crafted musical vision of the world today.

Cícero’s fourth studio album takes a step away from his typically serene and distinctly Brazilian pop-rock, towards more syncopated, up-tempo rhythms, with strong percussion and brass notes from the Albatroz band who bring Cícero to a much bolder musical position despite his aforewon popularity. Returning from a couple of years living in Sao Paulo, Cícero returned to a chaotic and agitated Rio de Janeiro. This comes through in the new-found strength of this album, in its rhythms which acknowledge the roots of Rio, and its tumultuous brass and timpani which raise the voice of the people. A step forward for a well-established musician in need of new vibrance.

Listen to the December podcast featuring our fave tracks from these albums, plus music from Salsangroove and Danay Suárez…