The VIA Arts Prize, the UK’s only Ibero-American themed visual arts competition, invites artists to create works inspired by Latin American, Spanish and Portuguese arts and cultures. The prize is organised by the Association of Cultural Attachés of Latin America, Spain and Portugal (ACALASP) with support from  People’s Palace Projects and Instituto Cervantes. BristoLatino’s Helen Brown discusses the aims of the prize with the Embassy of Brazil’s Cultural Attaché Paula Rassi.

The VIA Arts Prize is an exciting opportunity for burgeoning UK artists to create work inspired by Ibero-American arts and culture. Those shortlisted for the prize will share a group exhibition in the Embassy of Brazil’s Sala Brasil gallery in London. The winners are chosen by a jury of esteemed figures in the art world, such as Chilean sculptor Fernando Casasempere and Andrea Harrari, director of Mayfair art gallery Jaggedart, and co-founder of ARTE BA, the contemporary art fair of Buenos Aires. The first prize winner will receive a solo show at the Embassy of Brazil in the subsequent year, alongside a £5,000 prize, and the runner up will receive £2000. The call for entries closes at 23:59 on the 30th September 2019.

Whilst in previous years specific themes were chosen for the prize, such as the theme ‘Utopias’ or ‘Dialogues,’ this year the prize has no specific theme. For the 2019 prize, artists will have more freedom to explore the core aim of the prize: creating original artworks inspired by Ibero-American arts and culture.

Helen: When was the Association of Cultural Attachés of Latin America, Spain and Portugal (ACALASP) founded and what are its aims?

Paula: The Association of Cultural Attachés from the Embassies of Latin American Countries, Spain and Portugal (ACALASP) was founded in 1989 and is a non-profit organisation dedicated to promoting our countries’ art and culture in the UK. As a group, we engage with influences shared between our regions, a result of our rich history of cultural exchange; at the same time, we are dedicated to promoting the incredible diversity of Latin American, Spanish and Portuguese art and culture, and its importance in the UK today.

Paula: Ibero-American art is receiving an increasing amount of attention from globally respected art and cultural institutions. The VIA Arts Prize specifically seeks to further cultural awareness of Latin American, Spanish and Portuguese arts and cultures in the UK. As such, by encouraging people to engage with the nuances of regions through art, the Prize is hoping to aid their integration into the fabric of UK culture itself. Raising the profile of Ibero-American nations will benefit current Ibero-American UK citizens as it will strengthen their sense of ownership of both Ibero-American and British heritage, and perhaps even encourage deeper reflections of the ways in which the two have and continue to influence each other.

Helen: How do you think a specifically arts focused initiative helps to raise the profile of Ibero-American nations?

Paula: Art is an important part of our collective history and, in our opinion, one of the best tools to bridge cultural differences and create lasting, meaningful connections. Creative expression is clearly a very personal endeavour, yet it also allows people to move beyond their personal sphere and engage with a wider cultural discourse. The VIA Arts Prize encourages entrants to explore and immerse themselves in Latin American and Iberian culture. By elevating Ibero-American nations as the source of inspiration, the Prize is firmly asserting the importance of Ibero-American heritage within the UK. 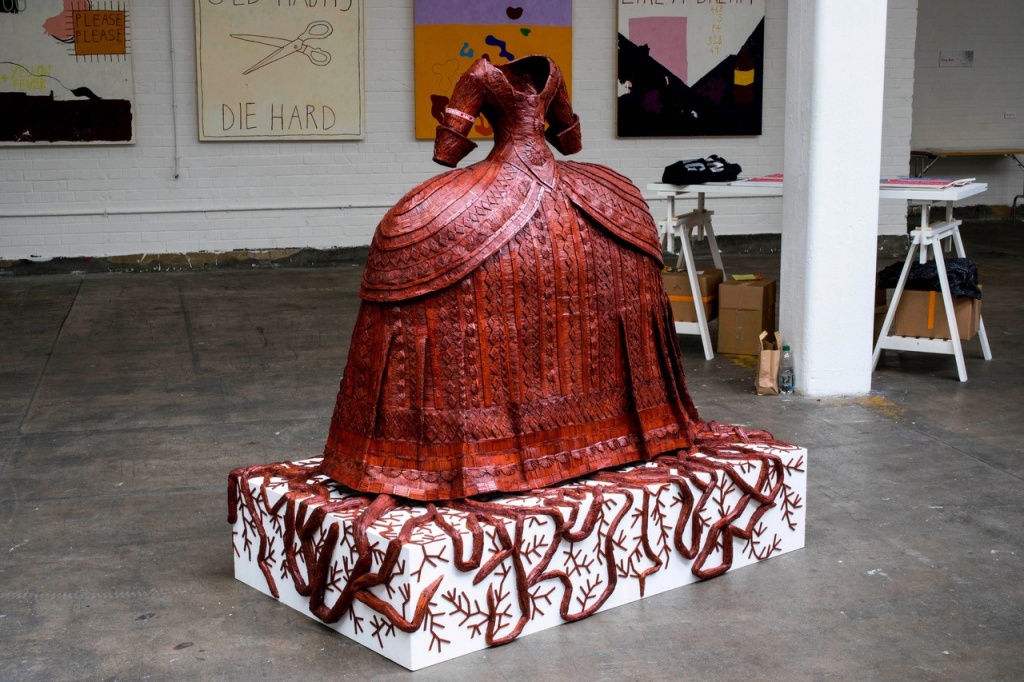 Helen: How have previous works in the competition explored the colonial history between these nations?

Paula: Last year Sabrina Collares was named the jury’s special commendation thanks to her striking sculpture Raízes do Brasil. Collares specialises in Postcolonial art and culture as well as the influence of visual language in the decolonization of traditional Eurocentric narratives. Collares’s piece is a 18th-century Baroque dress inspired by a painting of Carlota Joaquina, The Princess of Spain and Queen of Portugal (1785), by the Spanish artist Mariano Salvador Maella. The artist covered the dress in thousands of small pieces of wood-like material (specifically, MDF or medium-density fireboard) and made it to scale to fit a 10-year-old child: the same age that Carlota got married to Dom João VI. The dress was attached to the plinth by roots which contaminate the whole space. A poignant historical commentary on colonial times.

To apply for the prize, visit the VIA Arts Prize website.