At a talk organised by English PEN at the Free Word Centre in London, English journalist Gaby wood spoke with Mexican investigative reporter Anabel Hernández about the newly released English translation of her book, The True Story Behind the Missing 43 Students. Hernández discussed her research into this unsolved mystery, and the evidence she found about the Mexican government’s involvement in the disappearance of the students. BristoLatino’s editor-in-chief Helen Brown reports.

Anabel Hernández is an extremely brave person. She is best known for her investigative journalism about drug trafficking, and for pointing out the seedy links between the drug cartels and the Mexican government. Hernández had an interest in journalism from an early age, but had to quit two newspapers, Mileno and El Universal, for castigating her for reporting about the government. Hernández’s work is risky: according to the Committee to Protect Journalists, 108 media workers and journalists have been killed in Mexico since 1992, and the majority of these murder cases are never solved. Despite these very real dangers—Hernández has received death threats in the past and had her home broken into—she is determined to reveal the corruption of the Mexican government. As a result of this mission, much of the privacy that most of us take for granted she can no longer enjoy, as she needs two security guards giving her 24 hour surveillance to keep her safe.

Hernández speaks angrily and passionately, the fire of her rage in no way dimmed by  years of research. In 2000, her father was kidnapped and killed, and in an interview with The Independent, she claimed that the police refused to investigate his disappearance until they were bribed. This tragedy seems to only fuel her incredible determination to seek justice, and her endless empathy for the family members of other victims. When she worked as a journalist in Mexico, people would come to her office and report the disappearance of their loved ones, but as soon as she arrived to investigate, all of the evidence would be gone. Frustrated with sensing the collusion between the government and the drug cartels, but never being able to irrevocably prove it, the disappearance of the 43 students was a chance to finally incriminate the Mexican government for the abduction of its own people.

On September 26, 2014, a group of students from the Ayotzinapa Rural Teachers’ College were on their way to a demonstration in Mexico City for the anniversary of the Tlatelolco massacre, when the Mexican military and police killed hundreds of students and civilians attending a peaceful protest in Mexico City in 1968.  These students set about to “commandeer” buses from rural towns, a common practice in Mexico, in order to change the direction of the buses to take them to the protest in Mexico City. However, as they arrived in Iguala, the five buses they commandeered were attacked, killing six students and injuring many more. Then, two buses, holding 43 students, disappeared. The government’s official narrative was that the students had come to protest at an event run by the mayor of Iguala, José Luis Abarca, who then ordered the local police to get rid of them. The police then supposedly handed over the students to Guerreros Unidos, a local drug cartel that is allegedly associated with Abarca’s wife. The government then claimed that Guerreros Unidos murdered the students, incinerated their bodies at a landfill site, and threw their ashes into a river. Abarca and his wife, along with dozens of local police officers from Iguala and the neighbouring town of Cocula, were arrested and charged.

Hernández found this story unconvincing. Iguala is the headquarters of the federal police and the Mexican army, who both claimed to have no knowledge of the incident. Hernández learned that the mayor of Iguala doesn’t officially have the power to control the actions of the police in Iguala, a state principally under the control of the army. She also noted that his event, that he was supposedly saving from rowdy protesters, went swimmingly—“he was spotted eating tacos on the street with his family afterwards. TACOS,” she explained incredulously, painting a very different picture to the bloodthirsty, all-powerful mayor the Mexican government portrayed. She discovered through leaked government documents that the army had been monitoring the buses for three hours prior to their arrival in Iguala, debunking their claims of ignorance. She interviewed the surviving students, and during her talk in London she showed clips of the videos they had taken of the attack on their phones. The footage was of a blurry street view with the sound of gunshots and confused shouting. In one video, the attackers pick up their bullet shells in order to hide the evidence of the incident, and the man filming shouts at them to stop. She learned from the surviving students that alongside the police officers, people in plain clothes were also firing at them. A forensic group collected the bullet shells at the crime scene and found that at least 19 were shells manufactured by the Mexican government and provided exclusively for the army. Hernández contacted the army asking if any of their bullets had been misplaced or if any civilian or police member had access to them, both of which they denied, unwittingly proving that they had been present at the attack. After the Spanish version of her book was published in 2016, this inquiry about the army’s bullets disappeared from the government’s documents. 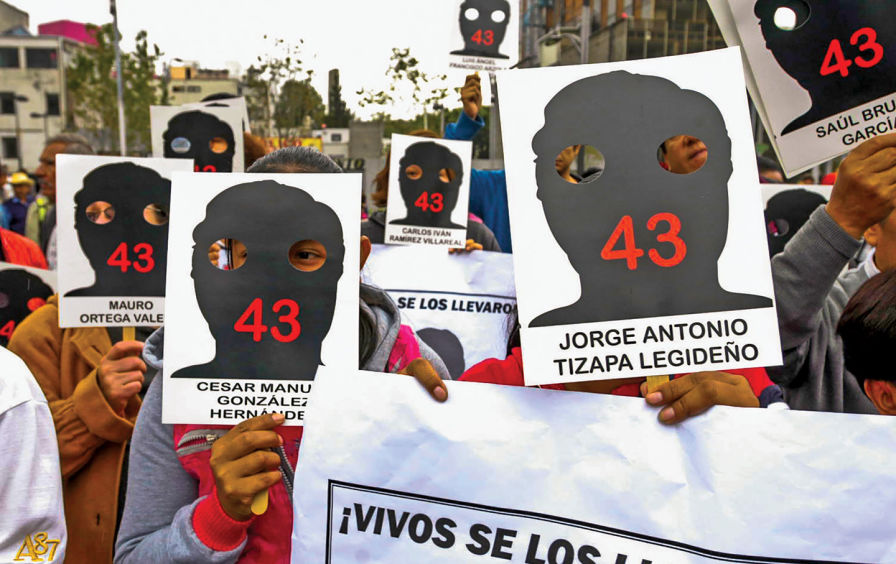 Hernández was fascinated that of the five buses that were commandeered by the students, only two were abducted. She was also suspicious that this attack had happened in Iguala, a busy city, on a Friday night, yet no witnesses were coming forward. Through an informant from a drug cartel, she discovered that the two buses that were abducted were carrying 2 million dollars worth of heroin. Hernández’s theory is that after the cartel realised their buses full of drugs had been taken by the students, they contacted the federal police and the army, who began tracking the buses and then attacked them. The army abducted the 43 students on the two buses carrying the heroin, believing them to be more aware of the drugs on the buses than they were. The government then covered it up, meaning that former president Enrique Peña Nieto (2012-2018) lied about the fate of the 43 students for four years of his presidency. This isn’t the first evidence of Nieto conspiring with drug cartels. Joaquín “El Chapo” Guzman, the former leader of the Sinaloa cartel for 27 years, suspiciously escaped multiple times from maximum security prisons before being caught in 2016 and extradited to the US for his trial. Last week, El Chapo’s lawyer claimed that the Sinaloa cartel bribed Nieto and his predecessor Felipe Calderón  to engineer their safety and impunity.

Hernández also investigated the imprisoned municipal police officers and members of Guerreros Unidos who were supposedly responsible for the attack. Although they had all signed confessions, when Hernández looked at the medical reports alongside their testimonies, she saw evidence of brutal torture, including rape. She accessed the numbers of the wives, mothers and family members that the suspected criminals had used as their one call from the police station, and began to contact them to figure out the true story behind their arrests and subsequent confessions. These family members had to deal with not only the torture and incarceration of a loved one, but also years of unfair  discrimination on behalf of the community since the massacre. Frighteningly, one of the wives Hernández interviewed also disappeared, showing how dangerous speaking out against the government is in Mexico. In March of 2018, the United Nations also published a report accusing the Mexican government of using torture to force confessions in the case of the 43 students.

In June of 2018, a federal court ordered the government to investigate the disappearance of the 43 students under the supervision of a truth commission led by the Mexican National Commission for Human Rights and the families of the victims, also using evidence of international experts in forensics and human rights. This new investigation will hopefully facilitate the release of those wrongly accused of the kidnap and murder of the 43 students, and shed light on the government’s questionable investigation into the truth of the case.

Distressingly, the disappearance of the students is not an unusual event. Hernández explained that disappearances in Mexico have been rife since the 2006 war on drugs began during Felipe Calderón’s government. Although evidence is often scarce, many of those who have disappeared were last seen at army checkpoints, reinforcing the link between the abductions and the state.  The families of the victims of the massacre were already from a marginalised group within Mexican society. The Ayotzinapa Rural Teachers’ College the students attended boasts leaders of 20th century Mexican guerilla movements as part of its alumni. The school is in a poor area of Mexico and many of the students came from indigenous backgrounds. However, miraculously, this case became a symbol of the corruption of the Mexican government, and was met with national and international uproar. In 2014, the tragedy of the 43 students mobilised half a million people to march down the main avenue of Mexico City, and protests have continued every year on the anniversary of their deaths. 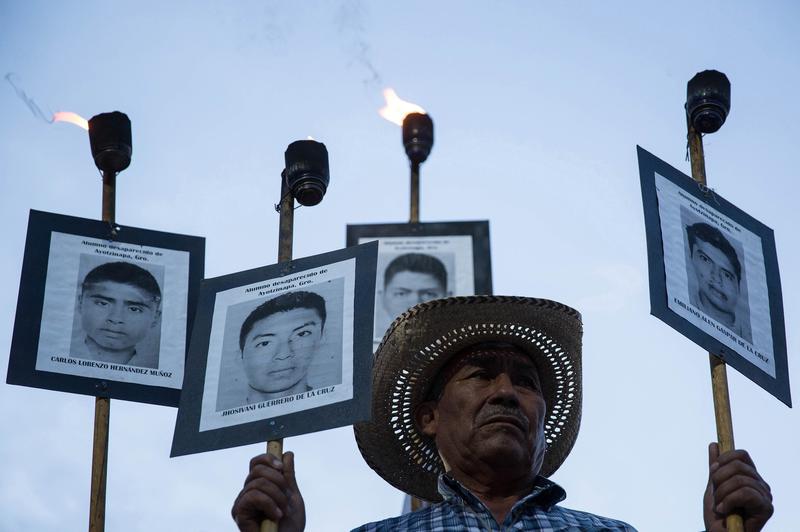 The families of the missing students are still desperate to find the bodies of their loved ones, no matter what state they’re in, and Hernández is hopeful that they will be found soon. The new president of Mexico, who will be sworn into office on the 1st of December, Andres Manuel López Obrador, has promised to continue with the truth commission and find the bodies of the disappeared. However, he has also promised amnesty to drug traffickers. An estimated 98% of crimes in Mexico are met with impunity, and Hernández feels that more amnesty is the opposite of what is needed. She also emphasised the international community’s role in the Mexican drug war, and the collusion of politicians across disparate countries that allows the international drug trade to continue. Hernández urged the audience to be aware that any involvement in the drug trade, whether buying or selling, impinges the freedom of other people across the globe.

Anabel Hernández’s book, The True Story Behind the Missing 43 Students, is available on Amazon and from other retailers.