Every week we will be sharing one of the pieces from our first ever print magazine which discusses all things Latin America! We hope you become inspired to read and learn more about this fascinating region of the world. This week, Edie Essex Barrett writes about her time visiting Easter Island, a remote volcanic island located off the Pacific coast of South America.

Easter Island’s original name, ‘Te Pito te Henua,’ translates as ‘the navel of the world.’ With the nearest inhabited land 1,289 miles away, reflecting on how the original inhabitants arrived there approximately 2,000 years ago is awe-inspiring. Even now, getting to ‘Isla de Pascua’ (Easter Island’s Spanish name) feels lengthy. A six–hour flight from Santiago, Chile or a nine–hour flight from New Zealand, this sub-tropical Polynesian island really does feel in the middle of nowhere. Today, Easter Island (or ‘Rapa Nui’ to those indigenous to the island), is famed for its moai statues. These iconic rock faces, of which there are approximately 900, are shrouded in mystery. Even presently, researchers are trying to discover why the statues were made, why they were placed where they were and why the original Rapa Nui society collapsed.

It has been a long-held view that the statues were constructed for religious reasons, as the majority of the moai have their backs facing the water, the location of the Rapa Nui spirit world. This led researchers to believe that the moai were overseeing the island’s inhabitants. It took roughly two years to carve the moai from the volcanic rock faces, with statues ranging from around two to nine metres in height. How these were transported, however, particularly given that they weigh tonnes, remains debated. Recently, research has emerged that suggests the sculptures were placed near locations of fresh water, using the volcanic rock to boost the soil’s fertility. Theories about the Rapa Nui’s demise chiefly centre around either a tribal war or an environmental catastrophe. It is mysteries and ambiguities such as these that draw over 80,000 tourists to Easter Island annually. 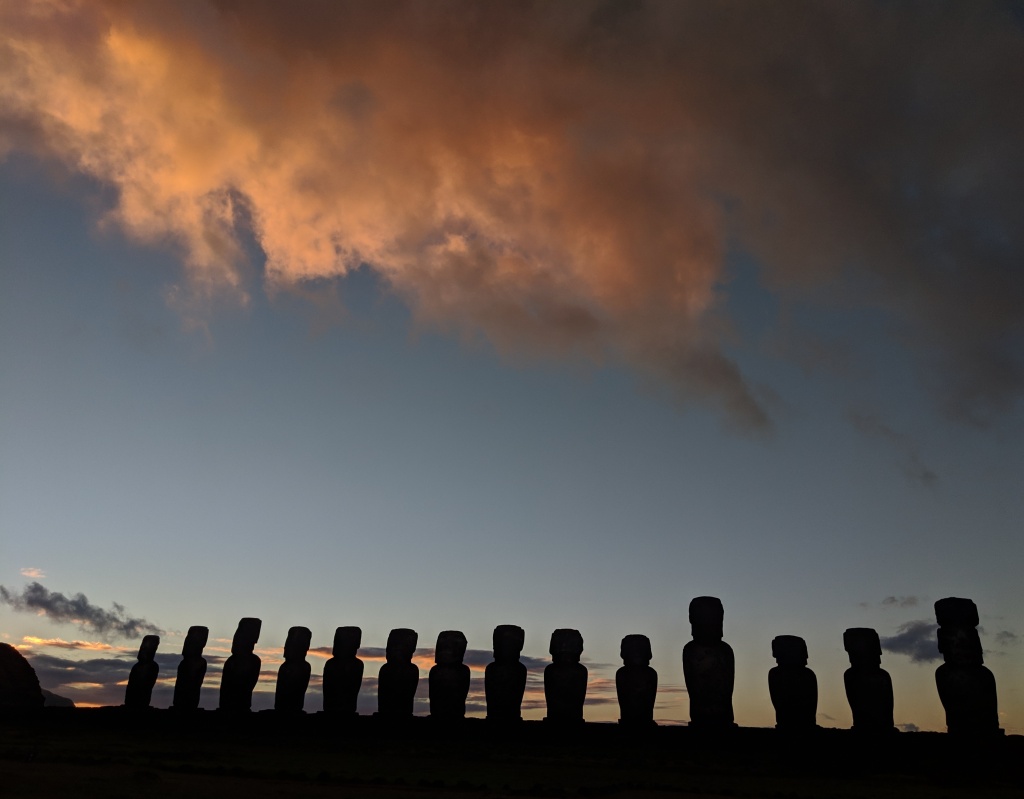 The most famous place to visit is the Ranu Raraku quarry, where each moai was originally carved. Here, the statues eerily protrude from the ground and rock face at different angles and various stages of completion, as if they were suddenly abandoned. It was here that the largest moai was found, which, if completed, would have stood at nearly 21 metres. There are two beaches on Easter Island, the most famous being Anakena, a tropical beach with white sands and crystalline turquoise sea, which is supposedly where the original Rapa Nui people first arrived on the island. Behind the picturesque beach are seven extremely well–preserved moai, which were recently discovered buried under metres of sand. Ovahe beach is special because it is so close to an ancient ceremonial crematorium and ancient Rapa Nui residences. However, it is only accessible at low tide, as you have to climb over volcanic rocks to reach it, avoiding the waves as they crash against the cliffs beside you.

Some of the best experiences on Easter Island are the sunsets and sunrises. With a completely empty horizon, the sunrises at Tongariki are particularly special – for most of the year, the sun rises directly behind 15 moai, making for some stunning photo opportunities and a magical experience. The Ahu Tongariki site, right by the ocean, is home to five moai which were partly destroyed by a tsunami in 1960. Every evening, tourists flock here to have picnics and drinks and sit on the grassy hills as the sun sets behind the imperfect but resilient moai statues, with the sounds of the huge pacific waves crashing behind them. 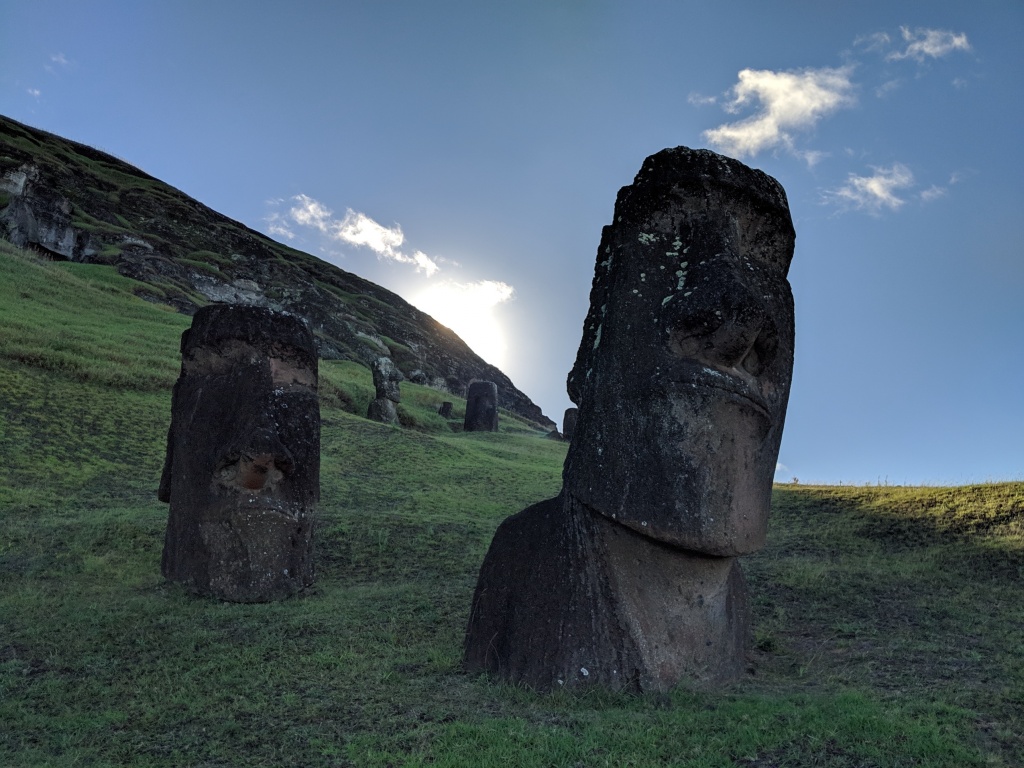 After this, many tourists head back into the only town on Easter Island – Hanga Roa – to watch a traditional dance show. While it initially seems that this is just a tourist trap, you soon learn that the Rapa Nui see the teaching and the performance of their dance as a way of preserving and promoting their culture among the younger Rapa Nui generations, especially as the dances often narrate stories of the Rapa Nui people’s history.

Travelling to Easter Island can be a breath-taking and unforgettable experience, however, many tourists remain ignorant about the various political movements occurring on the island. British tourists are often met with hostility, given that the British museum has one of their moai statues following a British expedition to Rapa Nui in 1868. An emotionally charged issue, the governor of Easter Island has begged the British Museum to return the statue for years. To the Rapa Nui people, the statues contain the spirits of their ancestors, with each statue said to represent a tribal leader. Only recently has the Museum agreed to loan the statue back to Easter Islanders. 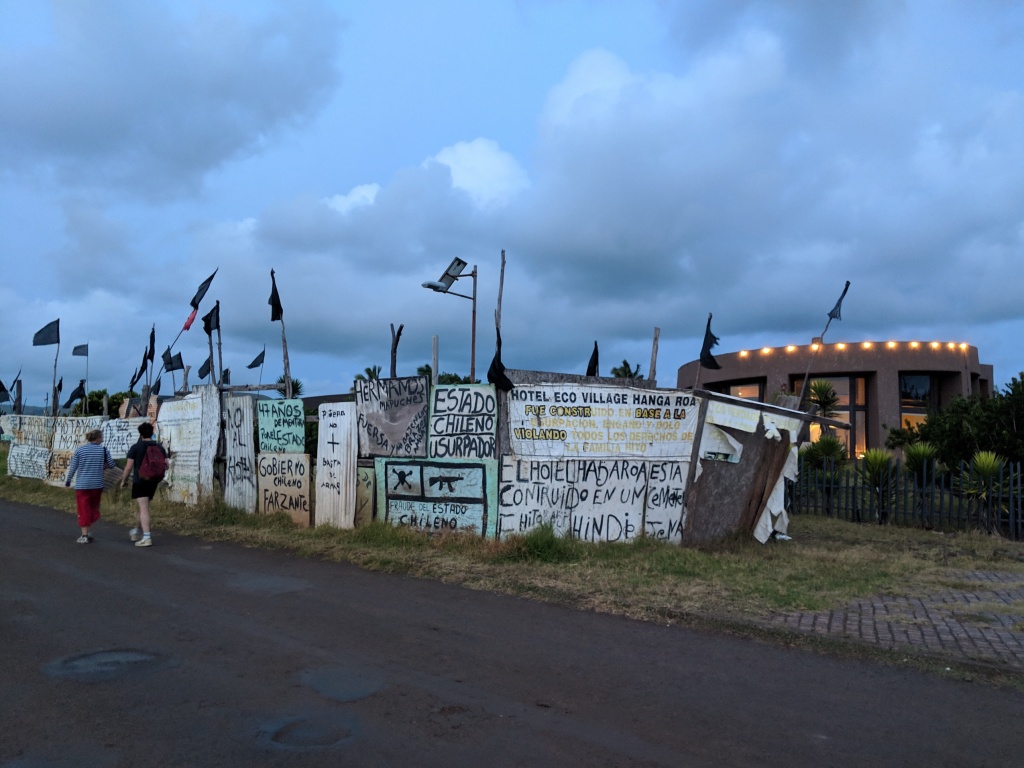 In addition, there are recurrent protests relating to Chile’s ownership of Easter Island. Built in 2010 on an emblematic Rapa Nui cemetery, the luxury ‘Eco Villand & Spa’ hotel is surrounded by placards and black flags, with statements such as ‘fraude del estado chileno’ (fraud of the Chilean state) and ‘47 años de mentira por el estado chileno’ (47 years of lies by the Chilean state). For a decade, many Rapa Nui people have been petitioning the Chilean government over land rights and tourism. Instead of being under Chilean rule, many of the indigenous population would prefer to be considered part of Oceania, which logistically makes sense, given that Easter Island is closer to Tahiti than Chile.

A major issue for many Rapa Nui people is the quantity of tourists who come to the island and behave disrespectfully inside the national parks. This is of particular concern given that the legendary moai are already damaged by climate change and free–roaming livestock. In response, the Rapa Nui people have previously blocked the only airport’s runway, preventing the two daily flights from landing. Now, even touching the moai results in a large fine, and removing any natural object, even a stone from the beach, is an arrestable offence. Causing physical damage to any of the statues can result in imprisonment and a ban for life.

While I highly recommend travelling to this wonderful, historically significant island to experience the unique sense of isolation and mysticism that Easter Island brings, it is important to be wary of the Rapa Nuis’ political struggles, and to be respectful of the priceless artefacts that are scattered everywhere you look.