BristoLatino editor, Rebecca Wilson visited the women behind Nailah, who make very special material dolls in Bogotá for clients all over the world.

I found myself in a cosy, incensed apartment overlooking the mountains, with sloped buildings poking up through the twilight scene. Marta was a hippie in the sixties, which explains the incense. She is a designer, and her daughter Leila, since she was 6 years old has mimicked her, mirroring her mother’s stitches to create singular fabric dolls dressed in detailed, unique outfits. Along with Marta’s sister, Dolores (Lola), the three women search for fabrics, beads and accessories to create individual dolls with care. Although they’ve had commissions from France, Czech Republic, Germany, Sweden, Brazil, Argentina and the USA (not including the orders from the Pacific and Caribbean coasts, Cali, Medellín and other parts of Colombia) and have found great popularity, they are not interested in selling their brand, creating a factory or trying to mass-produce their creations. The beauty is that each one is sui generis, finely crafted with care for a specific client. 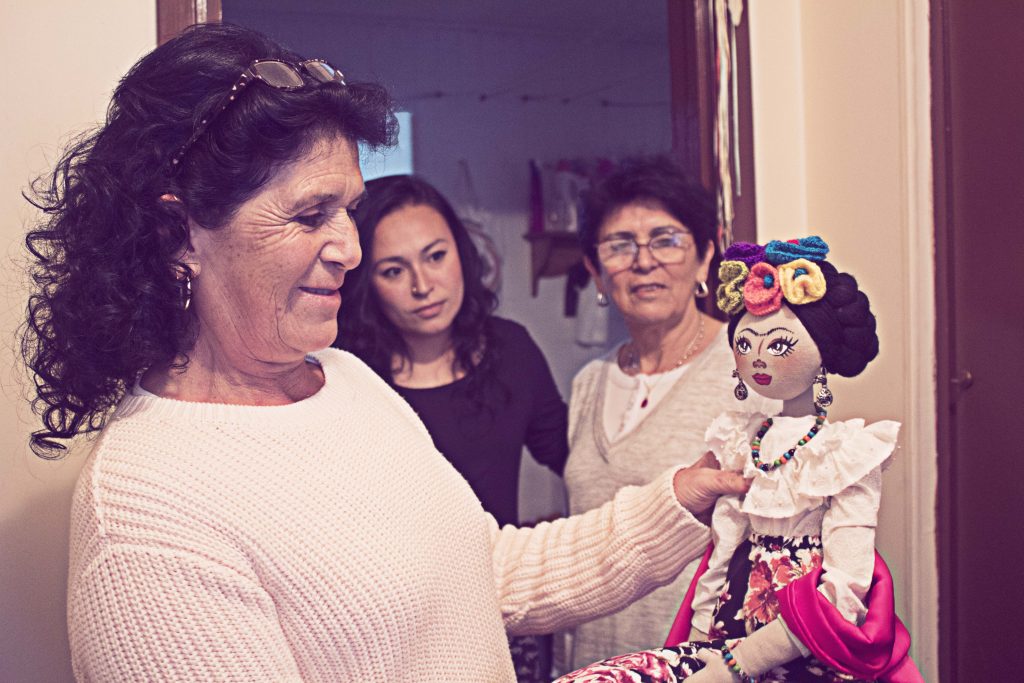 Whilst completing a course in Afro-Colombian studies at the Universidad Nacional in Bogotá, as part of a creative anti-discrimination project, Leila used her her childhood skills to create black dolls that break stereotypes in Colombia. As Leila informs, the only black dolls you find are replicas of the stereotypical palenquera woman in traditional brightly-coloured dress, carrying a fruit bowl on her head. Afro-Colombians make up just over 10% of the Colombian population, but they are a hugely underrepresented. Leila wanted to create dolls that represent the average Colombian black woman.

Leila is a hardworking, hands-on kind of woman. She works on the dolls with her mum and auntie Lola when she gets back from Sumapaz, a region once settled by the pre-Columbian Muiscas and where Leila now does social work, bringing food to the families who live out on the biggest paramo in the world.

Nailah, a common African and Arabic name meaning “she who is destined for success,” is, subtly, a social movement.

Over camomile tea and home-baked carrot cake, Lola opens a dark wooden and metal chest pulling out intricate, fine, long-legged fabric dolls. Their afro hair is gorgeously woven from wool, and metal hoop earrings hang from their ears. Their faces are painted with red lips and their eyes glint under long lashes and bold eye shadow. Their bespoke outfits are spectacular.

The experience is different for each client and a doll can represent many things: a perception of beauty, an extension of ourselves, a friend to interact with, a representation of someone we admire, a wish…a revenge. Each doll is customised and handmade. The ladies seek out fabrics and accessories to style the dolls in the image of their representee.

Nailah often receive requests from women and mothers looking for personalised dolls that represent themselves, a friend or their daughter. Women in Sweden have requested black dolls that represent their white children. Even the Norwegian consulate has commissioned a black doll of herself. Nailah, a common African and Arabic name meaning “she who is destined for success,” is, subtly, a social movement. Through their care and individuality the Nailah dolls allow for each person to count, to be appreciated and to be represented—in colours, textures and scent. 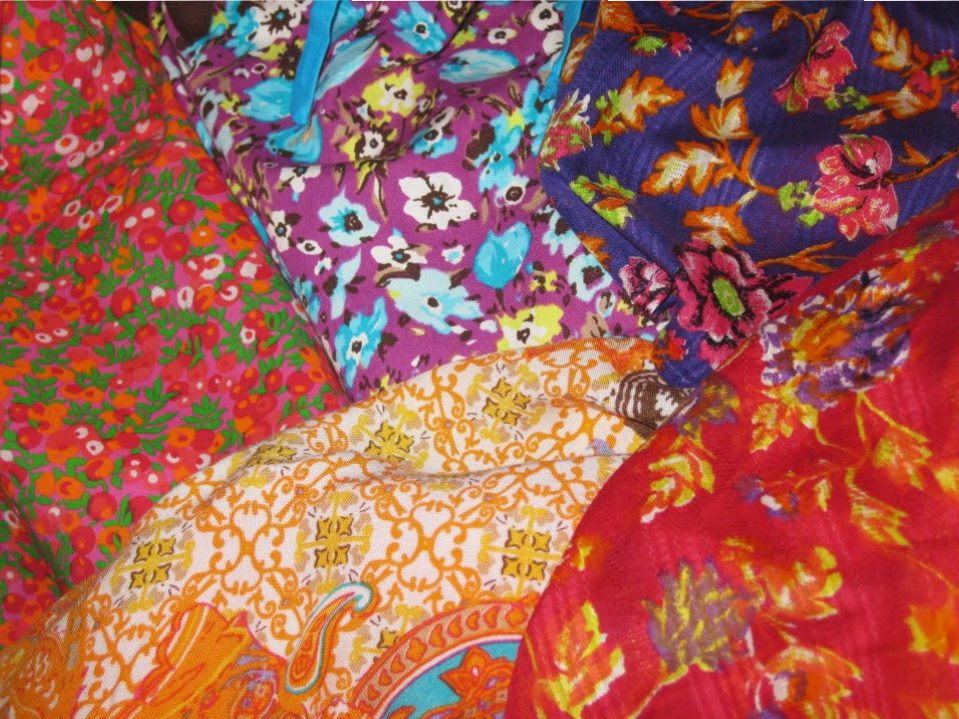 Do you remember styling (and cutting—we all had to learn for ourselves, didn’t we?) the ‘beautiful’ (synthetic) locks of your dolls? A Berber from New York contacted Nailah asking if they could create a doll for his son. It would represent his culture, so that in New York he could feel connected to his father’s roots. The doll wears a blue tunic suit and a beautiful white turban, so that his son can practice tying the fabric. The doll’s face is complete with the father’s smile.

It is important to note that the dolls are not just for children. I arrived at Nailah through a friend who had commissioned dolls for her Arts degree final piece: she wrote five failed love stories, told from experience. Her male lovers are the exaggerated protagonists; there are truths and there are twisted realities. It’s up to the reader to decide what to believe, as you only get to hear one side of the story. These stories have been woven and the characters have materialised in a form my friend can now hold in her hands with total control; they have been sewn into dolls to display on the gallery wall beneath the tales (one in fact, does have a tail.) She was flabbergasted as she held her dolls, with their likeness and the significance, in her hands. There was a history behind each of the characters, which she could now touch, in the fabrics of their waistcoats, their beards, painted in the colour of their eyes.

Another client, a Catholic woman from Bogotá, asked the Nailah ladies to make her a set of seven angels. She also requested two special angels. One is a mini representation of her, the other is her dream man, both in angel form. The two dolls sleep with her in her bed at night so that hopefully one day her dreams, channelled through the homunculus angels, will manifest themselves into reality.

Leila has also created sets of icon dolls, in the styles of powerful iconic women such as Frida Kahlo and Erykah Badu. They are beautiful, inspirational and the most sought-after dolls. For a new client who’s child is studying influential women in history, Leila is designing a doll which comes with a range of outfits, to represent each of them and bring their histories to life. 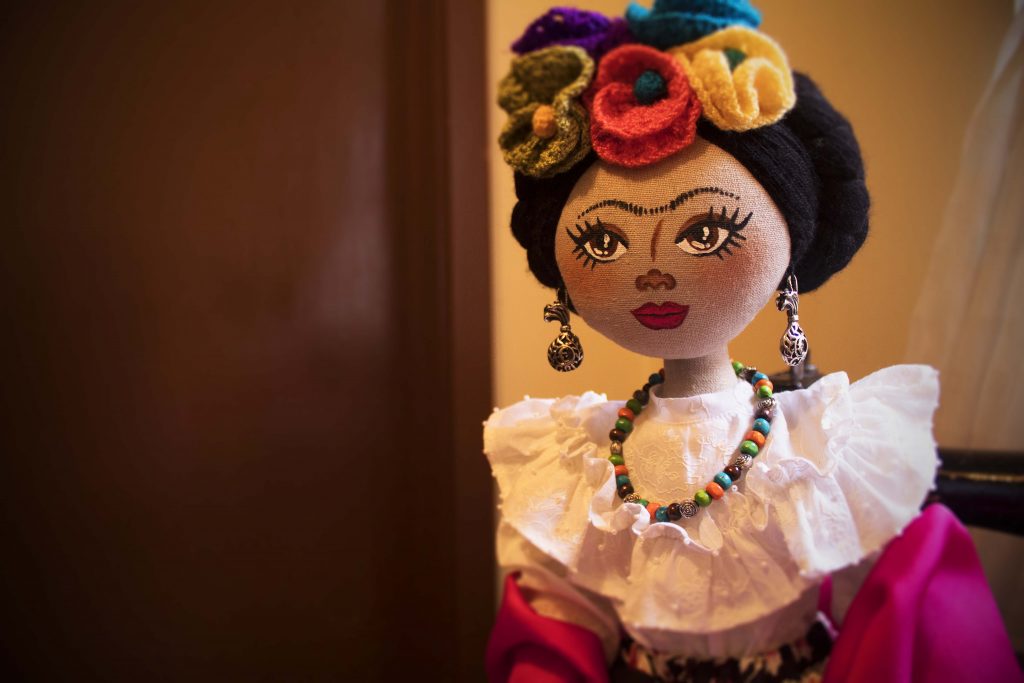 Nailah make dolls to order and ship around the world. You can find them on Facebook here and contact them to discuss your special order.

All photos by Marcela Han Acero