In Noche Antigua (Ancient Night), Álvarez illustrates a Mesoamerican myth explaining the phases of the moon. Each night a dutiful rabbit fills the moon with glowing pulque, a fermented pre-hispanic drink, to make the moon full. The rabbit is followed by a pesky opossum who filches the pulque for himself and greedily gulps it down, leaving a waning moon. Finally the opossum drains the moon entirely, casting the world in shadow. Shouldering the sun on its back, the opossum pushes it to the forefront of the sky, whilst the rabbit gathers more pulque to eventually restore the moon. The book ends with the rabbit and the opossum raising their glasses to this playful ritual, respectfully enjoying a cup of pulque together.

For Álvarez, the most interesting part of Mesoamerican cultures is their masterful use of metaphor in art, language and oral narration. He explains: “Nowadays it is usually interpreted that they genuinely believed that, but I think that there is nothing naive about that thought, they knew very well what they were doing and they were certain they were using figurative language.” To demonstrate the intentional use of metaphor in Mesoamerican cultures, Álvarez quotes a small fragment of the oral tradition of the Huichol people of Jalisco, descendants of the Aztecs:

“The moon emerged from her house of water to illuminate the sky.

She wanted to scatter her white moonbeams in the heavens, and defecated.

The brilliant stones of her faeces spread over the blackness.”

The metaphorical language Mesoamerican cultures used to explain the world around us is memorable and creative: the earth takes the vibrant form of a giant lizard, the stars are eyes shining in the sky or a luminous constellation of excrement. 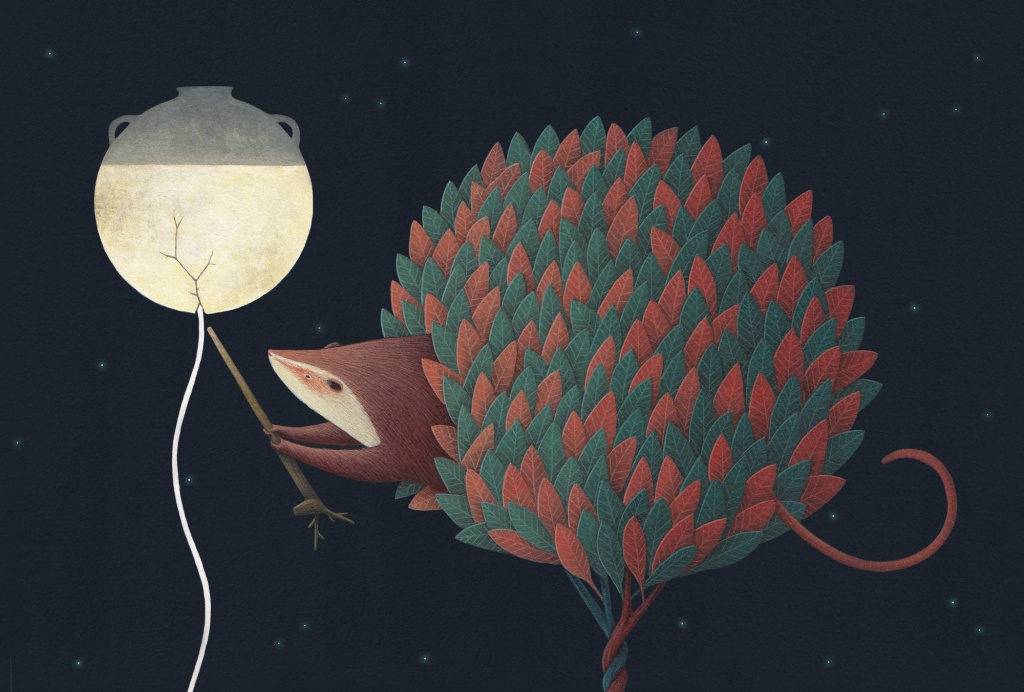 Bandada (Flock), a book Álvarez co-wrote and illustrated with María Julia Díaz Garrido, uses anthropomorphic drawings of birds to illustrate the progression of humanity. Initially, the birds seek knowledge, scientific and technological progress and comfortable living, shown by waistcoated owls explaining a model of the solar system to young chicks, and roosters grandly outfitted in fashionable ballgowns. However, this process of development generates violence, creates a hierarchy and makes the birds forget their own nature as they ironically construct hot air balloons, leaving their wings in disuse. The birds are drawn in graphite, beautifully shaded in black and white like images of early explorers. 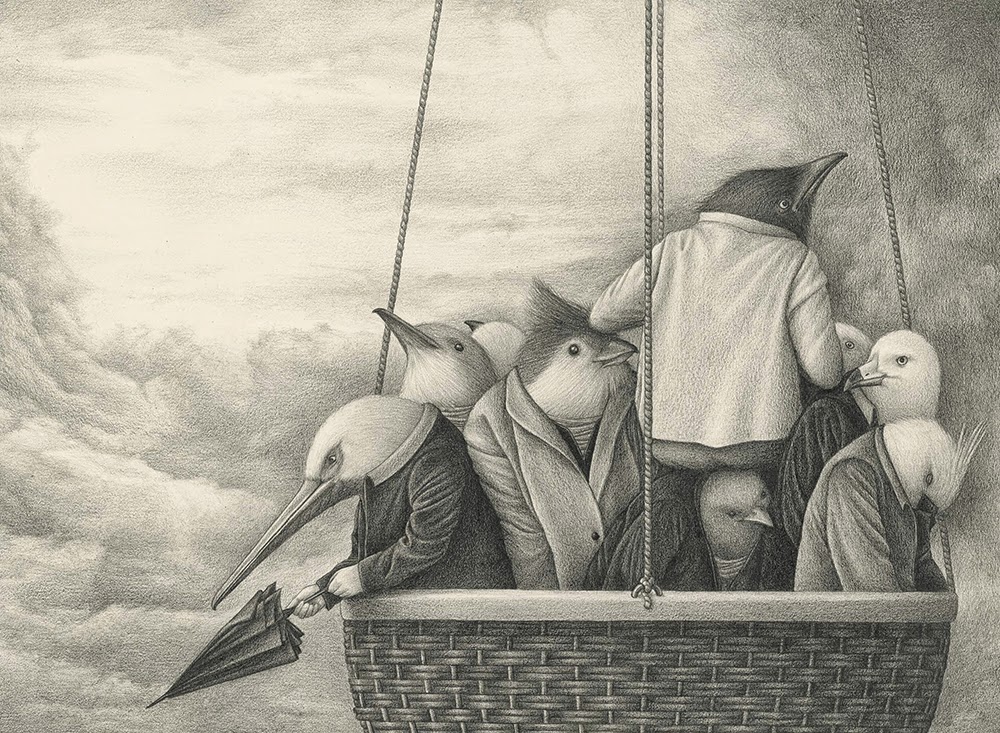 Álvarez’s most recent work comprises anthropomorphic images of the night imagined as a sloth-like man, drawn slumped atop a rock or delicately playing with birds with his shadowy fingers, his head resting softly on a tree while the stars and the moon glitter from his belly. The night is downy and soft, his blurred graphite edges fading into the page like the delicate boundary between being asleep and awake, as he keeps vigil over the darkness.

David: I started drawing because one of my aunts did it. I was around 7 years old and she was 18. From that moment on drawing became a part of my life.

Helen: What is your creative process like? What kind of atmosphere do you like to have when you are working?

David: My creative process is painful, exhausting and frustrating. If I could I would skip it. The only satisfaction or joy comes when the drawing is finished. If it conceptually, technically or graphically approaches what I wanted to achieve then I’m happy.

Helen: What do you like about hand-drawing your illustrations with graphite? Do you prefer working in black and white?

David: I like it because it’s a very personal experience, it’s about discovering the qualities of the paper, the material and mastering it to achieve what you want. The paper records the pulse, the pressure, there are no shortcuts, there are mistakes, you have to learn from them and you have to exercise them. I like black and white because I feel very comfortable working with lights and shadows. 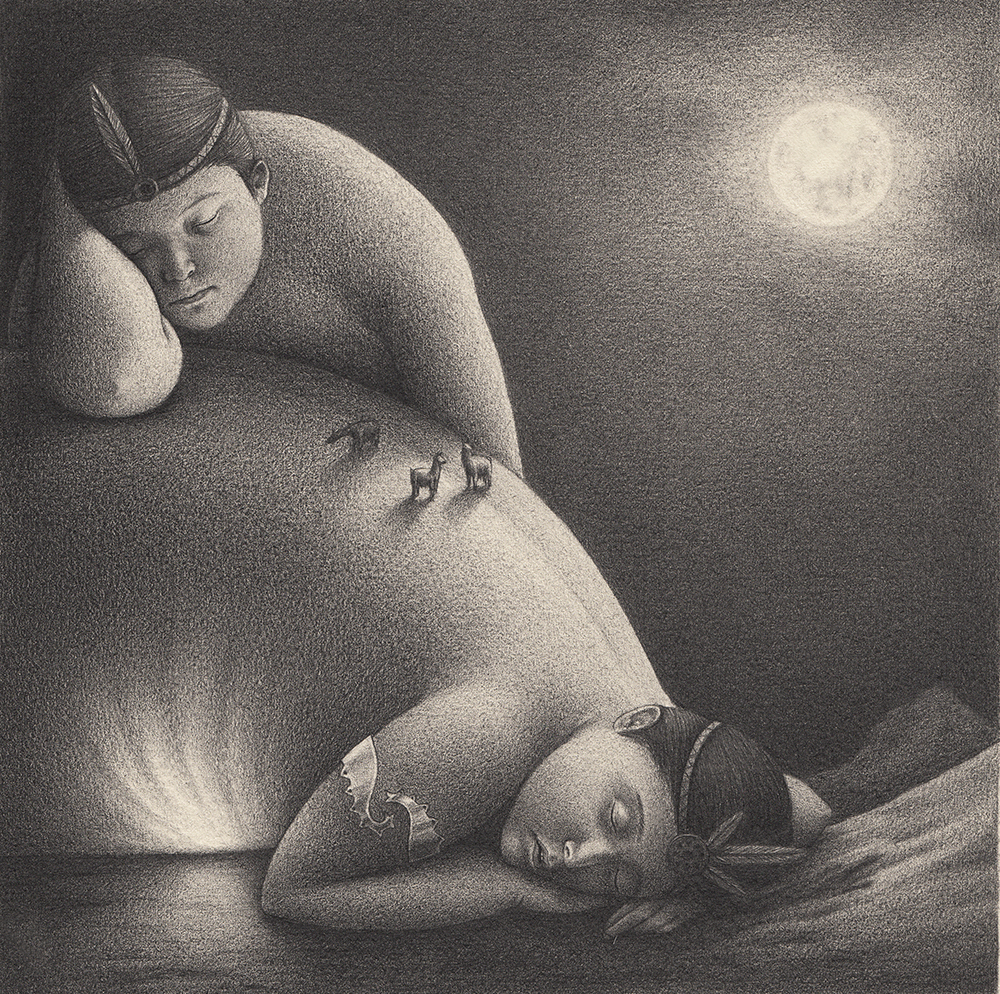 Helen: What other illustrators or artists are you inspired by?

Helen: What about illustrating fairy tales and folk tales interests you?

David: That they tell macabre things, and they are a great reflection of humanity.

Helen: The book you illustrated, ‘Bandada’, deals with dark themes such as the moral demise of mankind. Do you think it is important to introduce difficult topics such as these to children?

David: ‘Bandada’ is the book I made with Julia Díaz, we never thought it was for children, nor for adults. We just did it thinking about the issues that were important to us and everything flowed. If a book has a clear story and is well done, no matter what age you are, you can understand it.

Helen: In ‘El pozo de los ratones’, you illustrated Mexican oral folk tales. Were you familiar with many of these stories beforehand? What did you enjoy about illustrating them?

David: I was not very familiar with those stories, although some stories that my grandfather told me about witches, the evils they did and how to make amulets to keep them away were very important in my childhood. What I liked most was that the characters represented the worst feelings of humanity: evil, hatred, ambition, envy.

Helen: The moon features a lot in your work. Is the moon a symbol that inspires you?

David: Not really, it has been a coincidence that it appears constantly in my drawings. I find it interesting because it is in the stories, art and imagination of humanity. 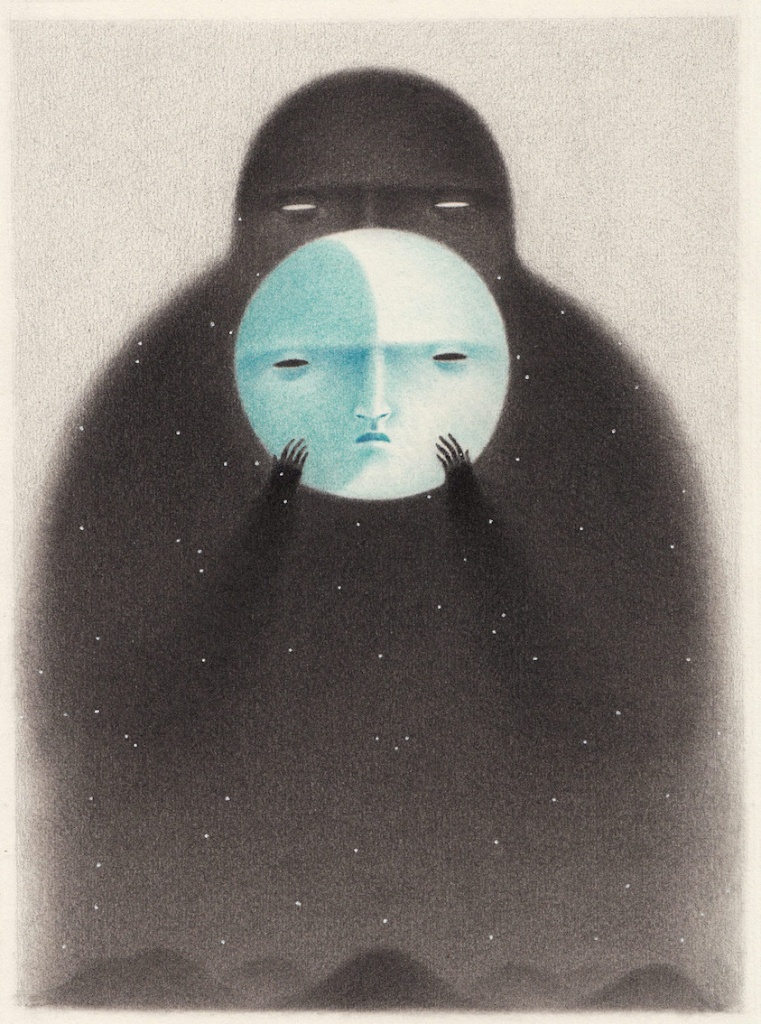 Helen: Animals feature a lot in your work. How do you choose which animals you want to draw and write stories about?

David: Animals also appear by chance, I use them when they are important to the story, and they have a meaning that the reader knows how to interpret. I think that is the reason, that they are loaded with meaning and it is easier to make them represent something since they are universal.

Helen: In lots of your work, animals and the nighttime appear in a humanlike form. What about using anthropomorphic imagery interests you?

David: I like the night because it is related to the unknown and produces fears. In this case I tried to do the opposite, represent a night that did not cause fear. The character is very calm, patient and carefree. Although it is huge, it is very delicate. 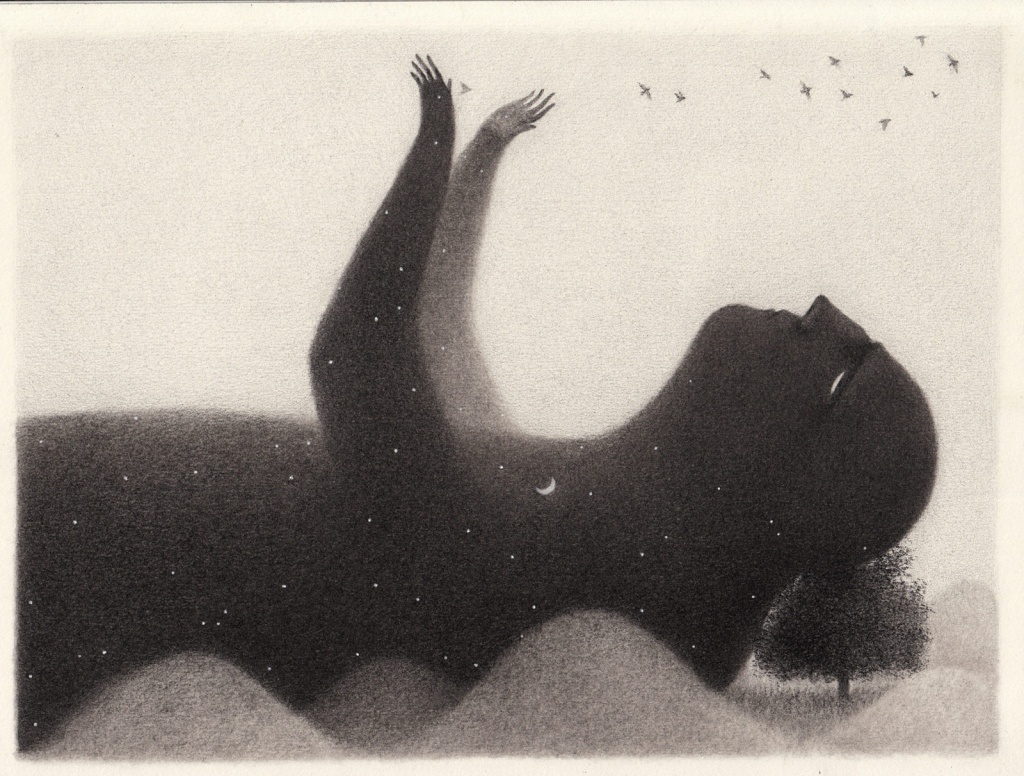 Helen: Where did you get the idea for your new work, “I dreamed I was the night?” Do your dreams ever inspire your illustrations?

David: I almost never remember my dreams and when I remember them they are not interesting. The idea came when I started working on a book called Noche Antigua. I made many sketches and from there two paths emerged: one was the book, Noche Antigua, and the other was this series of drawings about the night.

To see more of David Álvarez’s work, visit his website, or buy Bandada and Noche Antigua on Amazon.