Written by BristoLatino
Posted on June 25, 2016

Following on from Flora Hastings‘ focus piece on the miners of Potosí, originally written for UCLU Amnesty International journal, here you can read more about the mining families of Cerro Rico.

A cloaked Incan stands at the base of the carmine-coloured mountain, talking to a hatted Spaniard. The Virgin Mary’s disembodied hands frame the conic mountain, her head floating before the summit. Gold streaks suggest the divine sanctioning of the Spanish colonisation of Potosí’s Cerro Rico in the 17th century, when the ‘Virgin Mountain’ was painted by an anonymous artist. The oil paint is cracked, it is four centuries old. Today, the West’s intervention within Cerro Rico is of a mixed variety, materialising in charities as well as in exploitative foreign mining corporations.

‘How do they know about us?’ Julio asks when explaining why he does not work for one of the European charities in Potosí. Julio Zambrana began asking these questions at the age of 20. Now an activist for miner’s rights and running an ethical tour company, he saved his wages from mining and studied history and tourism. ‘I used to sleep 3 hours, wake up at 7 and go straight to university’. He has been a passionate advocate of education since, using himself as an example to other miners who struggle to leave the mountain. Julio wants to provide the children of miners with the vocabulary to question and re-mould this intervention.

For the Cruz family, the question of education is fraught. Like many parents within the mining quarter of Potosí, the Cruz’s desire for their children to complete their education comes from a knowledge of the growing fatalities of mining life. The mountain collapses, mining equipment for co-operatives remains antiquated, Morales does not heed the calls for a growth in public infrastructure in Potosí. Education can offer a permanent vein leading out of the mountain – Julio’s foundation will provide the dynamite.

From the concrete terrace of the family’s two-room home in Potosí’s mining quarter, the city centre feels far away. The Northern Bolivian Quechua overtakes Castillian at this altitude. The Old Town of Potosí’s centre is not exposed to the dry winds blowing in from the Andes; busy with tourists hundreds of metres below. Windburned marks on cheeks are signs of those living on the margins of Potosí’s social consciousness, 4,700 m above sea level.

Julio used to mine with Guillermo Cruz, Martina’s husband. Living within the city center, Julio has forged documents proving that Roberto Cruz, Guillermo’s son, works at his office, allowing three of his daughters to attend the prestigious Colegio Santa Rosa in the city centre. Guillermo’s daughters are a rare exception. Topography is political in Potosí; catchment areas determine your future.

The print of a Bugs Bunny jumper is distorted, stretched over 15 year old Daisy’s heavily pregnant belly. She is the girlfriend of Chacho Cruz, Guillermo’s son. Above ground, there is no El Tio, the protectorate of the mines, to guard over the women and girls that grow up in mining communities. The drop-out rate within primary and secondary education is the highest for girls; sexual abuse, teenage pregnancy and a lack of encouragement leave many woman dependent on their partners for a living. For miners of co-operatives with no state wage or pension, their early deaths through blood poisoning leave their families stranded in the informal sector, often scraping a living through street vending.

‘Chacho is the youngest, 17 years old’, Julio exclaims before ascending the mountain to their home, ‘his brothers and father never wanted him to work in the mines’. He re-enacts the dialogue between Chacho and his father Guillermo, after Chacho’s then fifteen year old girlfriend, Daisy, became pregnant:

‘With you, Papa how old were you when you married our mother’

His mother Martina switches from Quechuan to Spanish as she tells us that Chacho has decided to leave high school, marry Daisy and become a miner like his two older brothers. 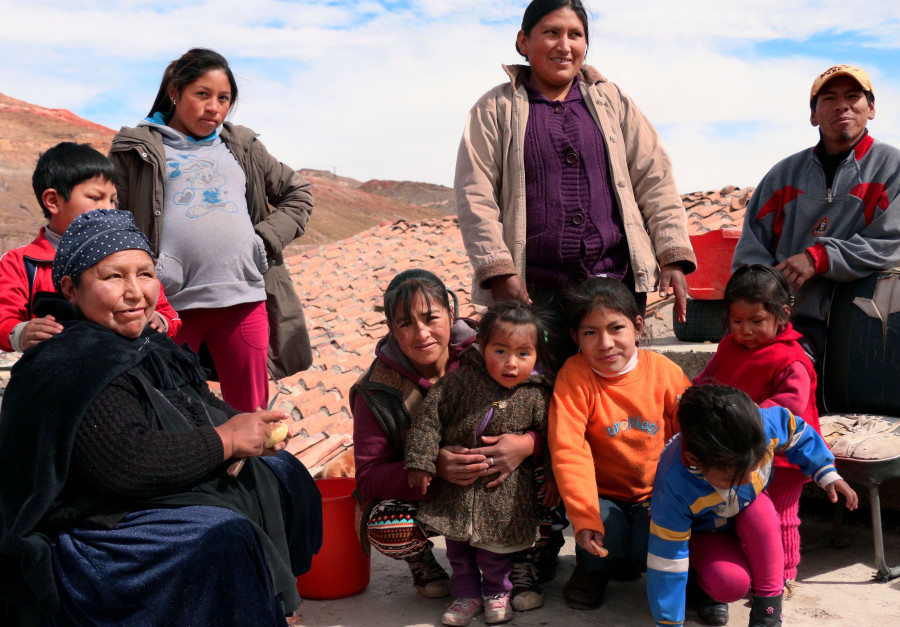 Education: a weapon against the lack of systematic change in Potosí

Julio is angry, his curses ricochet between Quechuan, Aymara, Spanish and English. His hands point in many directions when he speaks; at the invisible figures that run Potosí, the owners of refineries, the over-worked teachers, the government officials. He jolts from the seat of his dim office, body erect, finding it hard to sit down when talking about the lack of government intervention.

He’s angry at the postcards he sells in Sucre to raise money for miners that do not cover the cost of his bus ticket and accommodation. The laws he paid to get reconstituted to prevent tourists from exploding dynamite in the mines in 2008 and legally oblige tour companies to pledge 15% of their profits to the miners in 2011. He’s angry that basic educational items demanded by the miners in 2014 have not been granted by Morales’ government. State funded schools in Potosí’s lowest-income areas remain understaffed, under-attended and understocked. But Cerro Rico’s mouth will not close in the near future and signs of public infrastructure seem to remain within the torn protest posters of miners.

Education provides an escape from the poor working conditions of the mines, current and future. Chacho’s life-span within the mountain is as perilous as the foundations of the mines themselves. Through the re-privatisation of Cerro Rico in 1985, transnational companies such as Coeur Mining Inc have managed to retain their mining operations within the treacherous top levels of the mountain.

Julio’s new foundation, Nuevo Amanecer Para Los Niños* wants to push through these unideal circumstances. A steel-grated window is swallowed into a dense cave. A glinting drill extends like a welded sword, the tearing sound of stone against metal is imagined. Gaunt cheeks hover above an advert selling beer made of Quinoa. The paint is not cracked. The muriel Julio commissioned a local artist to embellish the front of his office with works as the visual prologue to the conditions he wants to see changed. The image offers a more realistic portrait of Cerro Rico than ‘The Virgin Mountain’ – painted from the inside, like Nuevo Amanecer Para Los Niños. 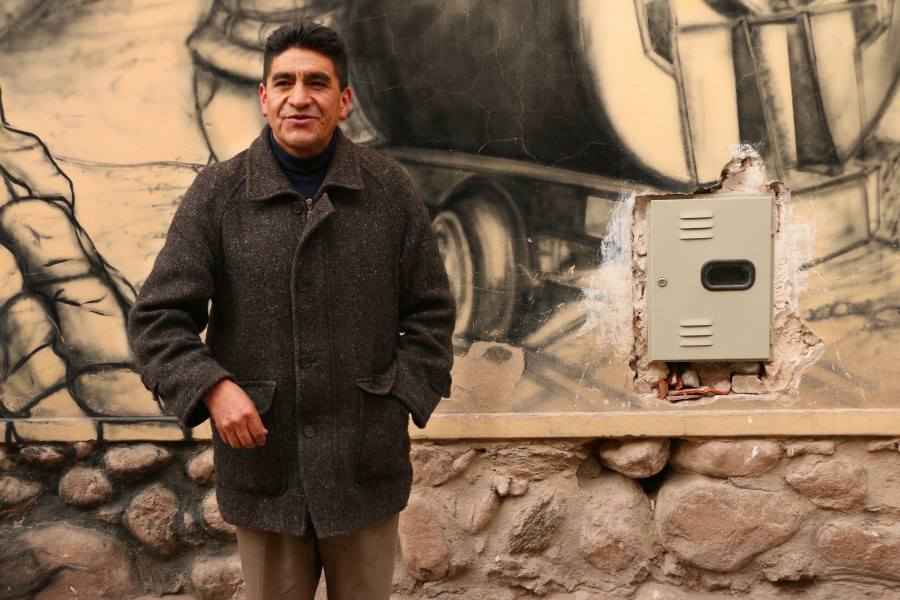 Julio in front of the muriel which covers the foundation office.
-Flora Hastings

* ‘New Dawn for the Children’- Beginning with the 250 families of his co-operative, Julio wishes to expand the aid of his foundation to the children of the 22,000 workers on the mountain. His foundation will begin by supplying basic materials that state schools in the mining quarter often fall short of, and miner’s can not afford to purchase; text books, pens, pencils.

His foundation’s long term goal is to facilitate and support the career paths of young adults that have graduated or are enrolled within high school, such as their running a hostel set up by Julio and working in his cafe next to his office. The jobs Julio could offer would provide a bridge to the intercity economy of Potosi, or of the changing landscape of Bolivia, and transform the stigma that sees higher education as a preserve of Potosi’s middle class.