Written by Hermione Greenhalgh
Posted on May 11, 2017

In a TED talk by the mayor of Bogota, Enrique Peñalosa, he states that mobility is a matter of equity and equality[i]. In order for “democratic equality” to exist, a government must deliver low-cost, high-frequency public transport that gives its users a proportionate right to road space.

The choice to increase tariffs by another 200 pesos for the Transmilenio (Bogotá’s main bus network) and by 300 pesos for SITP buses (part of the integrated public transport system) exemplifies, to use Peñalosa´s own phrase, “insufficient democracy”.

The wrong people are picking up the bill: fare increases are neither market efficient, nor fair. Despite the fair raise last year, the quality of service has not proportionately improved. A report shows that in the same year 62% of people think their commute has taken longer[ii]. In fact, a study by Moovit revealed that bogotanos spend more time on daily public transit than people in any other city in the world (on average 97 minutes commuting to work)[iii]. Many people have to walk miles to their nearest Transmilenio stop, and robberies and sexual harassment on buses are frequent. [iv] [v]

The transport deficit is a serious problem, but if the whole system is to avoid collapse it needs a more sustainable source of funding. Increasing bus tariffs is ultimately a self-defeating exercise, and so the government must look elsewhere.

While my intention is not to vilify car-users, if we are talking about “democratic equality”, drivers should cover some of the social costs they generate for others. For example, regulating road parking, rental car tax, weight-based vehicles sales tax or increasing the surcharge on gasoline are fairer and more sustainable ways of subsidizing the public transport system.

The newly introduced “pico y placa”, which works by alternating between restricting number plates ending in an odd or even number each day, has worked in reducing congestion, but must be implemented alongside another scheme to generate sufficient funds. One problem with this approach is that wealthier Colombians who own two or more cars are essentially exempt from the restriction; able to switch car according to the day. A blanket congestion charge in the busiest parts of the city may be fairer and more effective.

More private vehicle taxation would not only bolster the transit infrastructure, but also make life cleaner, safer and less congested for pedestrians, cyclists and the general public. And, given that Bogota´s air quality is considerably more polluted than the level advised by the World Health Organization, it is as much an environmental concern as a social one.[vi]

Equally, Peñalosa must renegotiate contracts with private operators which currently guarantee them exaggerated profitability.[vii] A study in carried out by investment bank Valora Fianzas revealed that since 2013 operating costs for Transmilenio are inflated.[viii] Private operators receive significantly more than the costs incurred by fuel and tyres.

In the run-up to the tariff increase on 1st April, mass protests took place across Bogota. Hundreds of citizens took to the streets to demand better service, causing blockages and station closes throughout the city.

If buses do represent democracy, Bogota´s failing public transport system is the perfect incarnation of a dysfunctional political establishment. Peñalosa must be more fiscally hawkish to achieve his transport utopia, taxing those who undermine it rather than shortchanging those who are integral to its realisation. 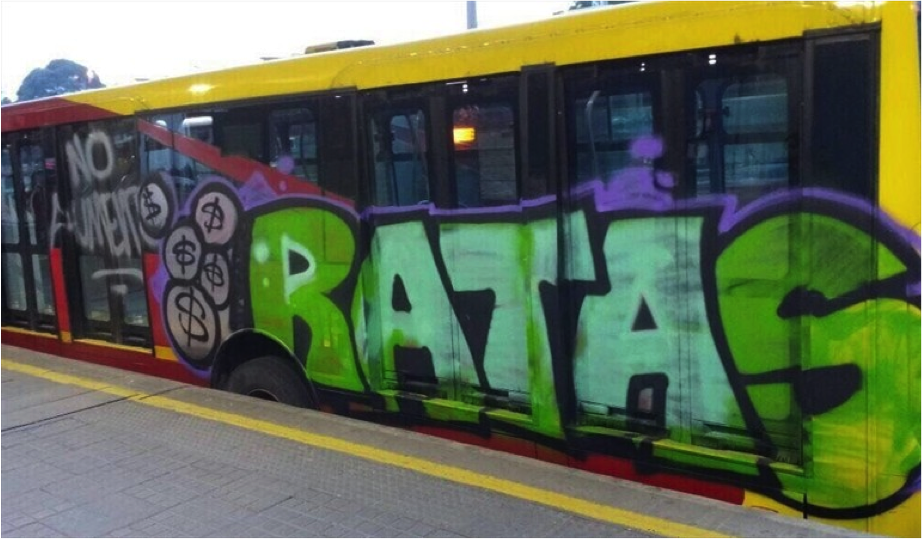 In protest to the fare rise a Transmilenio bus painted with the message “No to the rise….theives” 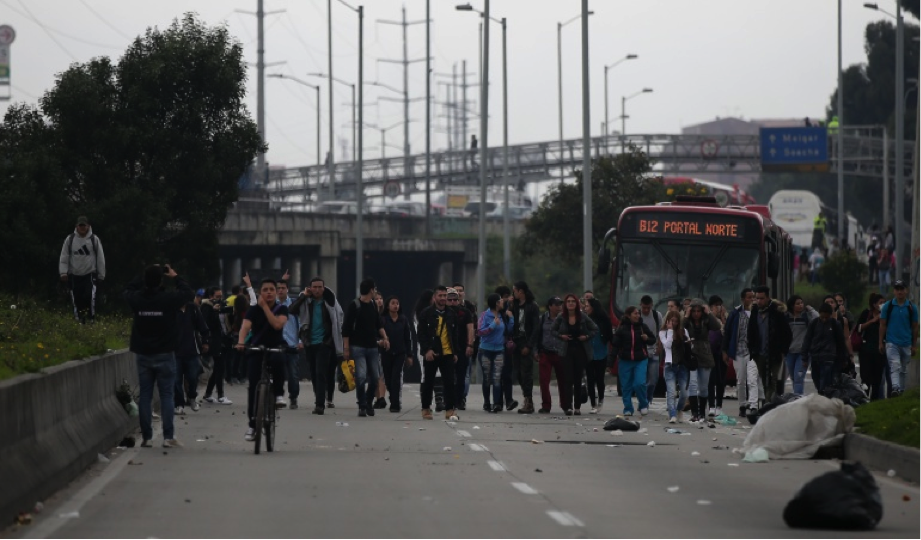 Protestors cause blockages by walking in the bus lanes