Written by BristoLatino
Posted on April 6, 2018

Following Una Mujer Fantástica‘s win at the Oscars this March, Manon Kidney takes a closer look at what makes the film a powerful and memorable experience.

Una Mujer Fantástica is a fantastic projection of female strength and resilience in the face of adversity. From the first frame – an epic aerial view of the Iguazu Falls in Argentina, silently crashing to the sound of soft strings, this film sends one into a dream-like state. There is an ethereal quality that somehow does not detract from the moments of impact, as we trace how the protagonist, Marina (Daniela Vega), fights for her right to exist and to mourn her lover.

Director Sebastián Lelio sets up a tone of ambiguity from the beginning. An older man comes to watch Marina singing in a club, we sense that there is a connection between them, but the age gap leaves us guessing. Over a romantic birthday diner, it unfolds that they are in a happy relationship, one that will come to be scrutinised and picked apart by prejudiced outsiders. Her boyfriend Orlando (Francisco Reyes) wakes up in the night, suffering from an unknown cause, leaving a panicked Marina to prepare to drive him to the hospital. In his state of delirium, he falls down the stairs, fatally worsening his condition and leaving him with suspicious bruises into which the police read suggestions of foul play. 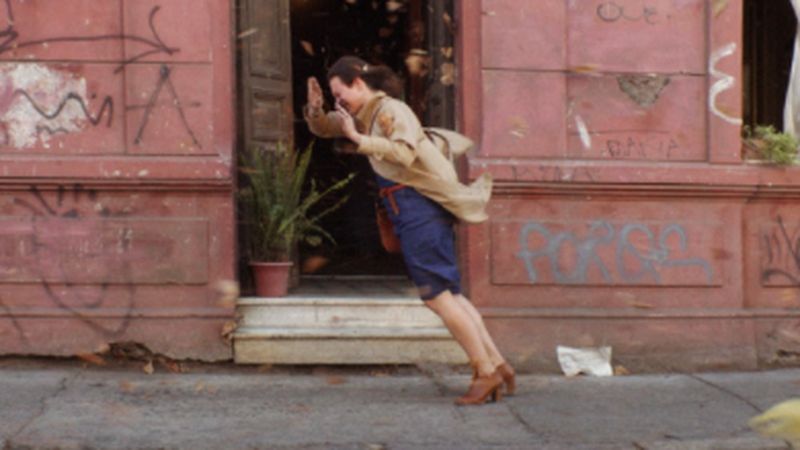 Accused, lost, and shadowed by prejudice, Marina is forced to confront Orlando’s ex-wife and son who wear their contempt with pride. Rules are imposed and her relationship is disregarded, she is banned from the funeral and warned that she must leave her flat. But her nightmare culminates in two surprise attacks along the course of the film. One is conducted by officials who insist that she must report for a medical examination that evolves into a gross invasion of privacy, hinting that there might be some ulterior motive behind the operation. This scene reminds us of the power dynamics deep-rooted in our society, and shows how small vulnerable people can be made to feel when that power is abused. The second humiliation is as excruciatingly uncomfortable but more explicit, as Marina is bundled into a car by Orlando’s family members and attacked with sellotape. These violations are totally perverse, but her defiance is resolute; although her refusal to quietly comply can, at times, make you squirm as you anticipate the brutal retaliation, above all she is an inspiring figure due to her resilience.

I was told that there was one particular moment in this film that I would not want to miss, and that moment arrived in the form in a club scene. When you sense Marina’s need to escape, the film smoothly transitions into her inner dream world, briefly breaking away from the realism of the rest of the film. Adorned in gold and silver tinsel and backed up by dancers, it is a moment of sheer empowerment and beauty that climaxes when she flies towards the screen, holding your gaze.

I have purposefully omitted one key detail from this brief review, but I went into this film blind and I feel that I benefited because of it. If the theme of intolerance is the hint, can you guess which marginalised group Marina represents? Maybe you already know. Either way, Daniela Vega’s compelling performance makes Una Mujer Fantástica a must-see, evoking searing empathy for a fantastic woman who has lost her loved one.