Hailed as a return to his Gothic cinematic roots, Guillermo del Toro’s The Shape of Water has already started to garner acclaim on both sides of the Atlantic. Bristolatino’s Helen Brown takes us through a closer look at the allegorical meanings hidden in the film.

Guillermo del Toro’s new film The Shape of Water features an amphibian humanoid creature (Doug Jones) from the Amazon who is brought to the USA in the midst of the Cold War and kept in a tank at a government research facility, where he is tortured and tested on in order to further America’s race to the moon. The creature was discovered by Colonel Strickland (Michael Shannon), who embodies the stereotypical, almost caricatured view of 1960s America: he drives a Cadillac, lives in the suburbs with his wife and two kids, and has silent, joyless missionary sex. Strickland is the primary enemy of the sympathetic monster, who cowers from his relentless beatings with a cattle prod. The heroine of the film is mute Elisa (Sally Hawkins), who works as a cleaner in the facility, and treats the monster with kindness, in contrast to Strickland’s brutality. She feeds him boiled eggs, plays him records, and eventually rescues him from Strickland’s grip. Her partners in crime are her two friends: her homosexual neighbour Giles (Richard Jenkins) and her black coworker Zelda (Octavia Spencer), both of whom take pity on the monster out of an empathy shared by the downtrodden. Del Toro uses the Beauty and the Beast trope but demands no transformation of the monster; instead, the monster is used to forge an alliance with other oppressed groups who find themselves on the fringes of the American society.

Del Toro has dubbed his latest film a “fairy tale for troubled times”. Fairy tales are the least innocent of genres. Fashioned from folk tales into pedagogical stories to civilise upper class children in the 16th and 17th century, fairy tales have always reflected and preserved the values of their time period. The fairy tales we are familiar with feel deservedly outdated because they echo the morals of their time, promoting antiquated views on the roles of men and women. In creating a modern fairy tale with The Shape of Water, it is worth asking which values del Toro is promoting and which he is critiquing in our present society.

Importantly, the movie pits conventional society against society’s outcasts. In an interview with Gold Derby, del Toro explained that he chose 1962 because “it’s a very important period in which America in many ways started defining its myth. You’re coming out of World War II, there’s a huge abundance, the wealth and suburban wealth, you have a car in every garage, TV…the space race, Kennedy’s in the White House and there is this myth of greatness”. Del Toro sees this as an “idealistic fairy tale time” in the history of America itself. The outcasts of this society are Elisa, her friends and the monster. Giles is violently rebuffed when he tries to flirt with a man, and the villain Strickland is openly racist to Zelda, referring to African-Americans as “your people”. The monster was discovered in South America, where the locals believed him to be a god, which Strickland ridicules as primitive behaviour. However, he underestimates the ability of lowly cleaners Elisa and Zelda to perform a heist to free the monster, and underestimates the monster itself, who possesses supernatural powers. Del Toro critiques the intolerant American identity that excludes and disdains those who do not conform to their idea of greatness, whether through culture, skin colour, sexual orientation or disability. Each strand of Del Toro’s film boasts its own aesthetic, from Strickland’s sleek pastel pop culture world to Elisa’s old glamour beauty of noir films and glitzy musical daydreams. Transcending it all is the surrealist stream of water, the art of the monster’s fairy-tale world that dances across windowpanes and cascades into submerged bedrooms. 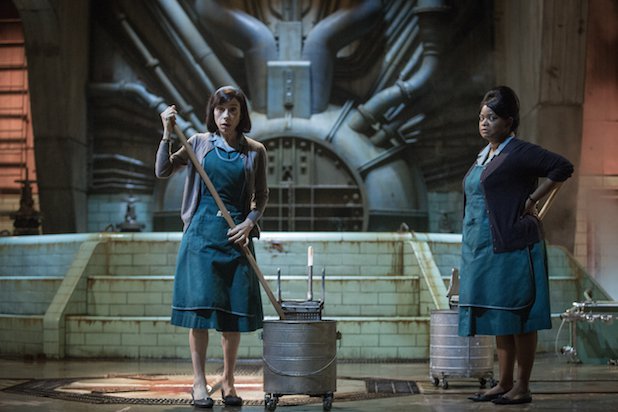 In The Power of Myth, del Toro’s director’s commentary on his previous film, Pan’s Labyrinth, he traces the history of fairy tales, which he sees as tales originally used by early man to describe the natural occurrences around him, like the sun setting or the moon rising. They progressed into becoming tales which express the enigmas inside ourselves. When the outside world was no longer a mystery and we developed a social structure, we turned towards “all those impulses that we were repressing…you know, the sex drive, the need to hunt, the need to kill, these things became personified in monsters”. Del Toro masterfully refuses to disguise this use of monsters as a tool to explain man’s dark side, and instead presents man as the unequivocal monster. Strickland is the epitome of a toxic masculinity: he is military-trained, takes perverse joy in torturing the creature with a cattle prod, shouts and bullies, eroticises Elisa’s muteness and sexually harasses her at work. In traditional fairy tales monsters exist as a symbol of something we need to understand and confront in human nature. Here, del Toro unmasks the monster, and plainly presents the negative aspects of humanity: brutality and prejudice.

While del Toro renovates the genre of fairy tales, equating monsters with men, he also unearths the darker elements of fairy tales, omitted by Disney: violence and sex. Del Toro’s film involves torment and cruelty, which is befitting of the genre. In del Toro’s Guardian article he explains how “all fairy tales have a grim setting. Hansel and Gretel is essentially about a famished family who send their children to the woods to die. Cinderella is about a child being tortured…fairy tales pit harsh circumstances against a fantasy world”. The love story that unfurls between Elisa and the monster, and the sensual aquatic scenes that ensue, are not new either. Giambattista Basile’s original version of Sleeping Beauty involved the awakening of the damsel not with a kiss but with a rape, and the Brothers Grimms’ wolf invites Little Red Riding Hood coquettishly into bed before devouring her. However, these morals were intended to promote passivity as a feature of sexual maturity, and fearfulness of the act itself, attributes promoted as desirable by the society of the time. In contrast, del Toro’s contemporary Elisa has a healthy sexual appetite and relishes her tender underwater adventures.

Del Toro aimed to make an emotional movie, as a “healing tonic for the scepticism and the rage that I think we have socially, and the way we look at each other with suspicion”. In our irate social media age, del Toro felt that the fairy-tale format would help erode the defensive barriers between different viewpoints, and allow people to “accept the discussion no matter what persuasion politically they are”. The problems he tackles are not outdated, and by using an ancient format he eases his audience into thinking about what values we want to embrace, and which we want to exclude, in our modern society.