BristoLatino Editor-in-Chief Rebecca Wilson discusses Lido Pimienta’s music, and the harsh backlash against her following an incident at a Halifax show in October. 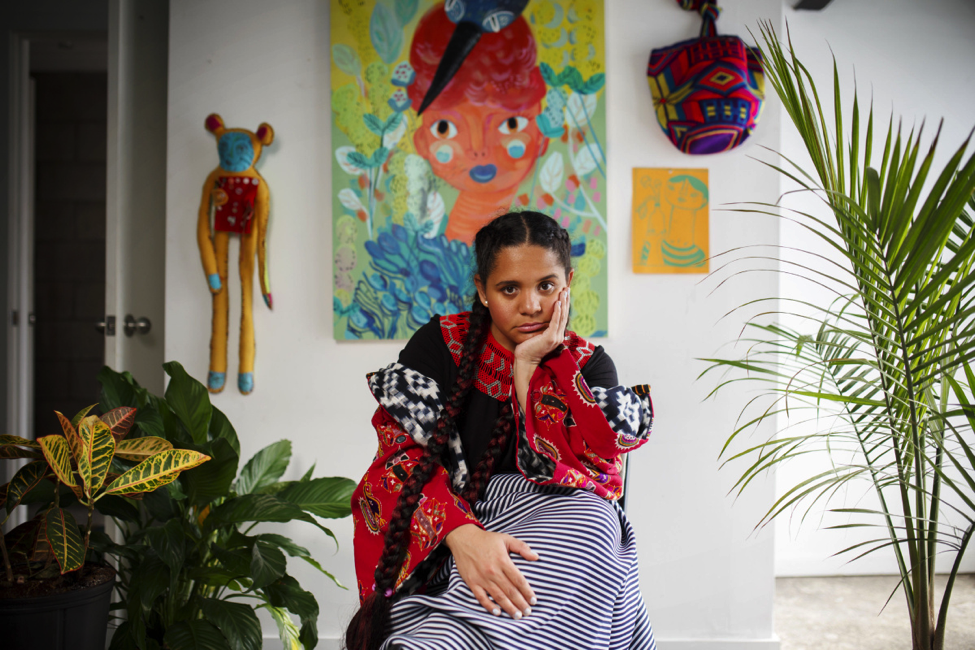 In September this year, BristoLatino favourite Lido Pimienta won Canada’s most important music award, the Polaris Prize. The Colombian artist’s influences come not only from Afro-Colombian rhythms and melodies, but from the Wayuu indigenous music which she has sung with her mother’s family from a young age. Having moved to Canada at 15, Lido has experienced a torn identity, discrimination, and even abuse. She has found her place, her voice, her style and a knack for selling Spanish-language music in a male-dominated western music industry (which she dubs a “hot mess”).

Her voice is childlike and fresh, lyrics come to her in Spanish and lyrical phrases tend to repeat themselves in powerful chant-like repetitions that echo her Wayuu heritage. Her first musical pursuit, at 11 years old, was a metal band in which she and her (older) friends sung out against the then Colombian president, Andrés Pastrana Arango. Receiving the highly-regarded Polaris music award this year, she gave thanks: to her 9-year-old son; to the “real people of Canada” for having her on their soil; and to her mother for enduring years of white supremacy in Canada. She also called out to that “white specimen” who told her to go back to her country when she arrived on Canadian soil. No short of controversial, Lido Pimienta is making waves not just for her musical content, but for her whole philosophy.

Her award winning album, La Papessa, plays with the patriarchal Catholic ideology as she takes on the role of Pope, a leader of her own tribe, perhaps. The album features collaborations with Colombia’s iconic Andrea Echeverri of Aterciopelados, First Nation electronic music group, A Tribe Called Red and Anishinaabe musician, Melody McKiver. Lido sings about the many faces of love and particularly, the personal strength which comes from vulnerability.

The track La capacidad begins by clearly stating, “You are able” (“tú, tú tienes la capacidad”). She goes on to sing:

“Yo no naci para cocinarte

Yo no naci para hijos darte

“I wasn’t born to cook for you

I wasn’t born to bear your children

The song is composed of different parts; it is a vibrant, fresh celebration of feminine power, which could be an anthem for anyone who has been repressed or belittled. Yet, Lido is being accused of racism, narcissism, of victimising herself and using her intersectionality as a way of winning a pity vote to success. To a certain extent all solo musicians, let alone humans are narcissists, no? What these ‘haters’ are perhaps missing it that this ‘yo’ is a collective of women, coloured women, subjected women in all spaces. It need not only apply to women, but could equally touch men who have been in a similar position, or anyone who has dominated and abused as well as the inverse. It is an inclusive ‘yo’. In the song ‘Humano’ from her earlier album ‘Color’, she sings,

Exclusive? I don’t think so. Christina Aguilera’s “I am beautiful in every single way” was not misread as megalomania, but is this because she so frequently offered us her body and advocated for capitalist giants such as Disney?

The set of the music video is an arts and crafts workshop where women are not sexualised nor soft and smiling, but are sharing seriously, creatively and fearlessly, in order to heal. Props include a make-up brush which Lido drags over her neck to a voiceover explaining how an ex-lover grabbed her exactly there, and a plastic hand which sits on the table with (male) catholic saint figurines attached to each finger.

Lido speaks out about domestic violence against herself and others, creatively confronting a female inferiority complex. She empowers, she shares the stage with other females (in this video, with fellow musicians including the Colombian Ela Minus). She tells her story, encouraging others to share and connect with themselves in order to overcome adversity alongside others. The song ends with a harmony in duet (with no less than a white girl!) singing an old, now ridiculed narrative “you are the man, I am just a stupid woman”.

Her YouTube videos have recently been littered with violent, threatening and ignorant comments mostly accusing her of racism: 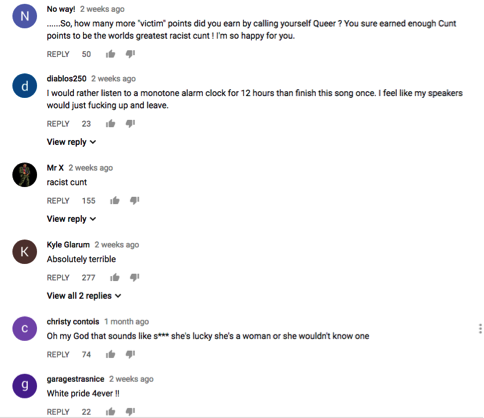 They continue on each video, with incessant use of the “c word” but achieving very little in the face of the music she makes. The backlash is shocking. As she spells out in an interview with CBC presenter, Ian Hanomansing,

“Reverse racism does not exist […] I don’t have the systemic power to segregate anybody. I don’t have the institutional power to be racist against a people that hold 99.9 [percent of] power in the world. We do not live in a post-racial society […] If racism was a thing of the past, I would have no need to highlight any of the discrepancies and inequities.”

Lido has received death threats, instructional videos on how to kill herself and ‘fat-shaming’ remarks following an incident at a show in Halifax in October where a (white) photographer refused to move back in the crowd to let women of colour in front of her. She accused Lido Pimienta of ‘reverse racism’. The artist cleared up the scandal which dominated headlines, writing on her Facebook page, “It had nothing to do with her skin colour, but because she brought violence to my show, in an area surrounded by people that have to deal with this kind of violence in their everyday lives. It’s my duty to provide a safe space for my audience, and when that’s violated, I do get involved.” The woman had apparently been bustling through the crowd and standing in an area outside of the press zone. “I don’t have all the answers” she continued, “but I have a lot of love, and the courage to challenge a system that was built to put people like me down. That’s where I’m coming from.”

Lido’s dreamlike (‘Agua’), electronic, punky (‘Ruleta’) album sings of release, of hope, of nature and brotherhood (‘Al Unisono Viajan’) and sets traumatic memories free in order to move towards a bright future (‘QQTVB (Quiero que te vaya bien)’- ‘I Want You To Do Well’). All the best to this brilliant artist, ¡qué le vaya muy bien!

Listen to the album on bandcamp here and to BristoLatino’s favourite Lido remixes here: