BristoLatino editor-in-chief Rosanna West interviewed prize-winning Colombian journalist Diana Carolina Durán about her new role as Judicial Editor of El Espectador, and what made her want to follow in the footsteps of her legendary predecessors, who have long made the daily national a highly-respected newspaper.

When hit US Netflix series Narcos hit our laptop screens this summer, many of its viewers were reminded of – or perhaps informed of – the political turmoil, merciless violence and crippling fear that has plagued Colombia’s relatively recent history. The South American nation’s journalists, however, have never had a chance to forget. The show, which portrays the rise of drug Kingpin Pablo Escobar and his Medellín cartel’s calamitous impact on Colombian national security, references the important role of journalism in the country’s internal conflict. Media outlets in Colombia have sometimes been obliged, for their own safety, to remain silent when it comes to highlighting injustices and atrocities. Yet the country’s oldest national newspaper, El Espectador, has tried to be consistent in its dedication to unbiased and informative reporting, and in denouncing some of the shocking acts that have afflicted Colombia.

Fidel Cano Gutiérrez launched the newspaper in Medellín in 1887. Despite financial troubles causing a stint as a weekly rather than daily publication from 2001-2008, it has now bounced back and remains a very well respected and decidedly neutral entity, declaring itself to be in the “extreme centre”. The paper has never shied away from its responsibility to inform the public of the truth (at least where the truth can be found), a commitment tragically demonstrated by the assassination nearly three decades ago of former director Guillermo Cano Isaza, an event alluded to in Narcos. On 17th December 1986, two hitmen linked to drug cartels murdered Cano Isaza outside the paper’s offices, in an act of revenge for a campaign he had launched to denounce the influence of drug traffickers in Colombian politics. At a time when speaking out was perilous, Cano and his team did not turn their backs on their dedication to freedom of speech, choosing to be brave in pursuit of the truth.

This level of commitment to reliable and dignified journalism is something current El Espectador journalist Diana Carolina Durán has in abundance. On the 23 of September 2015, the 31 year old Cali-born journalist was offered the position of Judicial Editor at El Espectador. Not only does this change in line-up represent a new era for the section (which has long held great significance given Colombia’s tumultuous and complex political and judicial context), it also reflects social progression: Durán is the first woman to take on the job in the paper’s 128 year history.

Having met Durán during my six months of work experience at the paper, I took the opportunity to interview her about the new role and what inspired her to be a journalist.

What does being promoted to Judicial Editor, and being the first woman ever to be offered the role, mean to you?

It feels like a huge responsibility has been placed on my shoulders. I heard my editors saying over and over again: “This decision is one of the most important ones since El Espectador became daily again.” The judicial section has had a succession of great journalists in charge: Juan David Laverde (who was my editor for five years, while I was a judicial reporter), Libardo Cardona before him, and Jorge Cardona before him. Jorge Cardona! He’s one of the greatest Colombian journalists of all time, and he’s been my mentor as well. Of course it makes me nervous to know those are the shoes I’m meant to fill. I just hope I live up to the expectations my editors have of me. The fact that I’m the first woman in this post only means that El Espectador has broken a tradition; we’ve always had a man as editor of the judicial desk, and now it’s time for a woman to do it. I would like to show other female reporters who want to move forward in the profession that it is possible to get there. 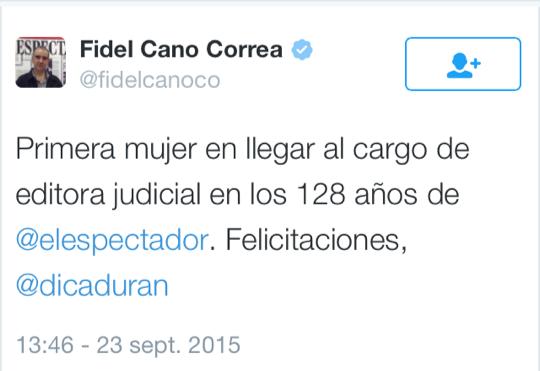 My BA was in journalism. In 2010, after a few years working, I went to London to do an MSc in Human Rights at the London School of Economics (LSE). In 2013 I was named Editor of the Metropolitan Section (Bogotá Desk), then I moved to the Investigative Unit, and now here I am.

Being placed on the Judicial Desk was a stroke of luck, I guess. I belonged to it from the start. Human rights violations, our internal conflict, corruption, drugs trafficking, high-level courts… covering these topics has always been my passion. Unfortunately Colombia is a great school for learning about these things, and working as a judicial reporter in this country means you have a lot to write about. My editor for the past five years, Juan David Laverde, was a brilliant teacher, as was Jorge Cardona. Fidel Cano is a wonderful director because he gives us as much freedom as possible to work. In a country like Colombia, doing so is the key to effective journalism. I have learnt (and am still learning given that I continue to work with them both) from the best.

Tell me about your motivation to become a journalist, and also specifically to work on the  judicial desk?

There’s one word to explain it all: vocation. Journalism is about people finding significance in different things, and wanting to share that with the world. Some journalists are excited to cover culture because they believe the world needs to know what a handful of people – writers, musicians, artists, for example – are doing for all of us. They feel a special connection with that world, which is a beautiful one. Other reporters, such as myself, connect with ‘hot topics’, with those stories that feel like history in the making. They make you run and question officials, talk to the victims, wonder about what’s not being said. It is absolutely necessary that we maintain that diversity in journalism, that reporters are drawn to different topics for different reasons. If not, we’d all be looking at things through the same lens, which would mean a lot would go unconsidered and uncovered!

Journalism for me personally is a window through which we can look into the consequences of war, of violence, and ponder over what human nature actually means. In a violent society like ours in Colombia, it is very important for us to be able to try and answer the questions surrounding brutal acts. Why did that man kill his neighbours? Why did that guerrilla girl allow her colleagues to rape another woman? How did that town cope with so much violence? The more answers we get, the more chance we have of figuring out how to become a different society.

In your opinion, what is your greatest achievement as a journalist?

To be given a seat for three weeks at one of the greatest papers in the world: The Washington Post. Home of reporters who have made history with stories like the Watergate scandal and the secret prisons of the CIA. In 2009, I submitted an investigation proposal for a fellowship and was selected alongside four journalists from Mexico, Venezuela, Brazil and Jamaica. We were given a seat in the newsroom in order to carry out our investigations. Mine was about paramilitary leaders who had been extradited to the U.S. in 2008. In the end, it was awarded a prize from the Inter-American Press Society, which means it was selected out of a pool of pieces from across the continent, written in Spanish, English and Portuguese. Mine was actually written in English and published on the Post website, which is funny because it’s the only time I have ever written – and had a story published – in English. The opportunity also led me to meet an inspiring mentor, Milton Coleman, the first black man to reach a senior position at the Post.

What has been the hardest moment of your journalistic career?

Some cases have been incredibly difficult to cover because of the personal feelings they have arisen in me. One that stands out is the case of Rosa Elvira Cely, a 35 year-old single mother who was brutally attacked in the National Park. She was hit, raped and impaled; her attacker mercilessly inserted branches and other things into her genitalia. She died four days later of her injuries. I have been covering violence for seven years, but you never get used to those stories. Human nature still overwhelms me.

How do you think the world of journalism has changed in Colombia in recent years, given the specific history of your country’s political/social climate?

The world of journalism seems the same to me. I mean, of course there are different contexts. As we speak, we live in a peace context, given that there is a peace-seeking process going on. But the situation was more or less the same 16 years ago, when the peace process with the FARC, the former one, began: some support it, some reject it, and we’re all looking for relevant information.

It hasn’t changed in relation to our political or social climate, it’s changed because of technology, both in Colombia and elsewhere. New technologies are reshaping the way we deliver news, and the way readers – or perhaps more appropriately audiences – interact with the information. Social media has a big role in that change.

While Colombia may be making steps towards peace (government negotiators and the FARC guerrillas recently managed to reach an accord over transitional justice, the most problematic subject to be dealt with during the ongoing peace talks in Cuba), the nation’s problems are by no means over. The National Centre for Historical Memory, a public entity established by President Juan Manuel Santos in 2011, reports that 220,000 or so people have died as a result of the fighting between government forces, guerrillas and right-wing paramilitary groups (about 80% of these being civilians), and some six million Colombians have been displaced from their homes, mainly in rural areas. These are consequences that cannot be swept away quickly. Although the end to Colombia’s internal conflict does seem to be in sight, journalists like Durán are sure to be reporting on its fallout for years to come.

Fearless and impartial journalism, the kind that has been carried out at El Espectador throughout the civil war, is therefore crucial to the country’s pursuit of justice. The legacy of Cano Isaza continues to inspire and set the standards of positive journalism around the world, a legacy honoured and celebrated by UNESCO when it created the Guillermo Cano World Press Freedom Prize in 1997 because his murder “is significant in terms of unpunished crimes against journalists”. In the words of the agency, the life of Guillermo Cano, his courage, his commitment to independent journalism and the tenacity with which he fought for his country are an example for the rest of the world to follow. Each year the prize honours a person, organisation or institution that has made an outstanding contribution to the defence or promotion of press freedom anywhere in the world, especially when this has been achieved in the face of danger. In 2015, Syrian journalist and human rights activist Mazen Darwish (who is currently imprisoned) received the prize “in recognition of the work he has carried out in Syria for more than ten years at great personal sacrifice, enduring a travel ban, harassment, as well as repeated detention and torture”.