“Are you watching Narcos on Netflix?”. This is one of the most frequently asked questions from my friends at home.“Of course I am,” I tell them. What they don’t know, however, is that we are watching it from two very different perspectives.

After what seemed like a hundred recommendations from friends, I decided to start watching the series out of pure curiosity. Before arriving in Colombia, I knew the basic history of the country. However, for one reason or another, I had never studied it in depth as part of my Spanish degree.

On top of having to grapple with a new culture, language and city, I felt very ‘out of it’ for not completely understanding the history of the country I was living in. So, watching Narcos seemed like a good way to familiarise myself. It seems I was wrong.

During my first three months in Colombia, I learnt a little about the complexities of the country. Helped by this new-found understanding, with each episode of Narcos I sat down to watch, I began to increasingly doubt the image of Colombia that the series conveys.

Despite not being Colombian myself, I realised pretty quickly that the majority of the actors in Narcos were not either. Unfortunately, the unique Colombian vocabulary and particular accent makes this painfully obvious.

Take for example the role of Pablo Escobar, played by Brazilian actor Wagner Moura, who speaks with a strong Brazilian tone throughout the series. The show tries to cover it up by randomly slipping diminutives like ‘hermanito’ into the dialogue, as well as typical Colombian dichos like ‘marica’ and ‘güevon’. Unfortunately, it all just ends up sounding a bit odd.

In fact, out of all the main characters, there is just one Colombian actor: Juan Pablo Raba. All the other Colombian actors have mere secondary roles.

Director José Padilha’s motive behind filming the series was of course to dramatise Colombia’s recent history, targeting a global audience. However, this hasn’t sat very well with a lot of Colombians.

It is common knowledge that one of the best ways to learn about the history of a country is by talking to its people. When I did just this, I was met with overwhelmingly negative feedback about the show.

A common perception is that the American production team are using Narcos to exploit the historical events that near broke Colombia for over a decade, and are simply profiting from the dramatization of what really happened here in the 80s and 90s. For many, Narcos is yet another example of the undesired American intervention in Colombian affairs.

One thing that jumped out at me personally was the way the show portrayed the M19 siege of the Palace of Justice, which happened here in Bogotá 30 years ago. In my current job at El Tiempo, Colombia’s leading national newspaper, I learnt a lot about this time period as I prepared material for our recently-launched Twitter account ‘@TuneldeELTIEMPO’. The social media project consisted of chronological tweeting of the two-day-long series of events, in real time, as if they were actually happening. 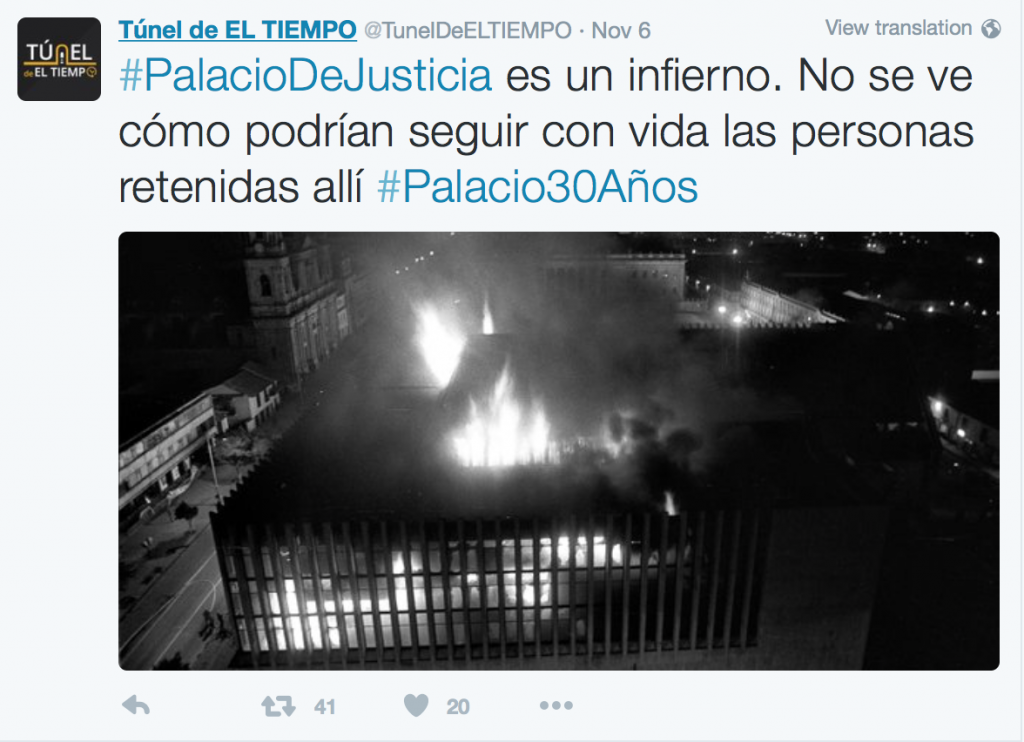 Yet in Narcos, the historical importance of the siege seems significantly reduced. The causes and facts surrounding the event are far from revealed, and there are reasons behind the siege that the programme doesn’t even mention.

One final complaint, and I’m not alone in thinking this, is that Narcos almost glorifies Pablo Escobar. Yes, it’s a drama, but I can’t help but think that the show’s dramatic impact comes at the cost of its treating very serious and destructive events relatively lightly. Events that shook Colombia to its core, and continue to do so today.

This glorification can be seen with just a quick glance at the Narcos Instagram account. The photo below, captioned “Pablo’s #WisdomWednesday”, caught my attention. 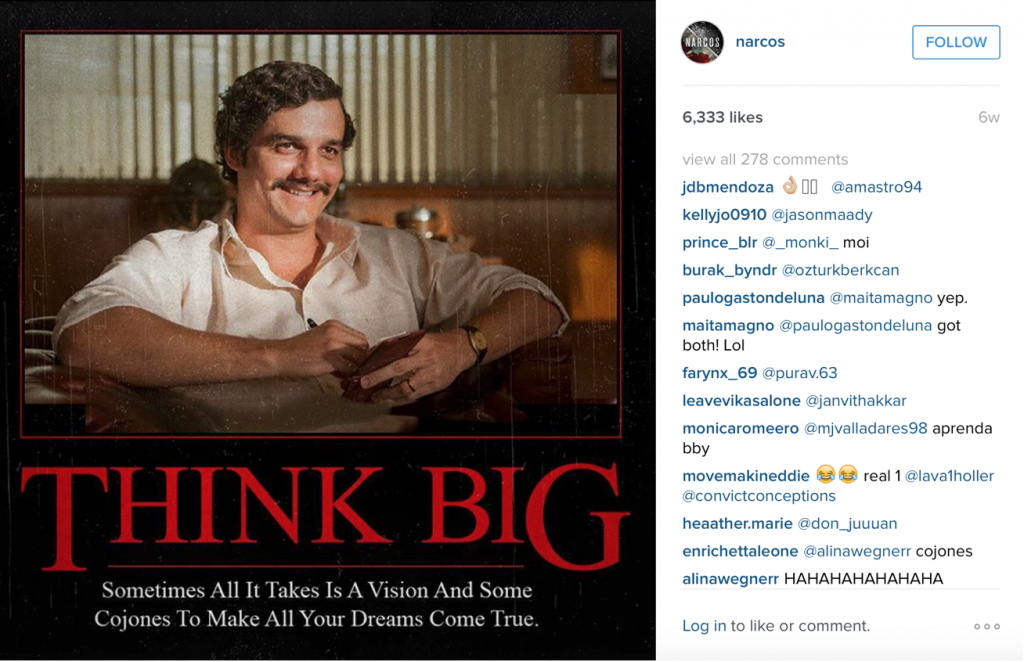 Despite all my qualms, I must admit I did enjoy the show. A lot. It’s gripping, fast-paced and leaves you wanting more. I could have made my way through the entire series in a day, even if it does miss out quite a few important details. I just wonder whether the team behind Narcos knew the effect it would have in Colombia before they started filming.

I would say to those watching who have never been to the country (to use a very Colombian expression): “ojo”. In other words, be aware that the story conveyed in this series, although based on fact, is far from a true representation of what happened. The Colombian version of events is quite different, and there is much more to say on the subject than what can be fitted into 10 episodes.