Patricio Guzmán, one of Latin America’s most famous documentalists once said, “un país sin cine documental es como una familia sin álbum de fotografías” — “A country without documentary film is like a family with no photo albums”. This quote was used to introduce us to Bush House’s screening of six distinctly Peruvian films. All donations from the evening went towards EducArte, an arts education organisation which offers free filmmaking workshops for underrepresented Peruvian women.

An extensive introduction from Dr Elisa Sampson Vera Tudela, Senior Lecturer in Latin American Studies at KCL, and Peruvian-German filmmaker, Karoline Pelikan (Pelikan Films), set the scene for an evening of diverse short films illustrating life in Peru. The films explored the many aspects of Peruvian life, from going out plantain picking with a machete to the experience of growing up in the city despite your family roots being in the countryside.

In the documentary Earth’s Children, Jorge and his brothers spit seeds at each other, sing pop songs alongside the Peruvian national anthem and copy their elders spontaneously crying ‘Viva el Perú’. These humorous and enchanting practices normalise the hard work they do collecting plantain each day. They know their land intimately, understanding which vines they can swing off, which pools they can splash around in and which bubblegum plants they can eat. In many of the films the children stood out as being the most vibrant on screen, alternating between showing off for the camera and displaying their brazen ability to act authentically and frankly, inviting viewers into their world.

Filmed and edited in the style of the late 20th-century indigenous Peruvian photographer Martin Chambí, Q’eros: hombres de altura follows a group of staunchly Quechua Peruvians who live 5,000m above sea level, far from where the conquistadores can reach. They consider themselves ‘the last surviving Incas’ and regularly read coca leaves to hear what fate Pacha Mama holds for them. They are proudly self-sufficient and unafraid. The grainy audiovisual material creates a fierceness even more vivid than Chambí’s own indigenista images. As Karoline noted in her introduction: “Don’t feel pity for them, they’re going to fight; they’re warriors!”

In Hasta Que Regrese, Luisa García Alva asks a childhood friend how she can reconnect with her familiar pueblo. Although visually representing the town and it’s annual festival of colour, fire and procession, it is an introspective film about overcoming separations and finding what’s at the heart of what we call ‘home’. Co-produced by Guarango Cine, a company headed by Ernesto Cabellos who directed La hija en la Laguna, this auteur documentary struck a cord with many in the audience from various different backgrounds. 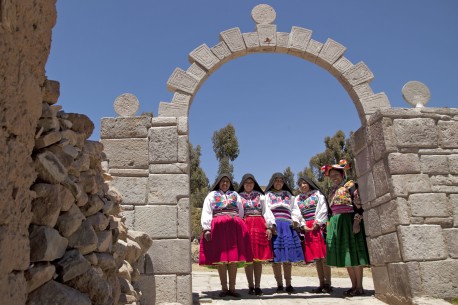 A still from the documentary El sueño de Sonia

With each short film, the audience gained a deeper understanding of how people live in this complex country. El sueño de Sonia (Sonia’s Dream), told us of Sonia’s journey to becoming a chef who teaches women throughout the country the culinary secrets of their ancestors, championing the gift of education. Shipibos Konibos: Hombres Monos, Hombres Peces took us deep into the jungle, where ayahuasca helps Alejandrina cope with the disappearance of her daughter and killings suffered by her community. Q’eros, Hombres de Altura spoke to us in Quechua and showed us that the Inca spirit is still alive, while Hijos de la Tierra inspired us to better know our land. Hasta Que Regrese showed us the joy and the pain of returning home, whilst Aya told us of the clash between a young boy’s own reality and a capitalist world unattainable to him, as he scrapes salt into packages with his bare hands, saving up his money to help his ailing mother.

The £140 collected in donations for the EmpoderArte project will facilitate a screening in Trujillo, Peru, where female participants of the EmpoderArte workshop in October will be able to showcase their work and enter into dialogue with the audience. Thank you to all those involved.