BristoLatino politics editor Alfred Davies reports from The Road to Peace: Lessons from Colombia, a two-part interdisciplinary event hosted by the University of Bristol’s Global Insecurities Centre on 31 January 2019. Host Laura Hankin was joined by panellists Dr Andrei Gómez-Suarez and Gwen Burnyeat of UCL, who carefully unpicked the complexities of ending war and building peace in Colombia.

The history of conflict in Colombia is almost as complex as it is horrific. Numerous actors including – but not limited to – leftist guerrillas, far-right paramilitaries and the Colombian state have committed the most unimaginable atrocities. The conflict between these groups and other actors has has left hundreds of thousands of Colombians dead and many millions more displaced. In 2016, the signing of a peace deal by then-president Juan Manuel Santos and the FARC (a far-left guerrilla group) was meant to be the beginning of the end of over fifty years of violence.

Unfortunately, the pragmatic discussions held at The Road to Peace: Lessons from Colombia offered a far bleaker outlook on the future of peace in Colombia over two years on from the signing of those accords.

The shocking bloodshed and the sheer complexity of the longstanding Colombian conflict is well-demonstrated by the experience of the cocoa-growing community of San José de Apartadó in the north-western region of Urabá.

The dwellers of this particular village are the subject of Gwen Burnyeat and Pablo Mejía Trujillo’s moving documentary Chocolate of Peace (2016), which tells the story of the peaceful resistance of a community that has constantly striven to remain nonpartisan in the context of a conflict which has affected all of Colombian civil society. The film was screened as part of the opening section of the event  entitled ‘Ending War’, offering alternative perspectives on the conflict.

During the late 1980s, support for the leftist pro-peace party the Patriotic Union (UP) began to grow in San José de Apartadó, and villagers were accused by various right-wing groups of being guerrilla sympathisers, leading to the murder of various community leaders.

From late 1996 onwards, following further violence, members of the community began discussing the possibility of forming a peace community, neutral toward all actors in the conflict. Soon afterwards, on 23 March 1997, the Peace Community of San José de Apartadó was founded as a means of converting violence and displacement into sustainability and peaceful resistance, with the exportation of organic, fair trade cocoa central to this.

The collective of peasant farmers has continued to struggle for peace, in spite of the presence of illegal paramilitary groups in the region, and the stigmatisation of the community which has provided reason for the murder of hundreds of farmers in the region. 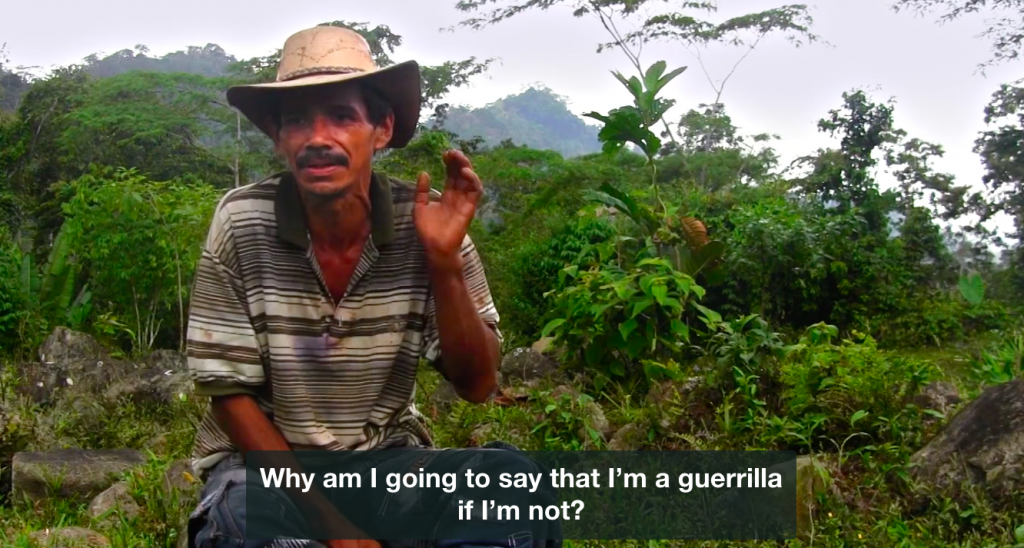 Most notably, in February 2005, a horrific massacre near the village – orchestrated by Colombian Army and carried out by right-wing paramilitaries – left five adults and three children dead. Among the dead was Luis Eduardo Guerra, the community’s leader. “With that massacre they wanted to tell us again that social organisations are not allowed”, artist María Brígida González movingly recounts in the documentary.

In the discussion that followed the film screening, the interesting and complex issue of the reality of State presence in remote rural areas was raised. The Colombian state has often been criticised for its lack of presence yet in these areas this may often consist, in reality, of a corrupt or inefficient military presence. This raised the fundamental question of what kind of State presence citizens would want, if any at all.

In spite of that terrible massacre in 2005 – as well as various other intrusions – the Peace Community of San José de Apartadó continues to resist, as is told by Mejía Trujillo and Burnyeat’s powerful documentary. Constant to the film are the intimate ties between nature, cocoa production and peaceful resistance.

The growing recognition for the Peace Community lead cosmetics giant Lush to invest in the village’s cocoa, creating a ‘Peace Massage Bar’, while villagers went to speak in a Bogotá café about these important links.

A particularly interesting theme that became evident during the documentary was the discrepancy between urban and rural communities in Colombia – and the lack of awareness of urban communities about the reality of rural conflict – illustrated in the documentary by Peace Community farmer Jesús Emilio’s meeting with Bogotanos in a café in the capital city. 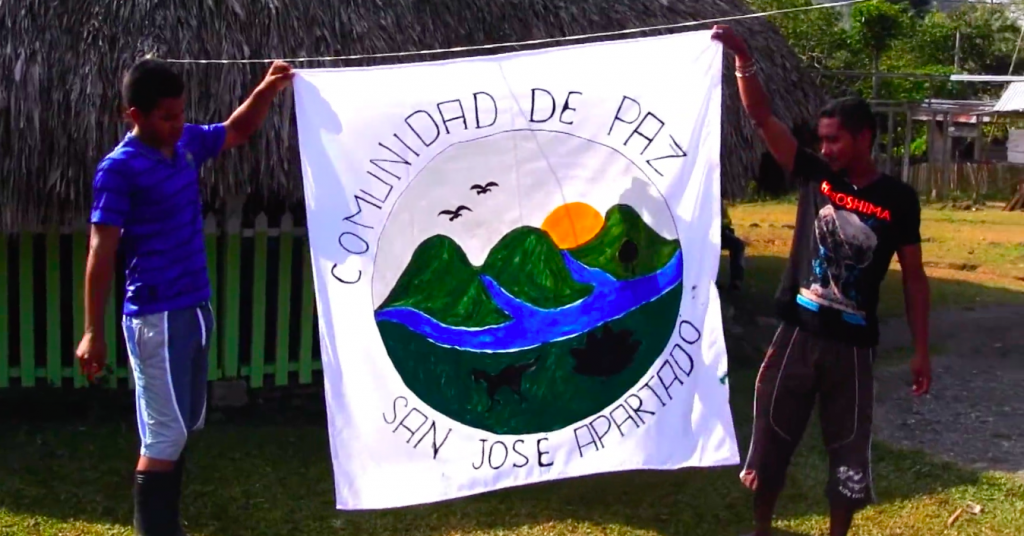 Villagers raise the Peace Community flag in the documentary

The film screening and subsequent discussion offered a more personal connection to a conflict that can often feel highly complex and, inevitably, very far away. What we choose to – or not to –  consume in the UK is intimately linked with acts of conflict and resistance in Colombia, and the film encourages viewers to reconsider their choices in order to support the building of peace.

During the second section of the event, under the title of ‘Building Peace’, panellists Andrei Gómez-Suarez and Gwen Burnyeat discussed the serious challenges to the building of peace that Colombia currently faces.

The details of the peace accords were well explained by Gómez-Suarez, director of the Rodeemos el Diálogo foundation, a group that he founded in 2012 which seeks to support the Colombian peace process.

Gómez-Suarez’s accessible and thorough explanation of the terms of the agreement was something that, according to all panellists at the event, was lacking in the build-up to Colombia’s 2016 referendum, in which the Colombian people narrowly rejected the original peace deal. 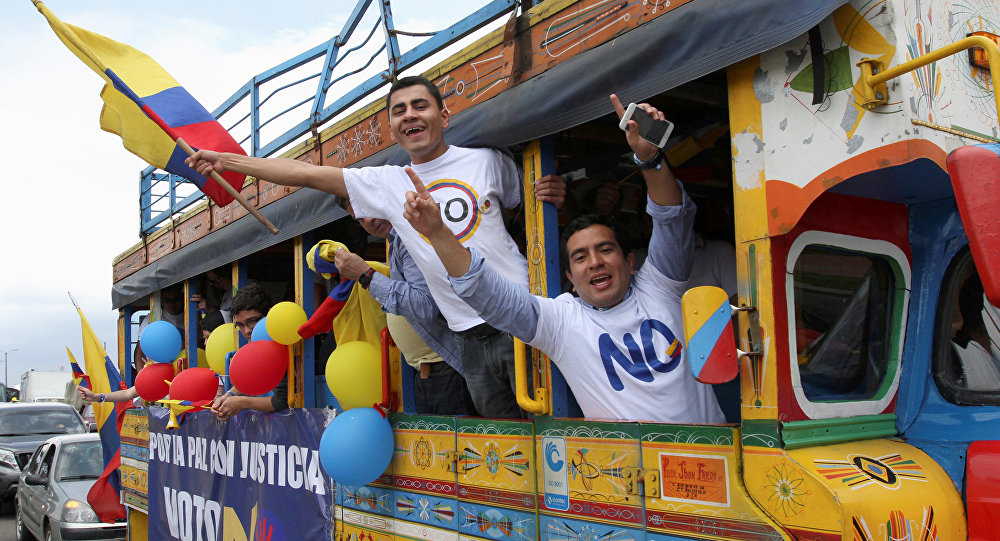 Indeed, the speakers noted that confusion and manipulation present in the run-up to that referendum was even likened to that which was experienced in the UK that same year. As with Brexit, a supposedly single-issue referendum was intertwined and conflated with other concerns, which in Colombia’s example included many societal issues including gender and sexuality. In the context of a society which still, generally speaking, has very traditionalist and conservative tendencies, these issues aided a swell of support for the ‘No’ campaign led by former president Álvaro Uribe.

The terms were ratified shortly later and signed by both houses of Congress in November 2016. Unfortunately, however, this second section of the event demonstrated that, over two years later, the possibility of building true peace in Colombia appears both complex, and, in the near future at least, unlikely.

Gómez-Suarez, originally from Pasto in the southern department of Nariño, returned to Colombia from the UK during the peace process, with the optimism that much of the conflict that had been present throughout his life seemed finally to be coming to an end.

However, soon after the election of Iván Duque as Colombian president in June 2018, the self-proclaimed optimist headed back to the UK with the feeling that he – and his country – had failed.

Duque, the candidate of former president Álvaro Uribe’s Democratic Centre Party, is ‘unwilling’ to implement the terms agreed under the deal, a situation which, in part, has left a rebranded form of the old cycle of violence more alive than ever in Colombia, according to the panellist. 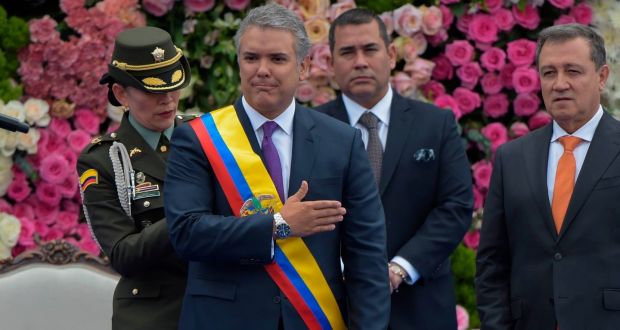 The speakers cited various concerns over the future of peace in Colombia, including the hundreds of community leaders and human rights activists that have been murdered in Colombia since 2016, the continuing operation of FARC dissidents and other leftist guerrilla groups including the National Liberation Army (ELN), as well as substantial budget cuts to key bodies in the peace process, such as the Special Jurisdiction for Peace (JEP) and the Truth Commission.

The speakers placed these serious concerns over peace in Colombia within a rapidly-changing and increasingly right-wing geopolitical context. The panellist noted the elections of populists like Donald Trump in the USA and Jair Bolsonaro in Brazil as examples of a reappearance of a form of worldview that we had assumed was something of the past.

Gómez-Suarez stated that he hoped Rodeemos el Diálogo would be able to support the implementation of the peace process in spite of this complex and concerning context.

International engagement and solidarity will certainly be of great importance in the future of the implementation of the peace process in Colombia, and the significance of events like this in encouraging such participation cannot be underestimated.

Undoubtedly, work like that of Mejía Trujillo and Burnyeat can support this process too, in offering greater awareness within Colombia of the experiences of those communities that have been most affected by conflict, particularly given the urban-rural divide which is still present. Furthermore, groups such as Rodeemos el Diálogo that closely follow the implementation of the peace process will be key.

Above all else, however, in spite of suffering the most horrific and unimaginable violence, it is groups like the Peace Community of San José de Apartadó and their incredible sense of humanity that continues to offer a beacon of hope as Colombia prepares for this new stage in its history.