Written by BristoLatino
Posted on January 8, 2015

As Mexican police report today that 10 decapitated bodies and 11 heads have been found in a grave in the Southern state of Guerrero, the whereabouts of the missing teacher training students remains unknown. Sam Benstead asks how Mexican authorities are able to retain their position in power when they are complicit in violence, murder and the suppression of free-speech. 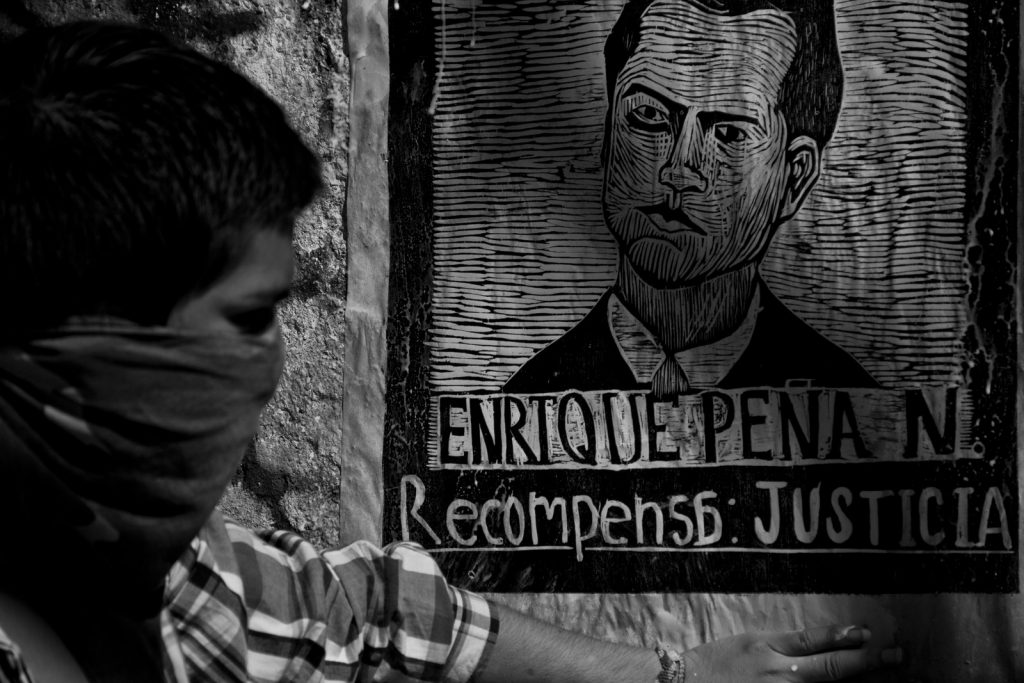 Mexico is the fourteenth largest economy in the world, wedged between Spain and South Korea in terms of GDP. It exports goods and culture around the globe and has hosted two World Cups and an Olympic Games. It is fully integrated into the global economy and global conscience.

How is it then possible that the current Mexican government, whose president has been praised internationally for his sweeping economic reforms, can carry out an act of political violence so extreme that it would not be out of place in Pinochet’s Chile or Videla’s Argentina, two dictatorships responsible for unforgivable human rights abuses?

On September 26th, 43 trainee teachers were arrested by local police in Iguala, in the state of Guerrero, on the way to a protest against discriminatory hiring practices. The mayor ordered for the protest to be stopped so that it wouldn’t interrupt a social event that his wife was hosting. The proceedings turned violent and six students were killed, whilst 43 more were rounded up by police. The mayor then ordered for the students to be handed over to a local gang that his wife’s brothers belong to, Los Guerreros Unidos, and the students ‘disappeared’.

In early December, forensic experts identified the remains of one of the students, Alexander Mora, in a landfill in Southern Guerrero. The remaining 42 students remain ‘disappeared’, but in the search for their bodies no less than five mass graves have been discovered. Despite the vast quantities of charred and tortured corpses found since the incident, DNA tests have been inconclusive about their identities.

The government’s defence is that the problem is confined to Iguala. When questioned, the Attorney General replied:  “A crime of state? … Iguala isn’t the Mexican state.”

In fact, it is a state-wide problem; municipal police forces are corrupted by organised crime across the country. Mexico is so decentralised that different regions are under the control of different drug cartels, and the central government can pretend not to know.

The Iguala case stands out from the countless other violent acts attributed to Mexico’s drug war for one reason: the drug gang murdered students, and not rival traffickers. The students were protesting for education reform against the government. What does this have to do with drug trafficking? It has everything to do with drug trafficking because the government in many ways is the same as the drug cartels. Officials accept bribes and allow the drugs, and profits, to flow. In order to stop the protest the mayor turned to his ally, Los Guerreros Unidos.

The Iguala massacre is a manifestation of the problems that Mexico has faced for twenty years – corruption, impunity, and unspeakable violence. Mexicans are angry at the government and are calling for change but are voiceless against the might of the drug cartels and the government that appeases them.

Mexico’s situation can be summed up by the way that the Attorney General, Jesús Karam, ended his press conference about Iguala.

Perhaps the government has had enough of the backlash from their latest execution, but as they are saying in Mexico…if you keep planting bodies, who knows what you will grow?