From Nigeria to Cuba and beyond with Ibeyi

Written by BristoLatino
Posted on November 11, 2015

Ibeyi are a sister duo that channel the musical heritage of Cuba back to its Yoruban roots. Their West-African folk and Caribbean influences are meshed with contemporary sound, creating something decidedly special. Helen Brown heard them live.

It is fair to say that Ibeyi are descended from musical royalty. Lisa-Kaindé and Naomi Díaz are the two surviving daughters of Anga Díaz, the percussionist from Buena Vista Social Club, and the French-Venezuelan singer Maya Dagnino, who now acts as their manager.

The name ‘Ibeyi’ means ‘twins’ in Yoruba, the Nigerian language brought to Cuba at the time of slavery. The band name is not just an arbitrary translation: the Yoruban people have the highest rate of fraternal twins in the world, resulting in the integration of a special twin belief system within the Yoruba religion. “Are there any twins in the audience?” Lisa asks during a concert in her delicate French-Cuban accent, stirring cheers from pairs of twins scattered throughout the crowd, raising entwined hands. 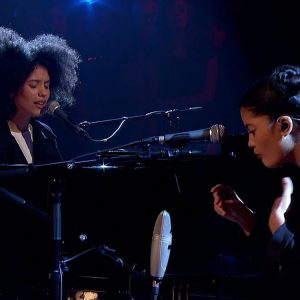 I first saw Ibeyi at the front of a very small crowd at Secret Garden Party, during the first glimpse of sun we had seen that weekend. They wore entirely black, not adding needless decoration to their natural beauty, and sang with a soulful power which felt like it was directed  at each member of the audience individually.

Someone drunkenly shouted, “YOU’RE FIT,” to which they smiled; they are undeniably beautiful. Naomi, the percussionist, boasts a sheet of dark wavy hair, interesting wide-set eyes and thick brows. Her twin Lisa has a thinner and more angular face, crowned by an afro. Lisa does the majority of the singing and song-writing, while Naomi is responsible for the percussion and production of their music. Naomi uses traditional afro-cuban percussion instruments such as the cajón drum her father played and the double-headed batá drum, as well as beating a hand on her chest to create natural percussion. In interviews the sisters finish each other’s sentences and describe how they connect seamlessly over their music; they were able to speedily produce their first album this year, aged 19. 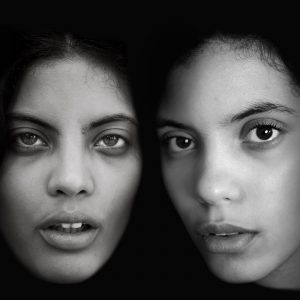 The cover of Ibeyi’s self-titled album

In their most recent show last week at Koko Camden, they introduced their album to the audience by saying “we decided to make an album about our family – to celebrate them.” Their family has suffered much fragmentation and bereavement, spurring elegy songs such as ‘Think of You’ dedicated to their dead father, and ‘Yanira’ written for their dead sister, transforming their grief into a creative homage.

The sisters produce music that is similar in structure to a prayer, with repeated words and references to the Cuban religion of Santería, which developed among the country’s West African descendants. Their music is immersed in a tapestry of cultural significance, as the twins sing in Spanish, French, and Yoruba, borrowing ancient Yoruban chants and alluding to Yoruban myths. Despite their deep respect for their ancestry their music is extremely modern, owing to Naomi’s love of electronica and hip-hop merging with Lisa’s admiration of old soul and jazz artists.

Each element of the band displays an inherent edge, from their sleek black and white album cover to the projections of smoke converging into wispy faces behind them as they perform. The duo often turn to each other when they sing in Yoruba, their smiling profiles and the strong sound of their harmony assuring that seeing them live is a uniquely endearing experience.