Dubbed an “absurd, comical, and emotionally charged ritual of dance theatre” by Bristol 24/7, the four LADYLIKE performers used animalistic, soft, powerful and vulnerable movements to question sexuality and embody the solidarity of sisterhood. With an all-female cast, the performance took place within a circle of chicken feed, marking the gendered space of the ‘chicks’. Typical female tropes and professions were acted out, sometimes with humour, sometimes with sensitivity, and other times with violence.

The more disturbing scenes which pick apart the nuances of desire and consent, sex and violence were made palatable by inverting key symbols of vulnerability. Azara Meghie played a masculine role throughout most of the show, but at times she fluidly played with gender, asserting herself as a more feminine force. In the more violent scenes, the characters dressed the victim of violence, rather than leaving them undressed and exposed. This seemed an action of solidarity and protection between the four female dancers, although it also resembled the multiple masks and costumes forced upon women. 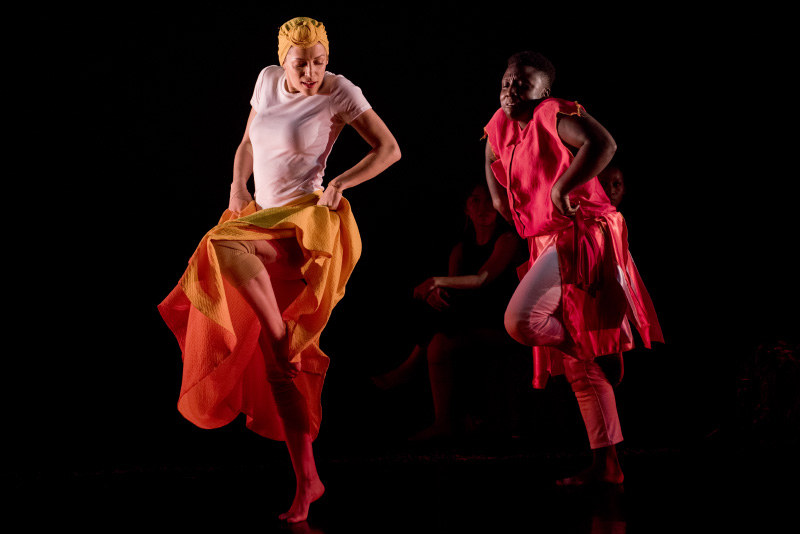 Watching two females dancing bachata, deeply in sync, with curiosity and desire fuelling their curvaceous, rolling movements was sensual and stunning. The dance brought astonishing beauty back to couples dances often shared by strangers and almost always by a binary couple. This was only one example of many from the 55-minute piece which questioned Latin American and worldwide gender stereotypes.

Humour reigned in a comedic look at the way women pamper and prepare themselves, as the characters dolled themselves up using oregano, salt and spices in place of shampoo and shower gel. Hsing-ya Wu’s movements were exaggerated, athletic, captivating and disturbing. The hen circle created a safe space within which consent, desire, violence and sensuality could be examined and explored.

Ultimately it is sisterhood which brings positivity, vibrance y un poco de perreo to this fantastic performance, with a diverse soundtrack that elicits myriad dance styles and the breadth to unchain ourselves. Check out @ellamesma on Instagram and follow the rest of CASA festival’s events here.