Ahead of the second-round of Brazil’s presidential election, BristoLatino‘s Helen Westlake spoke to Rio de Janeiro-based underground art group ‘A Igreja do Reino da Arte’ about their politically-charged work, with a discussion about a perceived shift in the understanding of Brazilian national identity in the midst of the tense current political climate.

A Igreja do Reino da Arte – a play-on-words on the name of the biggest branch of evangelicalism in Brazil, A Igreja Universal do Reino de Deus – is an underground artist group based in Rocinha, Rio de Janeiro, founded by Raoni Azevedo, Eduardo de Barros and Maxwell Alexandre. After watching Downtown 81, a film starring the late Jean-Michel Basquiat set in the New York underground art scene of the early 1980s, the three Cariocas started their ‘Church’, launching their own underground art movement to challenge the wealthy Brazilian upper-class monopoly of the country’s art scene.

Indeed, Maxwell in particular is making waves at the moment – he held his first ever solo show in Rio last month and had paintings put up in the MASP (Sao Paulo Museum of Art). He and Eduardo both present narratives and experiences of favelas in their paintings, giving “favelados” a voice which is often ignored or censored. BristoLatino spoke to Raoni and Eduardo to get a better understanding of who A Igreja do Reino da Arte are, as well as their thoughts on Brazil’s current political climate and its effects on society in the run-up to the second-round of the presidential elections.

BristoLatino: What was the incentive in creating A Igreja do Reino da Arte? And why did you choose to create an organisation based on religion?

Raoni: There are many reasons, actually. Back in 2017, when I had just come back from studying at Goldsmiths in England, Max, Edu and I started discussing the lack of presence or movement of young artists in Rio. We had just watched Downtown 81, and questioned why there was no such place for underground artistic expression here. To be big in the art game in Brazil you had to be a multi-millionaire, basically. So because Eduardo and I are from Catholic educations (we don’t practise Catholicism now, we just grew up with it), and Maxwell is of a Protestant upbringing, we were interested in the connection between these structures and art. Catholic art from the 16th and 17th centuries is what gave birth to what we know today as fine art. Religion is a particularly poignant topic here in Brazil, as both the Catholic and Protestant Church are colonising religions in this country. Religion in our context is therefore a tool that creates power structures to keep certain people at the top and others stuck at the bottom, which we parallel to the elitist nature of art. We thought that combining the idea of religion and art would create a nice tension to begin working with, and would return the sacredness of creating art to the people who are not at the top of Brazilian society.

Eduardo: To add to what Raoni just said, we created this community to bring together people who are interested and dedicated to art but who don’t feel like they fit into other more formal creative spaces or who don’t often get to interact with other creatives. We thought creating this ‘Church’ would give people like that motivation to be proactive in their work, provide an opportunity to bounce ideas off others, to participate in a creative exchange, and to be a part of a bigger movement which gets stronger with every new member.

BristoLatino: Does this mean there is a power structure in your “Church”?

Raoni: Although it was Eduardo, Maxwell and I who founded the ‘Church’, in the group we are all just members, there is no hierarchy. We all play around with religious terms such as pastor, prophet, father, and saint (we recently held a canonisation ceremony for one of our members). Edu for instance is more interested in the idea of creating a prophet persona for himself because it fits in with his work. I take on the role of spreading the word about us and on what we do, which I guess would make me a preacher, but I don’t know if I want to commit to officially giving myself that title.

BristoLatino: Speaking of prophecies, can you tell me more about the “green and yellow apocalypse” concept you have been exploring?

Raoni: We recently held an event at our church which we called a First Communion for Eduardo and myself, which was about bringing us and both of our works together to officially present it to everyone. We made two huge piñatas in the shape of our heads, which we bashed in and destroyed on the evening. We called the performance the ‘green and yellow apocalypse’. The aim was to start a conversation on what it would mean for Brazil to lose its reputation as a paradise of samba, heat and laid-back people, in the context of the current political turmoil and violence it’s going through.

Eduardo: Raoni and I worked at the ‘Church’ (a building we have in Rocinha which we opened as a base for the organisation and so that all of our members have a space to work in if they need one) together to work on this idea for about two weeks after our First Communion. I had already created a series of paintings related to our current political climate and to biblical symbolism, especially ideas of apocalypse. Raoni’s work during the two weeks also developed ideas of a new surging Brazilian identity, which no longer has any relation to Tropicália (the Brazilian artistic movement from the 1960s which was a protest against the dictatorship at the time) or to the old image of Rio he’s just described. Brazil is going through some changes due to this negative political climate and to the media’s focus on corruption. The corruption scandals are being portrayed as the central issue, completely overshadowing a lot of the other aspects of the situation. The ‘green and yellow apocalypse’ theory is a prophecy predicting the destruction of the old perception of Rio, which has already started happening, and the birth of a perhaps more pessimistic and toxic new national identity.

THE ‘CHURCH’ AND THEIR “PESQUISA DE INTENCÃO DE VOTO”

In the weeks running up to the first-round of the presidential elections, the group posted videos on Instagram of a survey they held in several parts of Rio. They called this a “pesquisa de intenção de voto” (research on voting intentions).

The artists fashioned five dummies, each with the face of one of the five main candidates running at the time. These included the two remaining candidates, Jair Bolsonaro (Social Liberal Party) and Fernando Haddad (Workers’ Party), alongside the already-defeated Ciro Gomes (Democratic Labour Party), Geraldo Alckmin (Brazilian Social Democracy Party), and Marina Silva (Sustainability Network). The group then went out into the city centre and lined them up in front of a table displaying a selection of objects, inviting those who walked past to “cast their vote” using the objects in whichever way they liked, or without using them at all. 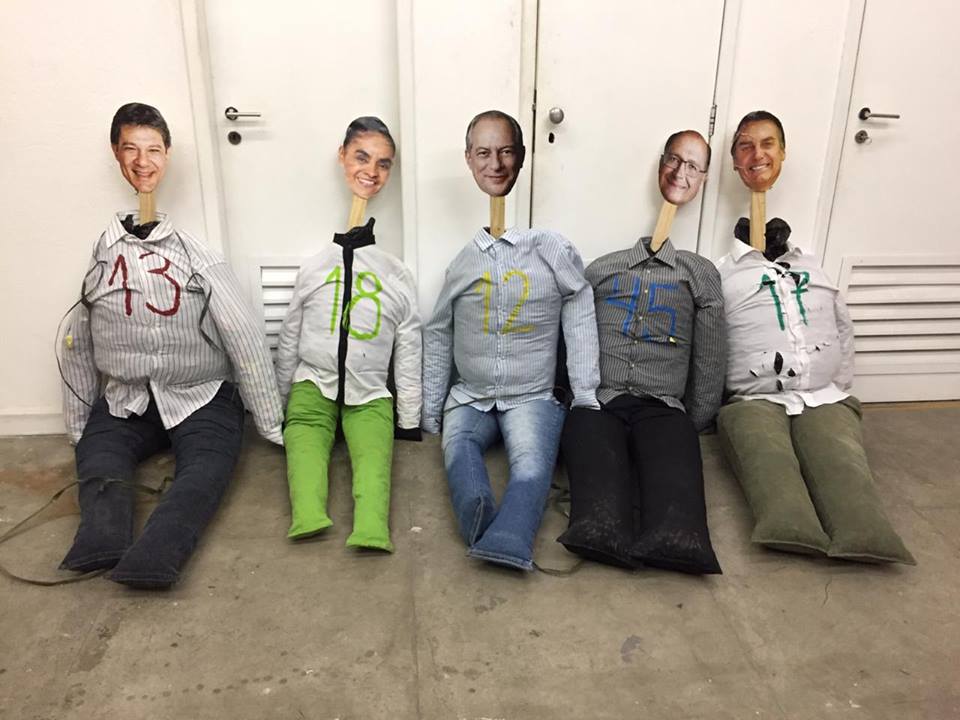 This part of the performance was inspired by Marina Abramovic’s famous experiment from the 1970s, during which she surrendered herself to the public by allowing anyone to use any of the object laid out in front of her to do whatever they wanted to her. The Igreja do Reino da Arte’s experiment turned out to be a demonstration of the violence that is becoming a part of Brazil’s national discourse in the current political climate.

Indeed, most people used violence against the candidates, especially Jair Bolsonaro, resorting to hitting them with the pan or stick provided. Disconcertingly, many used the knife provided to stab the candidates repeatedly in the stomach, and it must be said that it was, again, the Bolsonaro dummy that ended up victim of much of the public’s anger. The news of the stabbing of the far-right candidate in the southeastern state of Minas Gerais was still fresh in Brazilian news at the time the ‘survey’ was taken.

However, many passersby refused to use violence on the dummies, declaring that there was already enough happening around them. Clearly, the Igreja do Reino da Arte aren’t the only ones aware of the crisis of violence that seems to be consuming the Brazilian nation.

Two particular videos sum up the polarisation which defines this stage of the presidential election. In the first of these, a man kisses the Bolsonaro dummy on the forehead and shouts: “Let’s change Brazil! Enough with all that is wrong in Brazil!”. In the second video, a man hits the Bolsonaro dummy until the face cutout falls off, and then turns to the camera with his hand held out in a L shape and says: “Go Haddad! Go Lula, the best president the Republic of Brazil ever had”.

“Brazil is split between the two remaining candidates, and the polarisation of the two has created rivalries and aggressiveness towards the opposition similar to that seen in football in Brazil, for example the rivalry between us and Argentina, or between our local teams Vasco and Flamengo”, notes Eduardo. The young artist points out the use of the Brazilian football shirt in the right campaigns during this year’s elections and likens this to the changing of Brazilian national identity. The Brazilian national motto of “Order and Progress” has never seemed more redundant.