The Centre of Rio de Janeiro, often described as the heart of the city, is a far cry from the beautiful beaches of the South Zone, so well known by the millions of tourists that flock to Brazil in search of sun, samba and caipirinhas every year. With Portuguese architectural influences from the buildings to the floor, the centre of Rio continues to be one of the oldest, yet most beautiful and characteristic parts of the city. For me, there’s something special about it which makes it stand out from other areas, that tourists would be silly to miss. Unfortunately, however, it’s not one of the most accessible places in the world, even for an able-bodied person.

Emily Yates is an English wheelchair user with cerebral palsy. She has been in a wheelchair since she was 9 years old and still frequently travels all over the world. Through her volunteer work in the London 2012 Paralympics, she was thrown into the spotlight after Lord Sebastian Coe quoted her words in his closing ceremony speech. She then managed to secure a job working as an accessibility consultant for Metrô Rio. In 2016, however, she was given her toughest challenge yet, and was asked by Lonely Planet to write an accessible tour guide to Rio de Janeiro, ahead of the Paralympic Games that will take place in September.

I spent the day with her in Rio de Janeiro’s Centro. Our main objective was to find the best and most accessible tourist points for Emily to put in her guide. Despite the road works, and of course the traffic, we managed to visit a series of museums, churches, restaurants and shops. 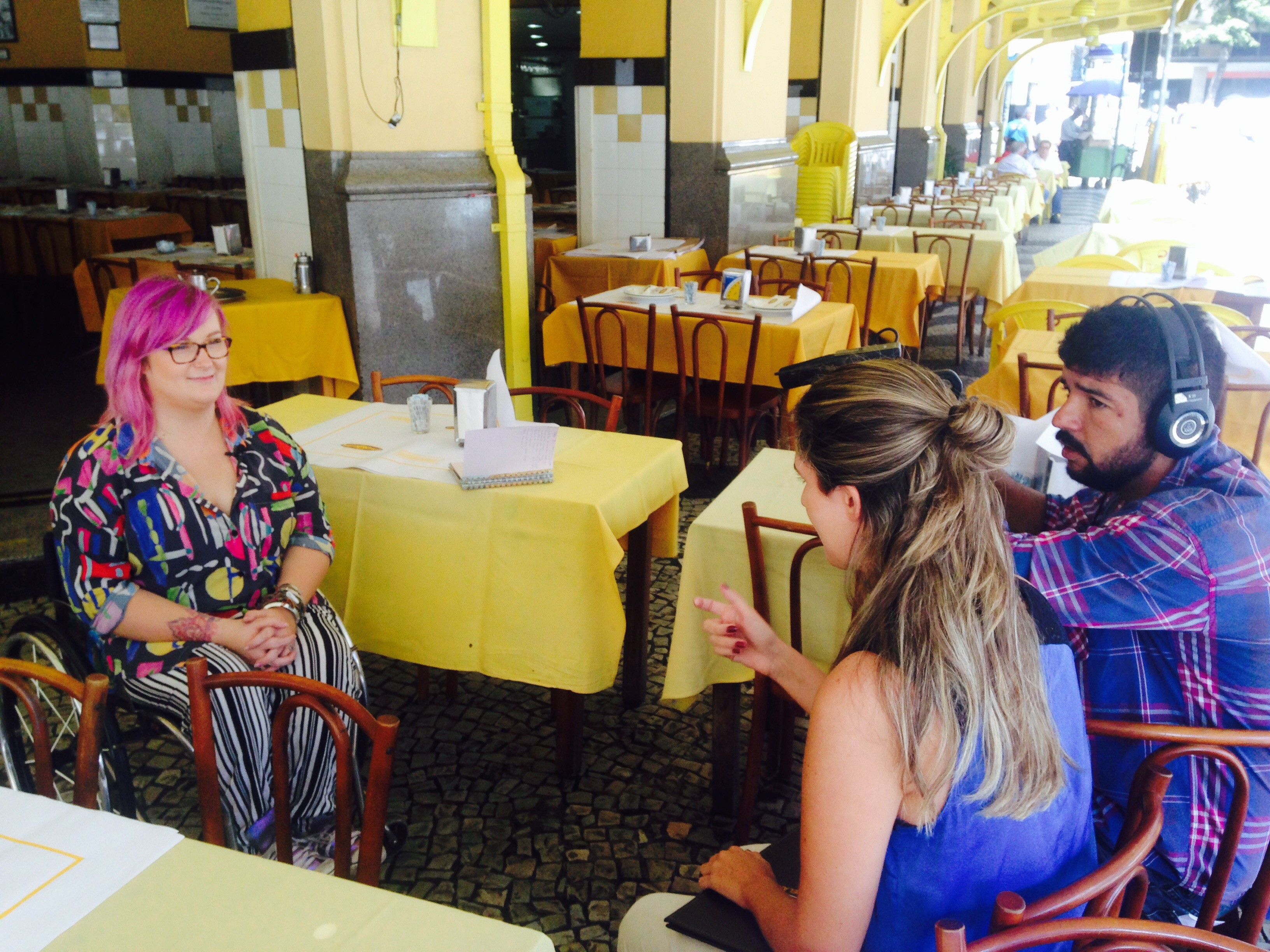 In terms of accessibility, we had no problem within the establishments themselves, and in fact, the majority of the staff were kind and attentive when asked for help. Our main obstacle, however, was the mobility between the tourist points in the centre. The Pedras Portuguesas (mosaic-style stones) on the pavements are beautiful, but not practical for a wheelchair. The uneven roads, absence (in some places) of ramps and general lack of awareness of the problem were the biggest challenge. And don’t even think about going to the bathroom! The lack of accessible bathrooms in Rio’s centre is really something to think about.

Ahead of the Olympic Games, Rio de Janeiro is preparing to welcome many tourists with disabilities in September. In an interview with Emily, she told me what she thinks about Rio in terms of accessibility and gives her tips on what needs to be improved.

What are the main differences you’ve observed between public transport in the UK and Brazil?

Accessibility and reliability.  The metro in Rio is 100% accessible for wheelchair users, but equipment is sometimes out of order and this can make travel tough.  I’m ashamed to say that the London Underground is still only approximately 30% accessible, which is a real shame.  However, the stations that are accessible are reliably so. It seems easier to grab a taxi ride in Rio, but the London buses are particularly great, with all of them being accessible for me.

How much does a lack of Portuguese affect your ability to travel around here in Rio?

I really wish I spoke more Portuguese, it’s a beautiful language! When staying in the south zone, it’s easy to become lazy with English as many tourist attraction and shop staff speak English well.  It’s important to know enough of the language to direct a taxi driver and order a meal – especially if you want to go further north and experience the ‘real’ Rio, which you should! I always write the addresses of my destinations down, just in case my pronunciation isn’t very good!

What are taxi drivers like here in Rio – do they help?

I must admit, I’ve had nothing but good experiences from the drivers here, they’ve always stopped for me, pulled onto the pavement where possible for ease of access and help me and my wheelchair get in.  The only problem is, there’s often gas canisters in the boot, meaning my chair has to be placed in the passenger seat! For people with power chairs that are unable to fold up or be lifted, a fleet of 50 specially adapted taxis exist, with built in ramps and mechanics to enable anyone to travel whilst staying in their chairs.  I hope this number increases before the Games!

How aware do you think Cariocas (people from Rio) are regarding accessibility in the city?

I think many know that Rio isn’t the most accessible place in the world! Cariocas, however, are some of the friendliest people I’ve ever met, and they’re always willing to lend a hand. If I’m struggling to get around, I rarely have to wait longer than 10 seconds for someone to notice and offer help.  That’s probably the thing I love the most about Rio – the people.

Are the beaches accessible here in Rio?

People with disabilities may struggle on the beaches themselves on a daily basis, but there are many activities that are brilliantly accessible, especially on weekends.  The ‘Praia Para Todos’ initiative in Copacabana and Barra enables the beaches to become more accessible with portable ramps and tracks for all users.  There are portable accessible toilets, too! AdaptSurf in Leblon also provides adapted surfing lessons and provides beach wheelchairs – so cool! Also, head to Praia Vermelha on Sundays and listen to the amazing jazz band on the promenade. All accessible! 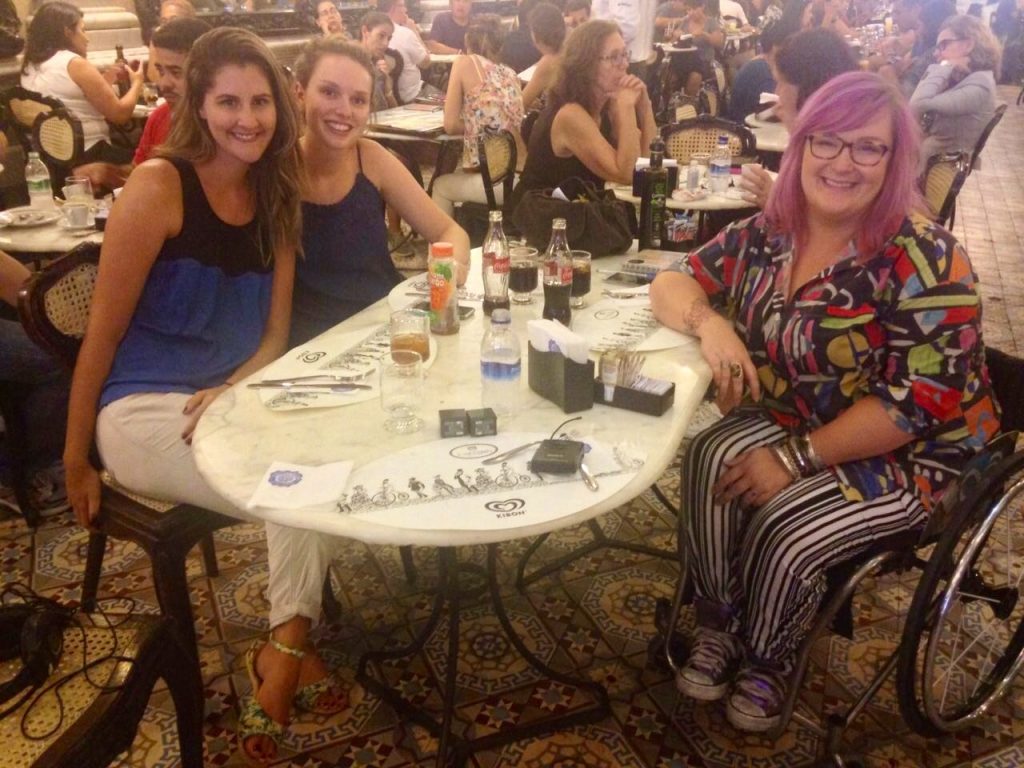 What main improvements do you think need to be made regarding accessibility in Rio?

Simply put, I think it’s amazing that so many museums, parks and centres have now considered accessibility and implemented equipments to encourage visitors with disabilities.  However, getting to and from these accessible things is still tough without assistance or a lot of patience and determination.  Pavements are still so difficult to wheel down, and I can imagine that difficulty is also felt by those who are visually impaired.  These pavements rarely have curbs, especially in Centro, making a taxi the only form of reliable transport a lot of the time, as it is the only one that will deliver you from door to door.  If this improved, I think Rio would become much more welcoming to people with disabilities. I’d also like to see more equipment for people who are hard of hearing or deaf, such as interpreters at events, text telephones, vibrating alarm clocks and hearing loops.  That’d be great!

The reason I found this subject so interesting is because my second cousin is a Paralympic athlete. Tom Aggar is a rower, who competes in the ASM1x category, which means using just his arms and shoulders. With 4 world titles under his belt, including a gold at Beijing 2008, he is preparing for Rio 2016. As we were chatting about this, he brought up a very interesting point, in that wheelchair users can have different levels of ability, depending on age and fitness. What can be a challenge for one person, could be just inconvenient for someone else. Here, Tom shares his thoughts on accessibility in Rio, from an athlete’s point of view: 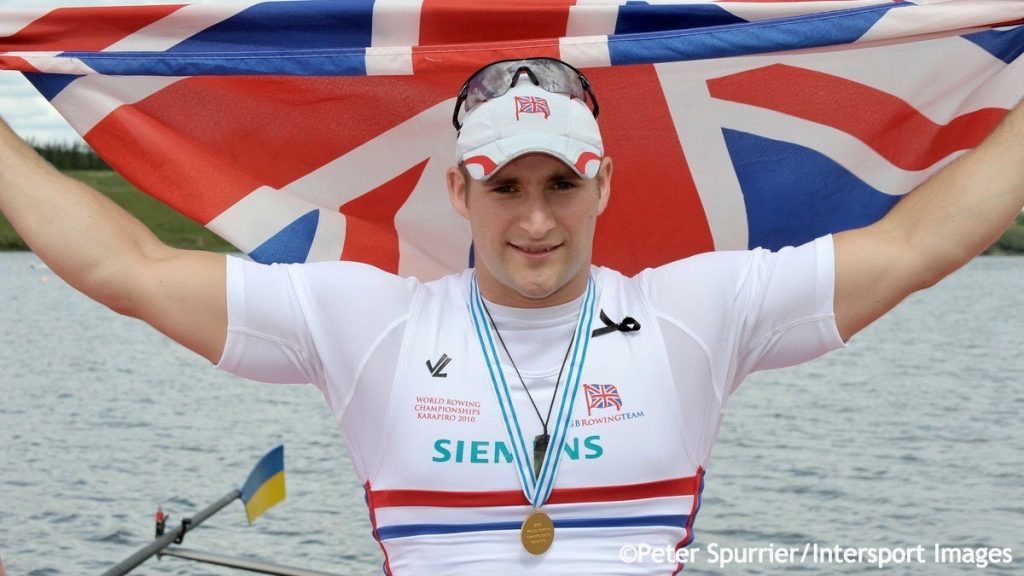 What were your impressions of accessibility in Rio de Janeiro when you visited for the first time?

My first and only visit to Rio so far was for 4 days, a year ahead of the Paralympic Games. On the whole I found Rio fairly accessible and had no major issues getting around the city. Due to the nature of the visit we were there to see the main competition venues which were naturally very accessible. The only issue I had was that a lot of the streets are cobbled and there weren’t always drop curbs so it was slightly more challenging than I was used to as a chair user.

How have you found the variation of accessibility standards from country to country throughout your travels whilst competing?

The majority of the competitions I have been to have been in developed countries, and for the most part the competition venues and locations are very accessible. There are always small challenges and differences between countries and even towns/cities in those countries. Banyoles in Spain, for example, where we usually head to on a training camp is on the whole fairly accessible. However the town was designed with very narrow pavements in places so I sometimes find myself in the road when heading into town. The access around places further afield such as Beijing was also fine on the whole, however it was virtually impossible trying to find an accessible toilet whilst out and about!

Is there anything you would particularly like to see improve in Rio ahead of the Paralympics, compared to London 2012 and Beijing 2008?

I think the design and layout of the village in Rio will surpass those in both Beijing and London, however one big difference I was aware of during my time there was the variability of the pavement. In places there were large cracks and areas where the pavement had become excessively damaged to the point were navigating using a chair, even with good chair skills was a challenge. My time in Rio was an eye opener. The club we trained at whilst there is home to many of the Rio Para-rowers. During my stay I was told by their coach that some of the rowers travel from far to train at the centre and due to the rain and landslides it can take them hours and at times they can be stuck at home, so the city has many challenges. However, for me the pavements in and around the centre are one area where the city’s accessibility could be improved hugely.

To read Sophie‘s original article (in Portuguese) and watch the video with Emily Yates, click on the link here: http://blogs.oglobo.globo.com/britanioca/post/acessibilidade-no-rio-de-janeiro-de-olho-na-paralimpiada-de-2016.html?utm_source=Facebook&utm_medium=Social&utm_campaign=O+Globo