Written by BristoLatino
Posted on November 24, 2015

BristoLatino sports editor Will Sansom ponders on the evolution of Brazilian footballing style, asking what defines the country’s current generation of players.

Brazil’s opening game of the 2002 World Cup was against Turkey. They won 2-1. Ronaldinho, Rivaldo and the original Ronaldo started that game. In 2014, Brazil beat Croatia 3-1. Leading the attack was Neymar, Hulk and Fred.

Very rarely will we see a trio as talented and aesthetically pleasing as the three R’s of 2002. They possessed audacious skill and clinical finishing in equal measure.  Ronaldinho’s free kick, which left David Seaman helplessly backtracking towards his own goal line, still gives me nightmares. These players were capable of the extraordinary.  The team also contained experienced defenders Lucio and Cafu, with the canny Gilberto Silva marshalling midfield. Their discipline helped balance the team and allowed the three attacking stars to ensure that their quality shone in the final third. Brazil beat Germany in the final 2-0, with both goals scored by Ronaldo.

The attack in 2014’s World Cup was less potent by some distance. Neymar is an exceptional player (despite the musings of Burnley midfielder Joey Barton, who in 2013 described the Brazilian as “brilliant on the old YouTube, cat p*** in reality”), and encompasses all the characteristics we associate with Brazilian football. He can beat a man, has an eye for goal and possesses the logic-defying skill that the attack of 2002 had in abundance. 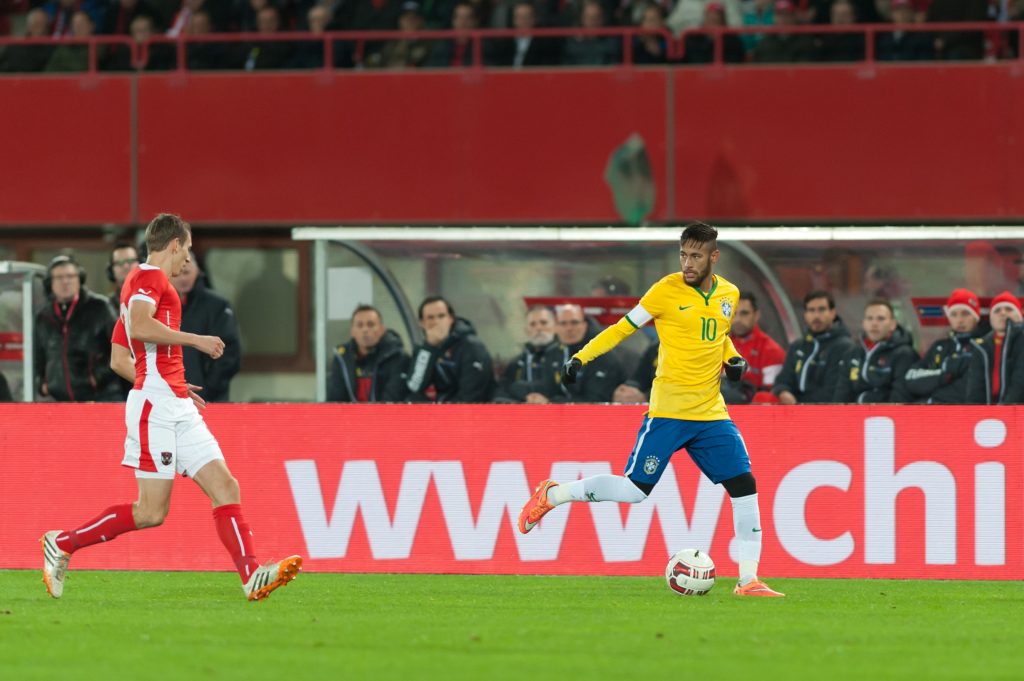 Fred, a player far removed from the archetypal Brazilian model, makes football look like hard work. He now plays for Fluminense in the Brazilian Serie A, and scored a respectable eight goals last season. It would be cruel to compare him to Ronaldo, a player who scored 62 goals in 98 appearances for his country, as Fred’s work rate is commendable in itself and he possesses an aerial presence. Hulk, who played on the right wing is somewhat of an anomaly. Like his namesake, he stands out for his strength; his style is aggressive and direct.

The 2002 World Cup team was a vintage one. Comparing them to the current outfit is unfair as very few teams could match up to their quality. However, I do wonder: is there any trend in the type of attacking footballers Brazil now produces? Disregarding Neymar, are Brazilian footballers now identifying themselves as hard-working, aggressive players who work consistently over 90 minutes, as opposed to those able to change the game with an individual moment of magic? This is not to say that the three R’s of 2002 did not work hard, it’s just that their effort was mostly saved for trying to make an impact in attacking positions, instead of expending energy in tracking runners, for example.

If such a trend exists, Hulk embodies it. Somewhat of a footballing nomad, after just two appearances for Vitoria in Brazil, he went to play in Japan. His career then progressed to Portugal before moving to Russian club Zenit St. Petersburg for 60 million euros. Hulk has played in such a contrasting variety of leagues that it is only natural that his style of play would have adapted and developed within each country.

This is not a phenomenon singular to Hulk. Over the last few years, more and more Brazilian footballers have been leaving Brazil to earn a living elsewhere. The money in European football is often the primary reason for this exodus, as players understandably emigrate for financial gains. Consequently, the country’s best players are signed by big European clubs after only a few appearances in their domestic league. Less talented players go to smaller teams, many in Eastern Europe, and attempt to forge a career there. Willian, currently playing for relegation strugglers Chelsea, moved after 16 appearances for Brazilian team Corinthians to the Ukraine.

Neymar is an exception, as he amassed 103 games for Santos before signing for current European champions Barcelona. He was fortunate to be a star of the Brazilian league at a very young age, allowing him to spurn the temptations of Europe for a few years. This perhaps explains why Neymar exhibits characteristics of the quintessential Brazilian footballer, while many other players are hybrids, having developed as players in a wide-range of different leagues and environments. Hulk is by no means a bad player, he just greatly differs from the Brazilian stars I grew up watching in 2002.

It is inevitable that Brazilian players will continue to follow potential riches across the globe. Brazilian football, especially the domestic game, does not have the resources or organization to match the riches of Europe. Does this migration of Brazilian players mean that the tradition of expressive, exciting footballers in the mould of Pele, Zico, Socrates, Ronaldinho and Ronaldo will eventually die out?

After watching Phillipe Coutinho and Willian light up the Premiership in recent weeks, I would argue that the Brazilian flair player still exists. Yet while Coutinho and Willian are very good players, there is something different about Neymar (any nonbelievers should see his recent volleyed finished against Villareal). Perhaps, as mentioned, this is because Neymar was allowed to develop his individual game at Santos- where he was the undoubted star- instead of having to adapt to more complex tactical systems in Europe. Unlike many of his contemporaries, he was able to perfect his audacious dribbling technique, as opposed to worrying about what would happen should he lose possession.

We were lucky in 2002 to witness Ronaldinho, Ronaldo and Rivaldo, three players who share a freakish level of ability, play in the same team. Skip forward to 2014 and Brazil are crashing out of the World Cup after a humiliating 8-1 defeat to Germany. Brazil is still producing talented footballers, Neymar and his contemporaries are proof of this. It is just unfortunate that they do not match the audacious brilliance displayed by the class of 2002. Brazilian football fans must be hoping that the current crop of talent develops over the next few years and can perhaps start to reach the heights of previous generations. There are two years before the next World Cup (and if England perform to expectation and fail to make it out of the group stages), I for one would be happy to see the iconic yellow shirt lifting the trophy once more.