Bomba Estéreo have exploded (pardon the pun) in the past few years, one of the only contemporary Colombian acts to reach such international acclaim. Rebecca Wilson charts their rise to success, and delves into their personal passions and influences.

A colonial church and misty mountains. A brunette in a gold jacket enters the frame and descends the grey steps of Montserrate, a pink scarf flung around her neck and a crochet flower in her hair. The platform is faintly lit by floodlights and, of course, high-vis security men are present. Like a girl dressed up in her mother’s heels, she approaches the band calmly, playing next to a stone wall, and takes a breath as she looks over the city below them. She is fearless and innocent like a rebellious child. The camera is hand held; it is personal and weaves between the band members as if pondering each one. Much of the video is out-of-focus, mirroring the obscured mountains in the mist and the silhouettes of the musicians against the backdrop of Bogotá. “Solo pido un espacio pa’ respirar” (All I ask for is some space to breathe), she sings. 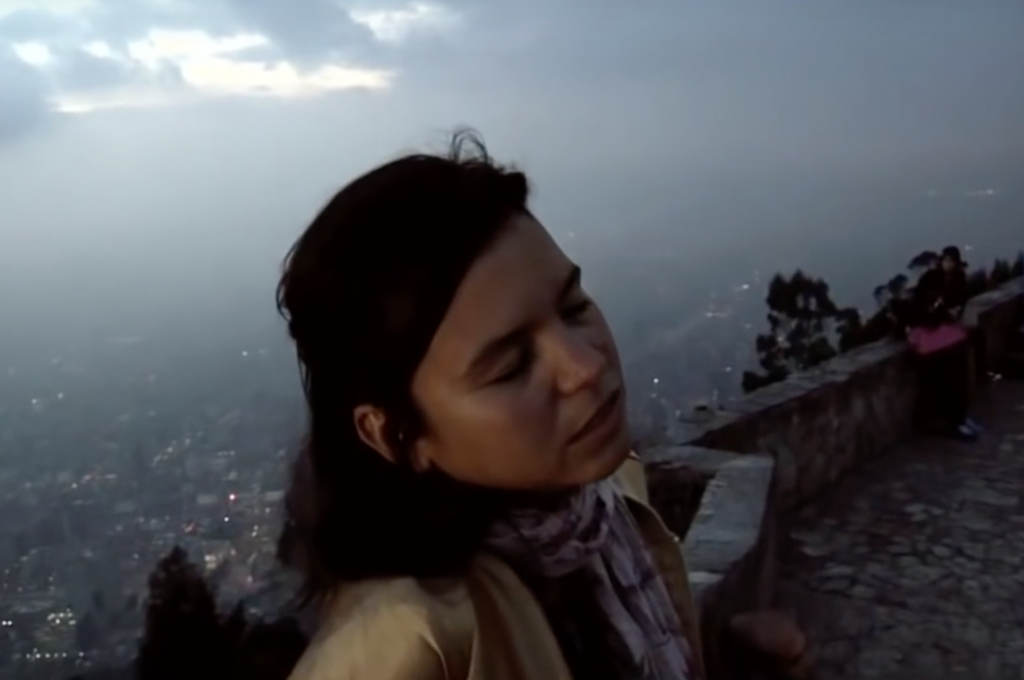 Bomba Estéreo are a psychedelic Cumbia band from Colombia. They combine traditional Caribbean rhythms with electronic music and raspy, childlike vocals, and some say they have “reinvented Cumbia”. Lead singer Liliana Samuet is an eccentric, rebellious fashionista who, back in 2005, was invited by Simón Mejía to sing on Bomba Estereo’s track Huepaje. Soon after, Liliana joined Simón, Kike Egurrola and Julián Salazar (who is also part of tribal techno band, Mitú) in Bogotá, as the singer for Bomba Estéro. She describes the grouping as “mágico, puro destino” (magic, pure destiny): exactly what one another were looking for.

They were chosen as ‘Best New Artist’ by iTunes Latin America 2010, they feature in the soundtracks of FIFA and Limitless, have played in 27 different countries, in heavy storms and rain and at some major festivals including Glastonbury and Coachella, yet Liliana believes festivals are overrated. According to her, small, intimate gigs are just as enjoyable, that each show has its own energy and enchantment. Mejía agrees, describing how their shows are an exchange of energies with the audience, far from being a one-way performance.

At first, they weren’t well-received in Colombia, where, according to Mejía, foreign music is valued above the rest. The public thought it wasn’t cool because it was Colombian, until Fuego (featured on the 2010 FIFA soundtrack) became popular. Mejía describes their inclusion on the game’s soundtrack as a great opportunity, given the love for football that exists in Latin America and worldwide. While fellow Colombians started to pay attention to music coming out of their own country, for international audiences Bomba Estéreo provided an interesting new sound. Nonetheless, the rise to recognition was slow, and the band gained popularity only very gradually. Now it is a different story: Bomba Estéreo’s most recent release Fiesta (Remix) features Hollywood actor and rapper Will Smith, and has over 2 million hits on Youtube.

Mejía describes how Latin music is now much more ample, more universal, and contains global sounds. Colombia is a fusion of cultures, of which African music plays a fundamental part. Essentially, the band make music to dance to, but they also incorporate melancholic lyrics of ‘desamor’. Mejia has said that, as Colombians, they can dance through the sadness.

The surprising sadness that permeates Bomba’s dance music has a personal resonance for lead singer Liliana. A costeña from (coastal) Santa Marta, she never studied music but holds that “en la costa todo el mundo canta” (by the coast, everybody sings). The suicide of Liliana’s boyfriend in 2014 has led her on a journey from extreme heartbreak to inner peace,  resulting in a deeper connection with her music. She says she often cries, and believes that weeping, just like laughing, is sacred. It cleanses the soul, she says, as “when we cry, we liberate many feelings and tensions”. This catharsis is not new to Liliana, as since childhood she has welcomed her tears, and this ritualistic crying is apparent in her emotive singing.

Liliana and Simón in 2015. Photo: Wikicommons

Simón Mejia, (the founder and guitarist of Bomba Estéro whose musical ventures include a Metallica cover band), assures us that the power of expression is much stronger than that of commercialisation, and that if you’re sincere with your art, it will take you far. He collects matchboxes and vinyls from each country he visits (he says he spends over half the year travelling).

Mejía describes Bomba Estéreo as “global music”: coastal, tropical, with elements of reggae, dub and even rock. The name ‘Bomba Estéreo’ originates from Colombian sound system culture. The sound systems are often named with couplings, an example being ‘rey estéro’ (stereo king). With Bomba’s eclectic mix of sounds and fitting with this street party tradition, stereo bomb seemed the perfect name for them. Bomba are currently touring the US, but with enough interest, there is a good chance we could get them back to the UK.