Love and loathing in Buenos Aires

Written by BristoLatino
Posted on February 4, 2016

Whenever Boca Juniors play River Plate the streets are empty. There is little traffic and shops remain closed for the afternoon. Football fans huddle together indoors to watch the two biggest teams in Argentina compete for bragging rights in a match known as the superclasico. River and Boca are both from Buenos Aires, and the capital is understandably paralyzed by the match; however, support for these teams emanates throughout the whole of Argentina. Within every city and province both teams garner a large group of diehard fans, whose fundamentalist devotion can be heard while walking through the empty streets on match day, for every goal scored creates a rumbling of cheering and shouting which echoes the atmosphere of the stadium.

That a match happening in a poor district in Buenos Aires, watched by only 40,000 spectators, creates a wave of sound across the country demonstrates how deep-rooted football and its rivalries are in Argentinian culture. The wild celebrations of the winning teams, as well as the state of mourning undergone by the losers, further shows the obsessive love much of Argentina has for the beautiful game. In Córdoba, where I spent my year abroad, fans of the winning team would set off fireworks throughout the night, as if at a wedding or New Year’s party.

This passion, which divides families and friends groups, can on occasion spiral out of control. Friendly rivalry can turn into outright hatred and violence. Although both teams have supporters from all social backgrounds, there is a perceived class difference between the two teams. Boca and River were both founded five years apart in the port area of Buenos Aires known as Boca, but River Plate moved to the wealthier district of La Núñez in 1925. For this reason, River are referred to as Los Millionarios (the millionaires).

River Plate in 1952, who won the Primera División that year 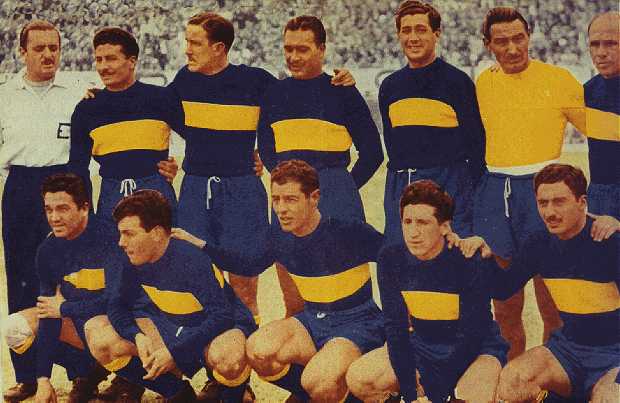 Tension between the two sets of fans often reaches breaking point, a fact not helped by the actions of some of the players. In 2004, Carlos Tevez was sent off for Boca in a superclasico after scoring a goal and celebrating by doing a chicken dance. Tevez was referring to the long running joke that River are a team lacking guts and who choke in important matches. The referee promptly sent him off on the grounds of inciting violence amongst the supporters. Such celebrations may seem harmless, but placed into the context of the events of last year, where Boca fans jumped fences to pepper spray River players as they were emerging for the second half, there is a the chance fans’ passion may overspill into something more dangerous.

Unfortunately, the superclasico has been increasingly marred by violence in recent years, both off and on the pitch. This said, some of the best atmospheres in world football have been produced by these very same fans. The extent of the support for these clubs, which spreads from Buenos Aires to every corner of Argentina, perhaps means that the occasional ugly incident is unavoidable- with emotion running so high, there is always a chance some unruly supporters may go too far.

Suffice to say, events such as these manage to find their way into football stadia across the globe, not just in Argentina. While violence is a symptom of football, seeing the passion of both Boca and River fans in the stadium and the streets never failed to remind me that, despite occasional problems, football is a cause for celebration. Just see fans of Rosario Central if in any doubt.