FLAWA festival seeks to promote the visibility of Latin American women in the UK arts scene and beyond. Last week at FLAWA’s panel discussion, the spotlight was on women in the music industry. BristoLatino’s Rebecca Wilson reports.

Female Latin American musicians are underrepresented in the UK. This was the first statement made at FLAWA‘s Women in Music panel last week at King’s College, London.

The panelists, who each specialise in a different sector of the industry, unanimously agreed that female Latin American musicians are underestimated until they prove their talent. ‘For men, it’s the opposite,’ explains Eliane Correa, a Cuban-Argentinian musician, composer and musical director. This bias perpetuates a lack of female musicians in the industry. ‘As a producer, the gap is even bigger’, she elaborated, ‘1 in 49 music producers are women![1]I’m pretty angry about this.’

Eliane related how ‘almost all of what I play is in some way Latin music, and often I’m the only female in the band.’  Eliane is often asked ‘What do you sing?’ When she informs them that she is in fact a pianist, the general response is ‘but do you read notes?’ – which of course, Eliane, who is currently performing with The World of Hans Zimmer orchestra, scoffs at.

One of the main aims of the Festival of Latin American Women in Arts is to change this very stance. It runs deep, too. As a female music lover who  used to sing and supports countless female musicians as a spectator, I still found myself in awe at the tight arrangements, energetic percussion and evocative lyrics of Karamba, a Barcelona-based all-female band who lit up the opening night of FLAWA. Why was I surprised that women were playing the bass and the drums so well? 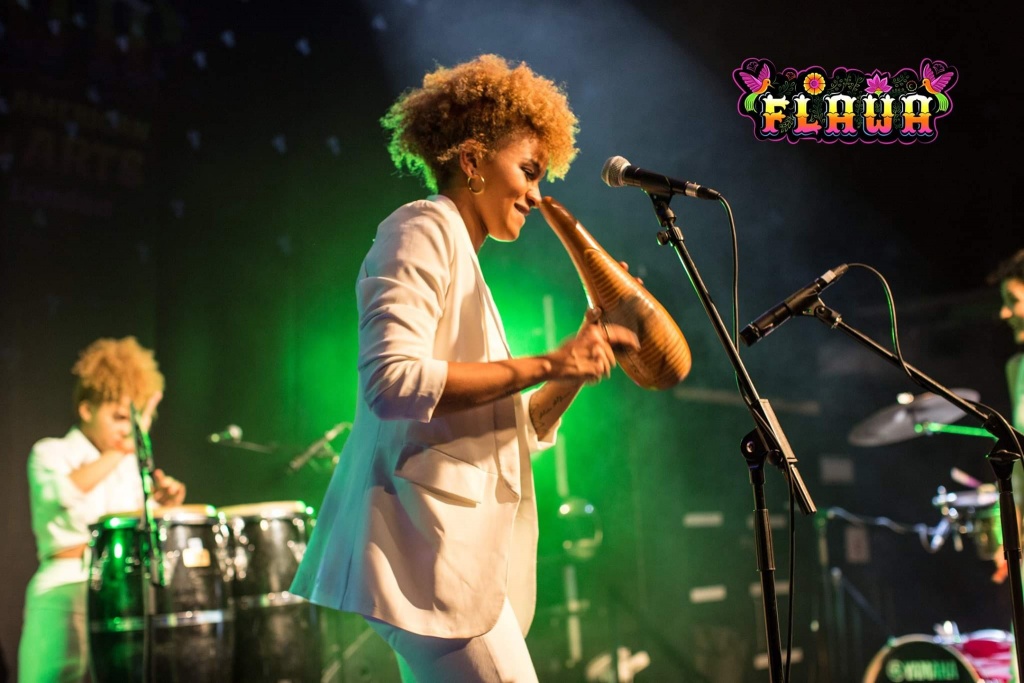 Just as I overlooked the value and talent of female musicians, the panelists discussed overlooking the national music of their native countries. Paula Durán, a music publisher at Soundway Records, which specialises in African, Caribbean, Latin, and Asian music, grew up listening to Duran Duran and Massive Attack, instead of traditional Latin music such as the ‘Colombia!’ compilation Paula’s father encouraged her to listen to. When Paula re-discovered her father’s beloved compilation, she was surprised to find that it was two Brits who had put it together. ‘They had an appreciation of my culture that I didn’t even share myself’, she told us. Paula instantly decided that she would get a job with them, and she went on to co-found Soundway Publishing with Miles Cleret, the label owner of her father’s CD. ‘I began to re-love my own music thanks to their initiative. Sometimes it takes looking through someone else’s eyes to see something great.’

Fabiola Morales, a music manager and promoter who chaired the panel, agreed: ‘Sometimes we don’t see the full value of our own culture, and it takes someone from another culture to reawaken this, to remind us, and point it out with fresh eyes’. She thanked initiatives such as FLAWA and Movimientos who book a wealth of Latin bands to play in the UK.

Of course, there is a downside. Maria Alejandra Rivas, a cultural arts director, programmer and PR manager, worked with a British University who wanted to teach Venezuelan folk music. She suggested a concert with one of the best cuatro musicians, so that the British students could become familiar with the small guitar that characterises much of Venezuela’s traditional music. Although they loved the exotic-sounding small, twangy guitar, they wouldn’t teach the instrument, as ‘there are no cuatro players around here’. Maria, who brought  Venezuelan music to the UK and Spain, found that some institutions don’t want to reach real Latin culture. They are unaware of the cultural quirks and emergent genres, especially of contemporary Latin music. If people aren’t prepared to book artists and invite maestros of different cultures to the UK and Spain, how is the public ever going to understand the musical heritage of different countries? The only cuatro around is one in a cabinet in London’s Horniman Museum!

Eliane agreed that the non-Latin public receive a ‘packaged version’ of certain Latin cultures. ‘We can’t deny that most of it has been whitewashed in the process of arriving here’, she stated. ‘Buena Vista Social Club put Cuban music on the map, you couldn’t simply stumble upon it before Buena Vista. But the album and the film were produced by foreigners. The music was collected, packaged and made palatable for other cultures.’ Seen as ‘traditional music’, the retro-sounding, cigar-smoking band emanated an image of authentic Cuba, which in reality was tourist art. 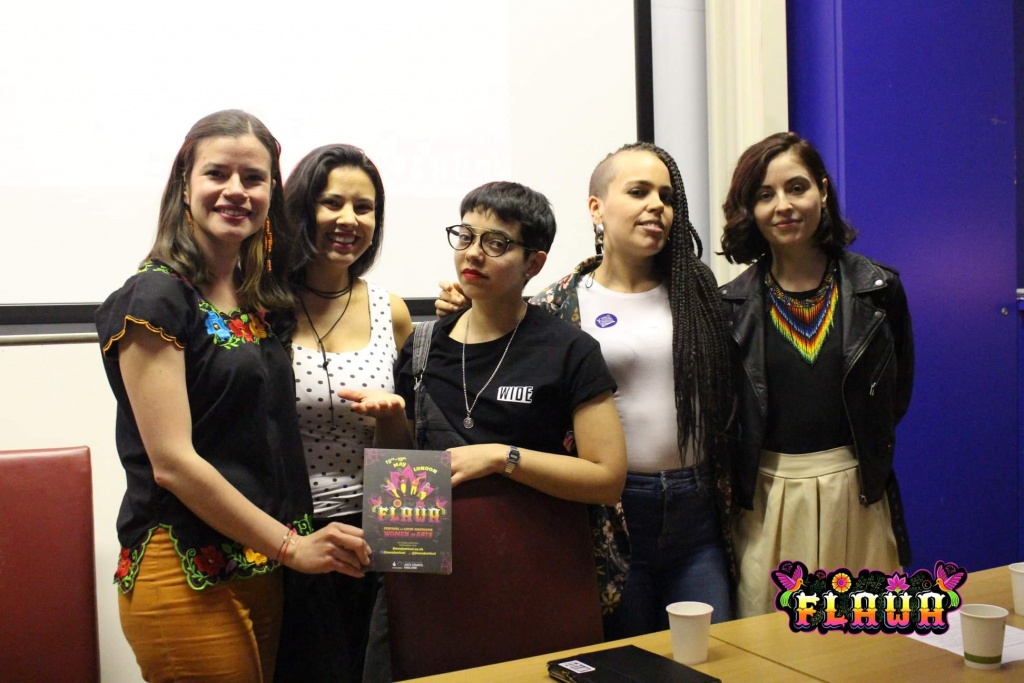 The panelists at FLAWA’s Women in Music talk at King’s College, London

Timba was a type of popular, modern black dance music in 1990s Cuba, contemporary to Buena Vista Social Club. It reflected the political changes of the time, as the country lost economic support from the USSR. Timba did not conform to Western ideas of “world music” and it was often censored by the state for its political commentary. The Cuban government denigrated timba music, and it was not marketed to foreign audiences.

Nikols Latuff directs WIDE global radio, which aims to showcase new trends in underground electronic music from Latin America and around the world. She is committed to increasing the visibility of Latin American artists and subjects of its historical heritage all over the world, ‘be it the uprooted voices of the diaspora, the re-envisioners of the Afro-Caribbean, (or) the cosmopolitan producers of the latest generations.’

Nikols is convinced that her job applications in the UK are racially profiled like musical trends. When ticking the ‘ethnic other’ box on job applications and disclosing her Venezuelan heritage, she believes employers hold the stereotyped idea that she is applying for the studio ‘cleaning lady’ position, rather than that of a producer. ‘But the ‘cleaning gentleman’ stereotype does not exist,’ Nikols highlighted. The fact that Latin Americans are not a recognised minority in the UK cropped up in each activity during the festival, and hopefully FLAWA will raise awareness of the need to include the growing Latin American population in the UK census.

Nikols feels her 10 plus years of experience are secondary to her gender and nationality, which are steeped in prejudice in the UK. She finds that people are surprised when they find that she is intelligent and able to speak English. Maria Alejandra Rivas, who worked as cultural coordinator at London’s prestigious Bolivar Hall, alongside many other cultural managerial roles, finds that male employers are taken aback when she ‘proves’ her ability. Discussing leading a team in the workplace, Maria Alejandra raised the issue of balancing politeness, kindness and capability with the sternness required to avoid feeding into gender stereotypes. Paula Durán related her own experience of feeling the need to demonstrate more normatively ‘masculine’ qualities in order to earn respect in an authoritative role: ‘If not, you’re seen as the band mama, not the band manager’.

Another problem facing women in the music industry is commercialism dressed up as female appreciation. Nikols stressed: ‘People still go to see female DJs because they’re hot, and women get booked for gigs so that the event can be seen as a fashionably feminist night, without working towards lasting feminism.’

Much of what was covered in this discussion is relatable for women from other ‘minority’ cultures in the UK, and for all women in the music industry. ‘I have friends making music in Ghana, Nigeria, Lagos, cities in West Africa with money that are starting to create their own labels, but really at some point, you’ll hit a glass ceiling’, Eliane lamented. For this reason we need to support fellow female creators, and enter into discussions about the whitewashing of foreign music in the UK, and we need to educate institutions and open their eyes to new trends in music and culture. Moreover, we need to employ Latin American women, and respect and expect their expertise!

FLAWA gives a special thanks to Andres Fuentes and the King’s College Latin American Society for their collaboration in organising the event, which took place in Nash Lecture Theatre KCL on Thursday 16th May.

[1]From a 2012-2017 USC study of the major pop industry. Other alarming facts include that only 12% of songwriters are female and that 90.7% of Grammy nominees from 2013-2018 were male – and this is only covering gender inequality, let alone the lack of racial diversity in the industry.