The former Argentinian president, along with two associates, has been formally charged with corruption. BristoLatino’s Joe Brandon reports. 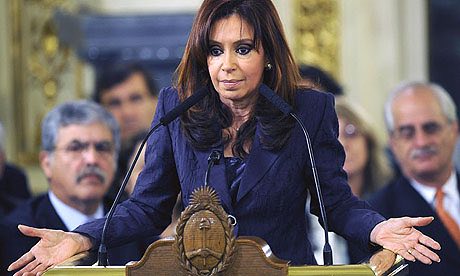 The court alleges that between 2003 and 2015 Kirchner’s government awarded a disproportionate amount of public works contracts to Austral Constructions, owned by Lázaro Báez, also named in the indictment.

Kirchner left office in December 2015 after completing her second term, with Mauricio Macri elected as her successor. Since stepping down, Kirchner has been the subject of a deep corruption investigation involving various members of her government and associates. On June 14th this year Mr. López was found throwing bags filled with £7.3 million in various currencies over the wall of a monastery, along with a number of expensive watches and a semi-automatic assault rifle. He was arrested on suspicion of money laundering. Mr. Báez was also arrested on money laundering charges on April 5th.

Kirchner is a divisive figure in Argentina, and her presidency was marked by scandal. A devotee of Peronismo, a brand of populism named after President Juan Domingo Perón, she has waged war against the media group Clarín, claiming it has a vicelike grip on the release of information in the country. She also faced off against international debt speculators, calling them “vultures” and refusing to pay the country’s debts. In January 2015 Alberto Nisman, a prosecutor who claimed to have evidence of Kirchner covering up Iranian involvement in the 1994 bombing of the Israeli embassy in Buenos Aires, was found shot dead in his apartment the night before he was due to give said evidence. His death remains unsolved.

The former president accuses Macri of launching a smear campaign against her. She tweeted:”Now they say our constitutional government was an illicit association. Will they also prosecute the 46% and the 54% that voted for us in 2007 and 2011? Illicit association is a legal concept that has been used by all dictatorships to persecute their political opponents”.