In the lead-up to International Women’s Day, also known as 8M in Colombia, Jessica Fortune looks at the history of the celebration, women’s rights in Colombia and the country’s feminist agenda today.

International Women’s Day is a focal point for women’s rights and gender equality, celebrated throughout the world. Its origins date back to 1909, when the Socialist Party of the USA organised a “National Woman’s Day”. In 1977 the UN officially declared March 8 as an annual celebration of womanhood, and today it marks an important date in the international feminist calendar for galvanising unified protest in demand for rights and equality.

In the last few years, 8M (8th March) celebrations across Latin America have seen people gather in the hundreds of thousands to demand women’s rights. Crowds are often tinted green by the pañuelo verde, the green scarf which symbolises the demand for reproductive rights, and vocalised in brave chants like Las Tesis’ popular performance piece ‘Un violador en tu camino’.

This fearless attitude and unceasing, organised manifestation undoubtedly contributed to the landmark decision made by Argentina’s National Congress in December 2020 to legalise abortion. Although over 97% of people of reproductive age in Latin America and the Caribbean live in countries with restrictive abortion laws, Argentina’s abortion bill has further motivated Latin American countries like Colombia to gain the right to abort and we expect this to be a key demand in this year’s protests. 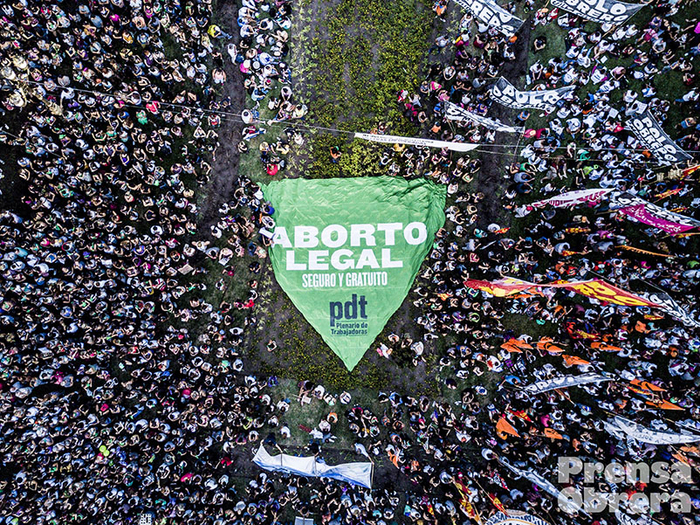 8M 2018, Buenos Aires, Argentina. At the end of 2020, Congress passed a bill legalising abortion in the country. Photo: Prensa Obrera

A quick feminist history of Colombia

In Colombia, the women’s movement started relatively late. It was not until the 1930s – a period of significant political change in Colombia – that the women’s movement managed to consolidate a feminist agenda in search of political rights for women. In 1930, a liberal government gained power for the first time in almost half a century and in the decade that followed, social attitudes began to shift as a feminist consciousness spread.

Like many feminist movements around the world, equality was at its heart and a 1934 saw women granted the right to study in higher education. But although though suffrage was the principal aim for the women’s organisations at the time, Colombia was the penultimate Latin American country to grant female suffrage, only doing so in 1957.

One of the most significant leaders in the Colombian feminist movement at this time was Ofelia Uribe de Acosta. In 1957, she wanted to make clear that the female suffrage achieved was thanks to the efforts and intelligence of the Colombian women themselves, and not the president who granted them the right.

The disproportionate effects of the armed conflict

When looking at the road to gender equality in Colombia, one must take into account the devastating effects of the civil armed conflict. Over the last 50 years, more than 8.8 million people have been registered as victims of the armed conflict. According to the UN Women Background Paper on ‘Gender and the Role of Women in the Colombian Peace Process’, women and girls are more likely than their male counterparts to be subjected to massive displacement, sexual violence, rape, forced labour, forced prostitution, forced abortions and enslavement. [1]

Of course, the systematic oppression of women in Colombia existed before this period of conflict, but it is widely accepted that war exacerbates pre-existing patterns of discrimination and violence against women. As a result, women have suffered disproportionate effects of the conflict and widespread discrimination.

The violence they have faced has only increased the need for a gender-based approach to the road to peace. Absolute security and positive peace cannot be achieved without gender justice and the empowerment of women, so the feminist movement in Colombia is vital for the future of the country and the women who inhabit it. 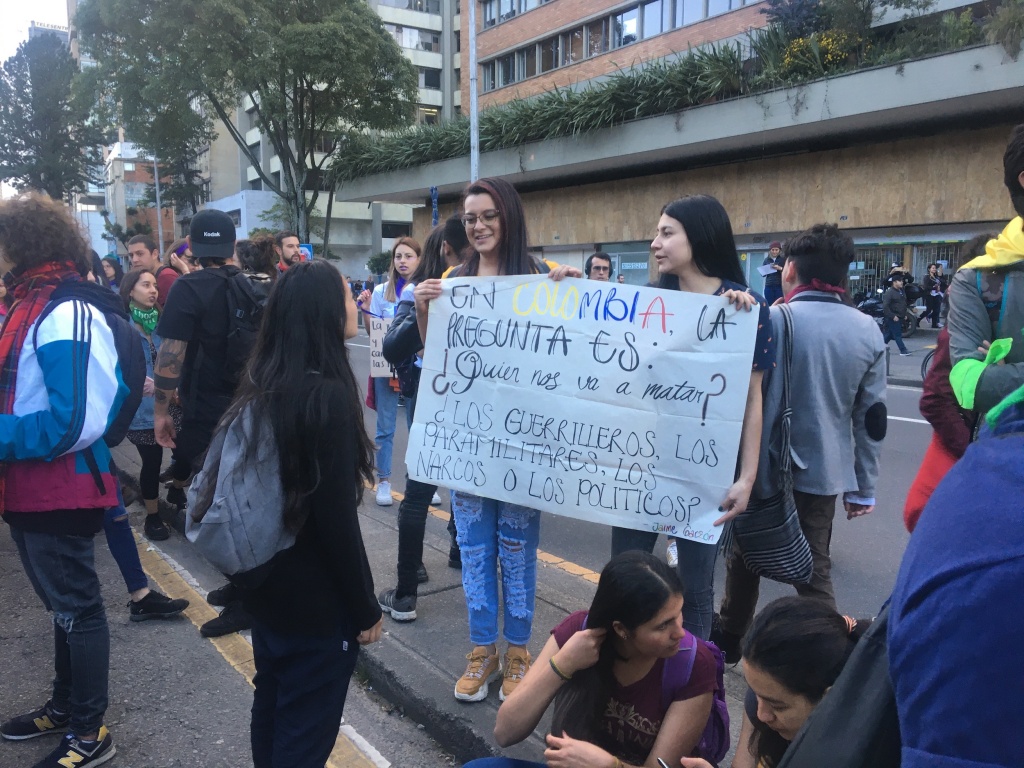 In Colombia, the question is who will kill us? The guerillas, the paramilitary, the drug lords, the politicians? Young women participate in a protest to raise awareness about the high rates of femicide in Colombia. Bogotá, 2019. Photo: Jessica Fortune

There is no doubt that the feminist progress that has been made in Colombia is largely down to the women that have fought to make themselves heard and create change. However, there are still many barriers inhibiting Colombian women from accessing their rights, including a culture of machismo, racism, informal working conditions, the armed conflict and the power of the Catholic Church.

In true grassroots fashion, many feminist groups have emerged in Colombia in recent years, such as Viejas Verdes, Siete Polas and Estamos Listas. These diverse organisations and feminist movements have successfully organised mass mobilisations, utilising social media to galvanise crowds.

Particularly in the capital city of Bogotá, mass mobilisations opposing violence against women and the alarming rates of femicide have taken place on many occasions. Over the last few years, national protests have simultaneously occurred across the country to denounce the corruption of the right-wing government and demand more rights for Colombia’s indigenous populations.

In 2019, the “Paro Nacional” (national strike) coincided with the International Day Against Violence Against Women. Young feminists took advantage of the rising momentum in the city to propel their movement further. The drive behind the national protests united with the feminist agenda to create a powerful and inspiring atmosphere.

For example, activists denounced the high rates of femicide in Colombia. This not only relates to domestic violence, but also to the assassination of countless female social leaders and human rights defenders. In 2019 especially, you could sense this multifaceted tension in the streets of Bogotá as the activists chanted in unison to show their opposition to intersectional injustice that women and men face in Colombia. 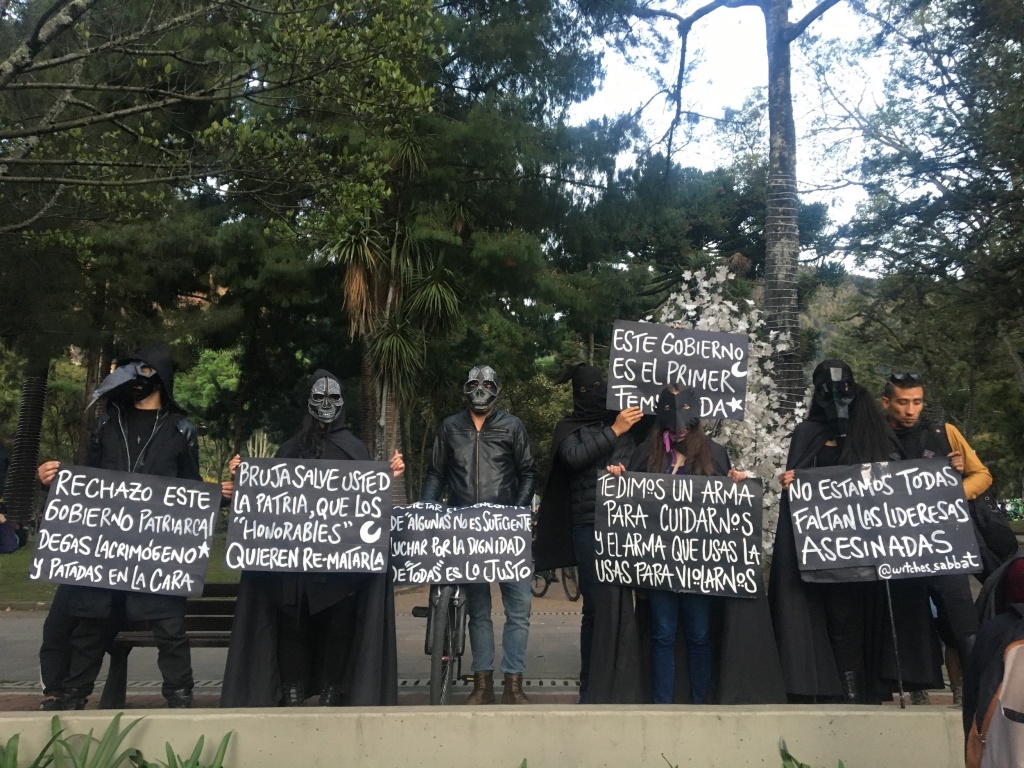 Another principal goal on the agenda for Colombian feminists is to make abortion completely legal and safe for all women. The ongoing struggle for more sexual and reproductive rights in Colombia is inextricably tied to country’s strong Catholic roots.

Although the Colombian constitutional court granted abortion in certain circumstances legal in 2006 (namely, when it saves the life of the mother, or preserves her physical or mental health- as is the case in Brazil, Chile, Mexico and Peru), this action was clearly not enough.

Thousands of illegal and unsafe abortions still occur every year. It is for this reason that pro-choice feminist organisations such as Viejas Verdes are at the forefront of collective action to call for women’s rights over their own bodies to be guaranteed in Colombia. 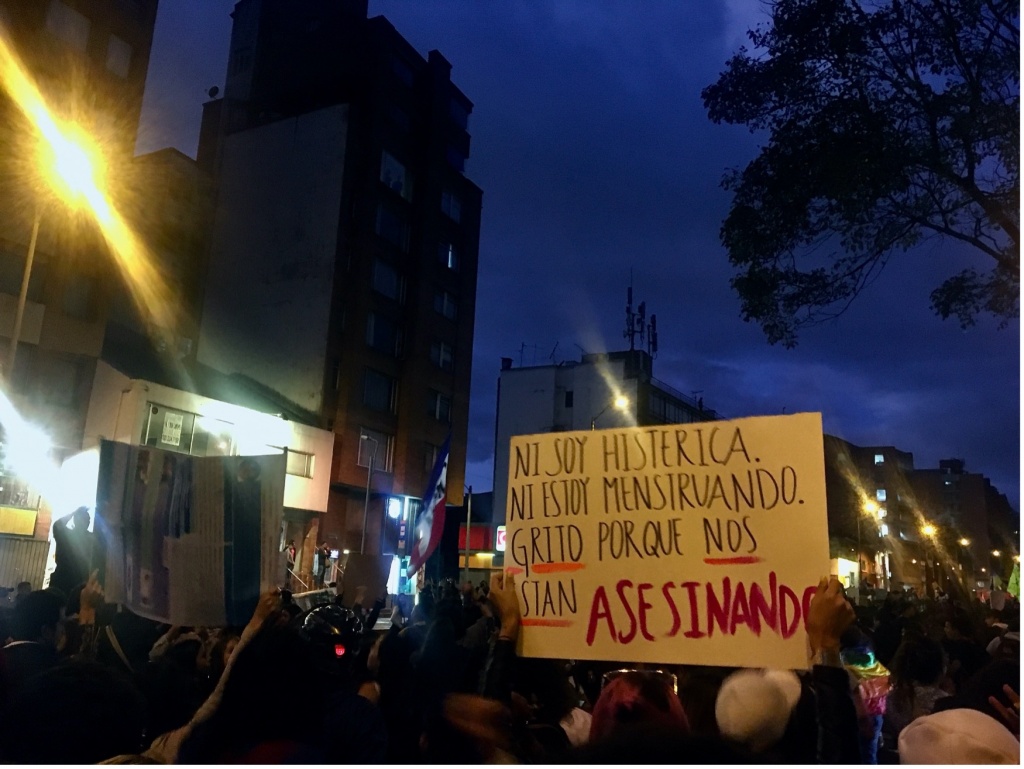 I’m not hysterical nor am I menstruating. I’m shouting because they are killing us. Bogotá, 2019. Photo: Jessica Fortune

For Colombian women, the struggle for equality in most aspects continues to be long and arduous. The brutal impacts of the armed conflict have shaped the country’s history and played a debilitating role on feminist progress in Colombia. With the peace process in their sights, the new generation are taking the ongoing feminist fight into their own hands.

It is clear that in the case of Colombia, the feminist fight cannot be disassociated from the ongoing struggle against violence and corruption in the country as a whole. However, as one of the protest signs reads, the activists are rejecting the ‘patriarchal government’ and combining their anti-corruption fight for justice with the fight for women’s rights and gender equality.

This year, on International Women’s day, the women of Colombia will once again fill the Plaza Bolivar in Bogotá and crowd the streets of many cities all over Colombia to raise their voices in the name of feminism. Although there is a lot to celebrate in terms of how far they have come from 1930, there is no doubt that supporters of the feminist movement in Colombia will need to continue with their hard work to create real lasting change.

In a country where women are frequent victims of a violent patriarchy, the only way to celebrate International Women’s Day in Colombia is to take to the streets and fight for change.