BristoLatino joint editor-in-chief Rosanna West tells us how one Bogotá-based dance school opened her up to salsa.

In an empty office on the busy Calle 85 in Colombia’s capital Bogotá, salsa teacher Jorge Orozco is demonstrating the art of what an English gentleman might describe as hip wiggling to two curious English girls.

During the economic boom of the last decade, nightlife options for foreigners have grown rapidly. Wander around Bogotá’s upmarket Zona Rosa neighbourhood and you’ll soon come across an Irish pub teeming with expats and pint glasses, or restaurants shamelessly charging you Parisian prices for not-quite-Parisian food. 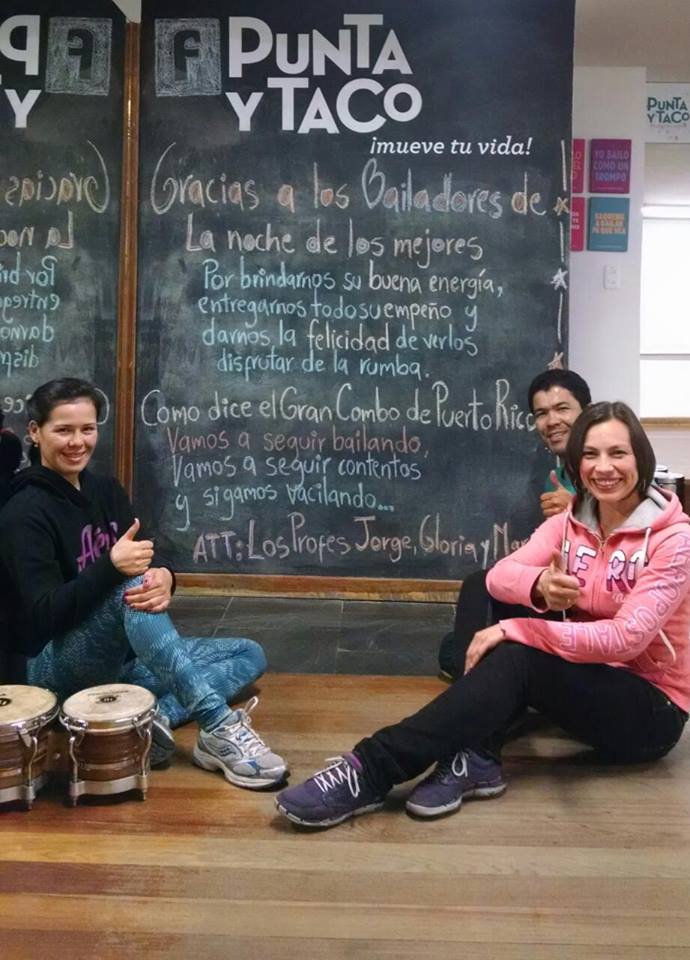 Marcela, Jorge and Gloria in the studio.

However, head downtown to a noisy salsa bar and you’ll find a rather different nightlife, revolving around dancing, not drinking. Any foreigners you find are usually propping up the bar or awkwardly nodding their heads and avoiding eye contact.

Jorge, and his sister Marcela, are out to change this. Their academy Punta y Taco has developed into the number one dancing destination for the expat community, 10 years after Jorge left his job as an electronics engineer in the town of Manizales to move eight hours east to Bogotá and turn his passion into a business.

The siblings targeted the influx of foreigners into Colombia, as an improved security situation and global commodity boom made the South American nation a popular place to live and do business.

At $30 per one hour private class, prices at Punta y Taco reflect the clientele of well-off Colombians and foreign embassy workers, English teachers and business owners. Yet awkward gringos – slang for North Americans but liberally used to describe all non-Latinos – attempting salsa is nothing new. What marks Punta y Taco’s success is their approach to a topic that, for all the modernisation of Colombia’s cities, remains a culture shock to many arriving from Europe and North America: gender relations.

When I landed in Bogotá, my proudly feminist stance was not going to allow me to participate in a dance that obliges women to be led by men at all times, as happens in salsa. Fortunately, I was dragged along to a class at Punta y Taco, which turns out to be one of a kind. 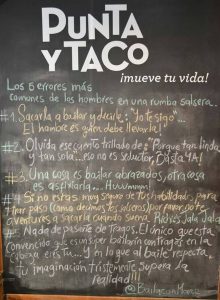 The 5 most common mistakes men make in a salsa club, according to Marcela.

Jorge and Marcela’s outlook allows a far more accessible introduction to salsa for foreigners than often daunting salsa clubs, where a woman never asks a man to dance, but if she refuses a dance is met with reproach.

“Dancing isn’t domination or submission, it’s a relationship of balance,” says Marcela. “A couple accompany each other, they give and receive and no one party is more relevant than the other.”

Jorge agrees, saying that “to limit oneself to only ‘leading’ or ‘following’ is to lose 50% of possibilities and sensations of dancing”.

Both admit that not all their peers share the idea of the equal importance of men and women in salsa, blaming ignorance of the true spirit and technique of the dance, as well as a certain playing up to Colombia’s macho reputation.

Jorge and Marcela’s approach worked for me, as I soon squared salsa with feminism and spent eight months at the school. Who knows, maybe soon the expats will be salsa-ing with Guinness in their hand at the Colombian Irish Pub?