If you’re a fan of King Krule, Mac DeMarco or Steve Lacy.. listen up! At first, Mexican surf-punk might sound like a random amalgamation of words. On closer look however, we see the genre makes a lot of sense. With the Pacific Coast and Baja Peninsula’s incredible surfing beaches, little towns and fishing villages populated by pro surfers, the relaxed surfer vibes seem to have produced a national interest in the happy subgenre of alternative rock. To name a few of these little towns – Puerto Escondido in Oaxaca (known for its barrels!!!), Troncones in Guerrero (a true former fishing village turned surfing hotspot), Sayulita (for loggers!) and San Miguel in Baja Norte (infamously a favoured destination of legendary guitarist Jim Morrison). The fuzztone distortion characteristic of the genre is not lacking in Mexican version of the genre, elements of surf-horror rock developing the genre into one perfectly suitable to the next Tarantino film. Often (and especially in the 70s/80s) the music was lyric-less, probably a key factor that abled the genre to reach both Spanish and English-speaking audiences. These bands style a punk garage attitude and do not go lightly on the reverb, creating groovy, wet guitar sounds and using heavy staccato picking to create a funky, enjoyable sound. This selection of Mexican surfy tunes will keep you happy during wintery library sessions, and have you dreaming of salty beach days down México way… 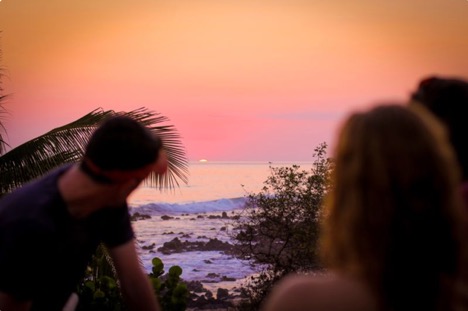 Kings of surf-punk, Mexican cult-band Lost Acapulco literally define the genre. In their videos, they often wear Hawaiian shirts and Lucha-libre masks, celebrating both the origins of surf (Hawaii) and their Mexican national identity. Their top listeners are all in México, so get ahead of the curve and bring up those listens from the U.K.

Señor Kino hail from Hermosillo in the northwestern state of Senora, México. Kino Bay is a perfect hang-out for chillers, boasting calm waves and warm waters.

For surf bands with a latin slant, these guys are your best bet. Their firm adherence to what surf-rock is, i.e. Dick Dale’s “Miserlou”, might be off-putting (layers on layers of staccato picking over reverb-ery guitar bits), but if you want a genuine introduction to instrumental surf-lounge rock as a genre genre, this is it (from Mexicans!).