Fundación Casa Wabi, a non-profit organisation located in the heart of Oaxaca, seeks to enrich the lives of its local communities by connecting them to international artists, opening up a space for communication and interaction. Founded on the philosophy of Wabi-sabi, Casi Wabi encourages its residents to question humanity’s relentless pursuit of perfection and rather focus on the beauty of death and decay to celebrate the transient nature of life. At a time where overconsumption and waste are at their peak, BristoLatino’s Tilly Compton spoke to Femke van Gemert, a recent resident of Casa Wabi who works with recycled textiles, to understand more about the foundation and get an insight into her personal experience there. 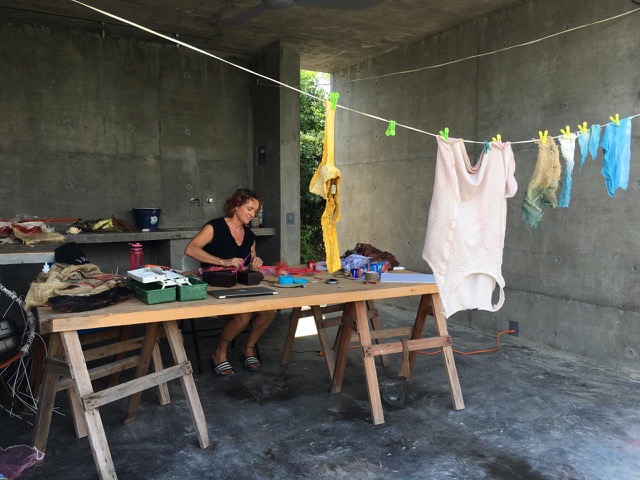 What triggered your interest in working with recycled materials?

It’s a long story! I’ll try and keep it brief. After working as a designer and trend forecaster for many years in the fashion industry, I felt the need for change. A growing awareness concerning overproduction, overconsumption and the enormous amounts of waste in the polluting fashion industry altered my relationship with textiles. This is what influenced my decision to only use second-hand materials that had already been worn, used, digested and discarded by society in all of my works.

In all my creations a certain mood laden with fragments of the former characteristics of the used textile pieces is still visible. While the scraps of textiles still hold the colour, material and texture of their former being, they no longer bear their values in status, money or brand. In commissioned work, clients donate their own discarded textiles, thus emotional involvement then becomes part of the process as well as the aesthetics of the work. It’s through this process that I can confront people about their waste.

Is there a common theme that runs through your work?

Yes, decay, natural ageing and the beauty of deterioration. Our obsession with perfection, things that are new and shiny, whether it is fashion, technology, or even immaterial things, such as ourselves and our bodies. But what really is perfection? Who determines it? What drives it? In nature, everything is always in a state of change; whether growing, evolving, decaying, dying – it’s a constant cycle. This is true to life and is a process that humans are constantly trying to avoid.

From all the waste we leave behind, I want to create things that have a natural, organic look and feel, reminding us of the beauty of organic processes. Alongside this is also the theme of ageing and the stages in my life as a woman; something that is more hidden in my work. 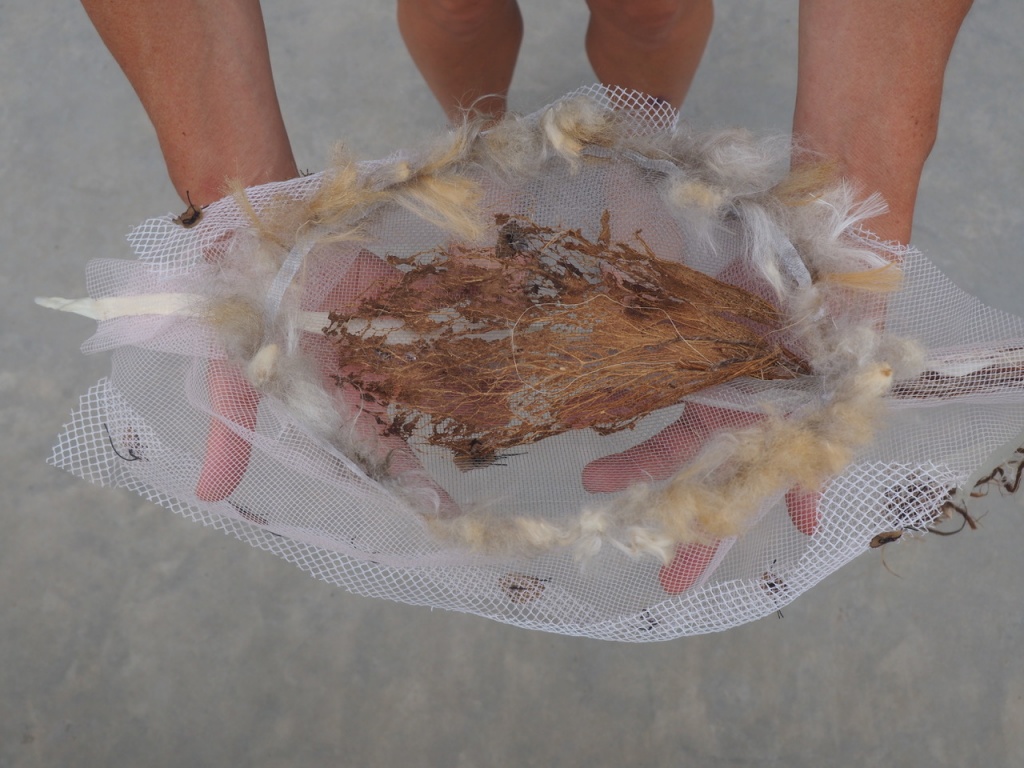 What attracted you to Casa Wabi, and could you tell us a bit about your experience there?

The focus of my work shares many visions with, and is strongly influenced by, the Wabi-sabi philosophy; a philosophy that is also shared with the Casa Wabi foundation. Other than this, (or perhaps because of this!) the place is just awesome. It’s breathtakingly beautiful. Situated in South of Oaxaca in Mexico on a coastline that’s surrounded by nature… this is what drew me in. I had been to Oaxaca before and loved returning to see how it had changed over the years. It is a very interesting place and the Casa Wabi premises have a lot of space to allow artists to create both big and experimental pieces.

I did a lot of research on dried, fallen parts of the Nopal cactus (also known as the “Prickly Pear” or Opuntia cacti) that were found scattered around its enormous garden. In dissecting them, I revealed their structure, discovering the many layers that form this succulent plant. This is what inspired me to make an installation that recreates these layers in various stages of decay, reflecting our life in the Anthropocene. During my stay, I conducted weekly beach clean-ups, and I used some of the plastic found in my installation.

All of the pieces I used in the installation looked very organic and natural, while all containing synthetic and plastic parts. That is exactly the point I wanted to make – we don’t see how nature is affected by our lifestyle choices and how they pollute our environment. The environment is a state of constant change, with our behaviour damaging the air, land, plants, species and waters on our planet. 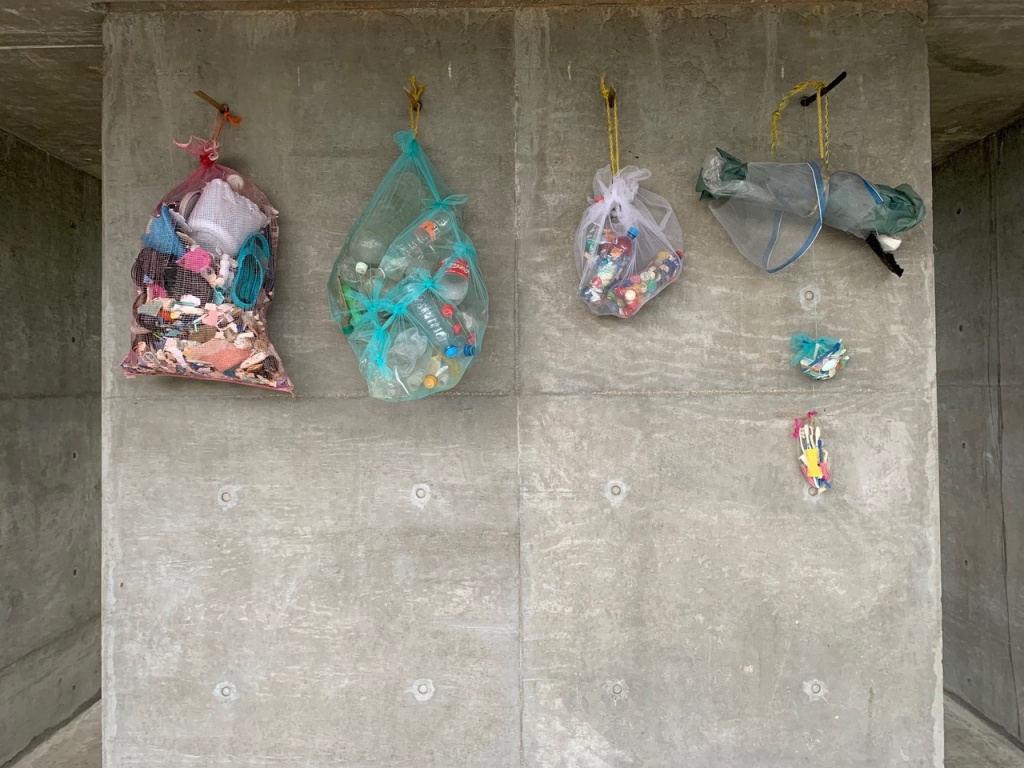 There seems to be a very strong sense of community at Casa Wabi. Could you expand on this? What was the interaction like between the artists?

The foundation wants artists in the residence to share ideas with its local communities and conduct workshops with them. It’s a very remote area, with a population that, more often than not, lives in poor socioeconomic conditions. Casa Wabi is convinced that personal encounters with art have a positive impact. By connecting the artists with its local communities, it seeks to generate dialogue and interaction between the communities and the artists, to enrich their outlook on life. Every artist in Casa Wabi is asked to do a series of workshops with a group of people from the local community.

There’s also a strong sense of community within the residence; eating three meals a day together and sharing open studio spaces made us, the 6 artists staying at the time, interact a lot. In a way, it was like a social experiment, like those you watch on TV! Put 6 artists from different corners of the world in a remote and paradisiacal surrounding, with an extreme climate in an architectural gem, and see what happens! We all got along very well, and I feel very lucky to have been with this group– I made friendships for life. We helped each other with the community projects, assisted each other in finishing or assembling our work, and even asked for each other’s feedback – this was very enriching and inspiring for me. 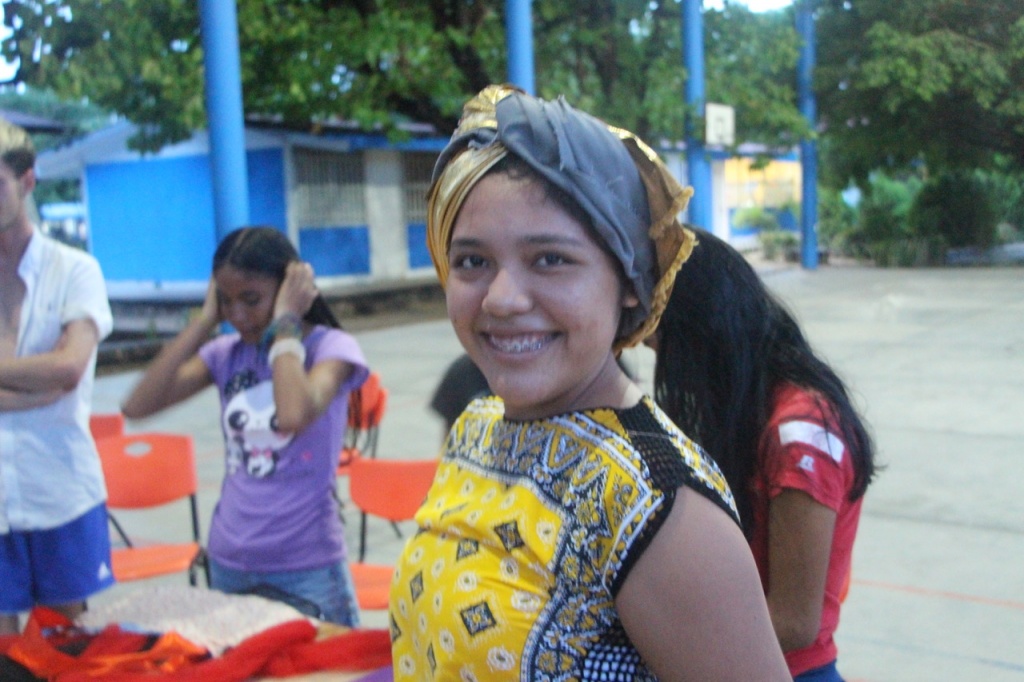 The principle of giving back seems to be deeply rooted in Casa Wabi’s philosophy. Could you tell us a bit about your project there and how you gave back to the local community?

I conducted my workshops together with Kristin Reger, an artist from the US that lives in Mexico City. We were connected to a dance group made up of girls aged 14-17 from Rio Grande. As women from other parts of the world, we were fully aware of our privileged position and, (even though we probably looked like two crazy ladies!) we wanted to connect with the girls that we were working with, acknowledge our position as women / girls in society and address topics such as self-expression.

During the 5 sessions of the workshop, we sought to use creative processes to foster the bonding between women.  The aim was to overcome boundaries and generate self-reflection. Working with cheap and accessible materials (such as second-hand clothes and local clay) to make the exercise easily replicable, and using clothes and personal objects to bring inner-being to the surface, the theme of the workshop was: Tú, ¿quién eres? Afuera y adentro. [Who are you? On the outside and from within.]

From the exercises emerged interesting conversations and a strong sense of emotional intelligence. The sessions were dynamic, corporeal and unorthodox. Through absurdity and wild action, we found creative answers. Banging clay on the floor, putting shirts on our heads, making ropes from old clothes, we thought about colours and shapes and used them to express our own feelings and opinions.

The question emerged: ¿Qué te hace única? [What makes you unique?]. We made talismans by adorning clay objects, using colours and fabrics with personal meaning. The workshop finished with an analysis of how each object reflected their uniqueness. I hope I gave back to these girls some of the liberties that I’ve found during my life and in my work. Sharing thoughts and feelings with women are so important in creating unique bonds and providing support to each other. I showed them that there is an abundant amount of discarded textiles and fashion waste in the world, and that there is no cost in self-expression. I showed them that abstract and unconventional ways of looking at things can create an enormous sense of liberation, breaking down boundaries and opening up a space for unique self-expression.