BristoLatino politics editor Cleo Robbie reports on the launch of a new UOB Brigstow Institute project that involves cross-continental digital storytelling about the human costs of the global drugs war in Mexico.

Should we legalise all drugs? (And by legalise, I mean legalise the production, transport and consumption of drugs). This was the question I was left with after attending the launch of the website ‘Digital Storytelling for Anyone’s Child’ at the Brigstow Institute back in October.

Digital Storytelling for Anyone’s Child is an initiative set up by an unusual but interesting mix of people: historian Matthew Brown, technologist Ewan Cass-Kavanagh and thinktank Transform Drug Policy Foundation. The aim is to “show a more human side of drug use” through listening to the voices of mothers, sisters, brothers, wives and husbands who have been affected by drug cartels in Mexico. Navigating the website, you come across various snippets of people’s lives that have been destroyed by the loss of a loved one. Many have gone missing and have likely been killed by the drug cartels themselves, others by corrupt policemen and members of the army. 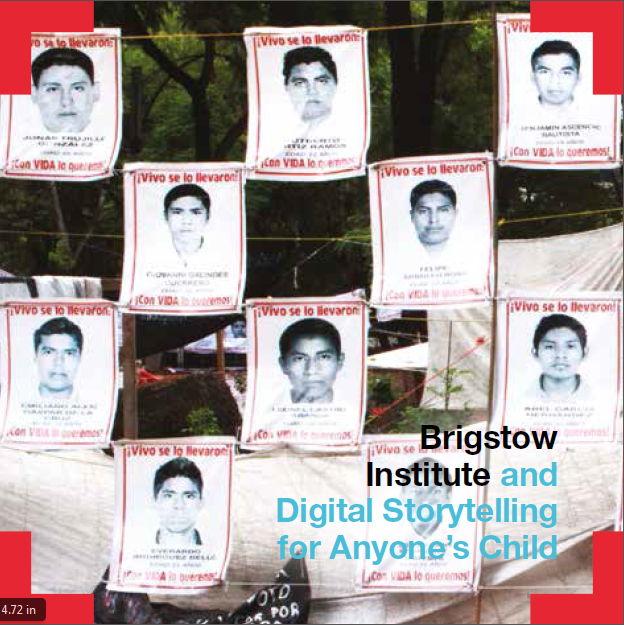 So what has Brigstow, an institute that brands itself as a promoter and researcher of ‘new ways of living well’, got to do with a storytelling website, I wondered. Well, as Jane Slater from Transform explained, there is a significant gap between the recreational use of drugs in the UK and the reality of drug production. Consumers isolate themselves from the production process. Try asking your friends if they know where their drugs have come from, it is unlikely that they do.

Digital Storytelling for Anyone’s Child aims to fill that gap and provoke thought on the human cost of drug taking. Jane Slater openly explained that her thinktank promotes the complete legalisation of all drugs and campaigns to change the UN Conventions on drugs.

“Complete legalisation is essential”, she explained.

Systems such as those in Holland or Portugal where consumption is legal, but the issue of the origin of drugs is not raised, are not solving any long-term problems. In fact, legalising consumption is actually only a way for the “West” to deal with its side of the problem, without actually solving any of the on-going worldwide problems with the illegal drug trade; such as violence, disappearing people and murder.

So, does listening to harrowing accounts of how the drug trade is ruining people’s lives in Mexico make us question the whole system of illegal drugs?  Yes it does, but personally, I must admit that looking through the Digital Storytelling for Anyone’s Child’s website left me concerned for the safety of the interviewees. These people are stating their names and the states in which they live, and are giving explicit details about the events their loved ones were involved in. In my view, this makes them extremely recognisable in a system renowned for trying to silence victims of such events.

On this point, Slater acknowledged that the people who testified for the website had already been vocal about their situations in other mediums and were speaking out willingly, and therefore had already taken the risk of voicing their stories. However, I cannot help but question where the responsibility would lie if the Digital Storytelling for Anyone’s Child’s website went viral, and wonder what kind of repercussions these families would incur if their identities were exposed by international media coverage, for instance. Have enough initiatives been taken to guarantee the safety of their family members?

However harsh this kind of comment may be, I will concede that my view on the issue of victims and activists’ safety is tinted, after spending ten months in Mexico on my year abroad working for a human rights organisation.

Nevertheless, I urge you to browse through the Digital Storytelling for Anyone’s Child’s website (live online from early next year) as it seriously makes us wonder what the benefits of the illegality of the drug trade are. Why is the drug trade illegal? Who or what benefits from its illegality? Because it does not deter anyone from buying and consuming drugs and it certainly does not benefit the Mexican people.