BristoLatino‘s Pete Keenlyside comments on ‘Diego Maradona’, a film which captures the extraordinary life of the Argentinean footballing icon.

The latest documentary by award-winning filmmaker Asif Kapadia tells the story of the Argentinian football icon, Diego Maradona. Combining voiceover interviews, a pulsating soundtrack, and candid footage of Maradona both on and off the pitch, Kapadia delivers an illuminating portrayal of the hysteria surrounding Diego during his time at Napoli, and the tragic personal toll that fame inflicted on El Pibe de Oro (the golden boy).

Completing a trilogy of documentaries about famous cultural figures, after Senna (2010) and Amy (2015), Diego Maradona dives deep into the mind of its central character, capturing his brilliance, arrogance and vulnerability. You don’t need to be a football fan to be captivated by this film. Beyond just a portrait of a uniquely talented individual, the film deals with wider cultural issues, and shows how people build their sense of identity around collective ideals, sometimes to the detriment of the human beings who embody those national and cultural myths. 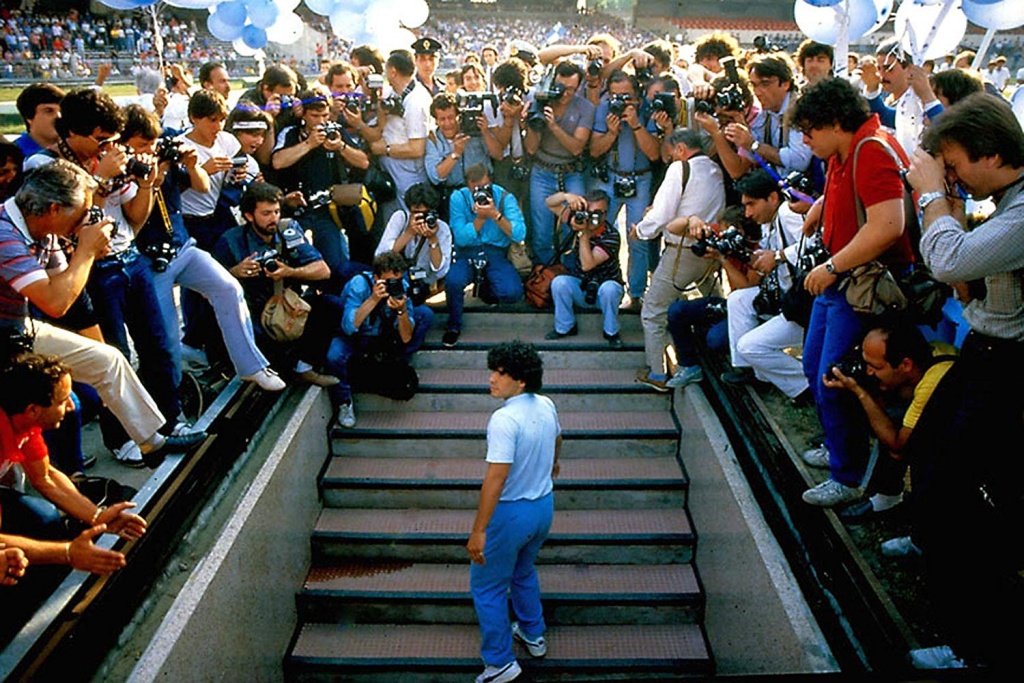 Maradona arrives at Napoli in 1984.

Few continents have as fanatical an obsession with football as Latin America. Its stadiums are known for being the loudest, its teams the most iconic, and its stars hold among the highest positions of reverence in society. Football also represents one of the few ways that people can escape conditions of extreme poverty. Pelé, Ronaldinho and Maradona are just a few of the many examples of those born into impoverished environments who managed to reach the pinnacle of their sport through talent and sheer force of will.

This ascendency has become somewhat romanticised, particularly in Argentina, where the potrero (the dusty fields on the outskirts of large cities) is regarded as a breeding ground for the country’s best footballers. The concept of el pibe (the boy) who learns to play in the criolla style, combining spontaneous brilliance and viveza (cunning, deceit) are all key components to the Maradona myth.

While Kapadia’s film does not reference these concepts specifically, it does show how important Maradona became as an expression of Argentinian identity and national pride. Never was this more evident than during the 1986 World Cup quarter-final against England. Arriving four years after the Falklands War, the game against the English was evidently about much more than football. Maradona sought revenge. 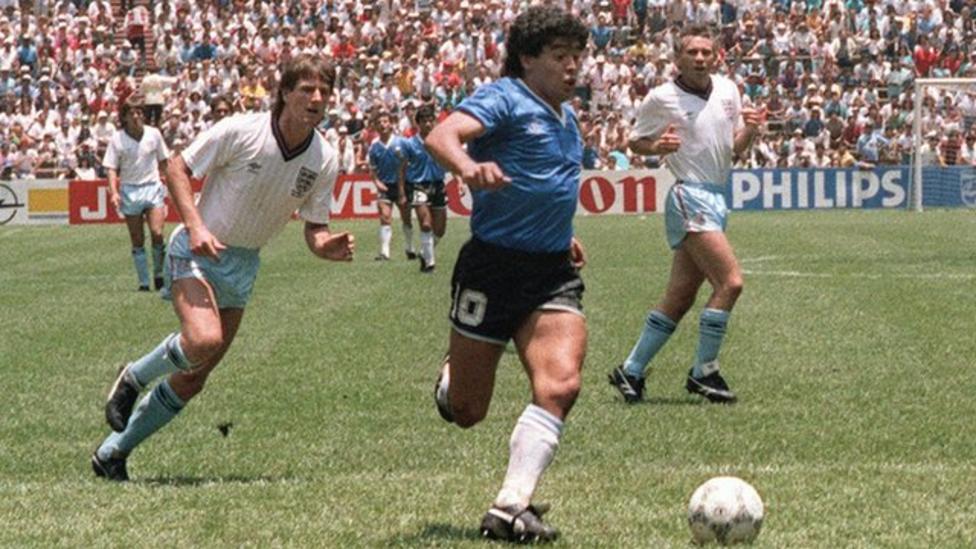 Maradona doubles Argentina’s lead with the ‘Goal of the Century’ against England at the 1986 World Cup.

In England, we are often shown the infamous ‘Hand of God’ goal in the context of cheating and injustice. What Kapadia shows are the events that preceded it, with violent tackles flying in from every angle as the English players tried to nullify Maradona’s presence. We see archival footage of the brutal conflict in the Falklands, and we learn how Maradona finds his inner fire from causes larger than himself. Piecing these elements together, the film seeks to question the simplistic narrative of Maradona as a cheat, and succeeds in finding the humanity underneath the mythic exterior.

Sadly, the fanatical hordes who constantly surrounded Maradona were not as concerned with seeing him as a person. To them, he was an idea, an extension of their identities, and they elevated him to godlike status, with one commentator noting how Neapolitans placed pictures of him alongside Jesus above their beds. In 1998, the Iglesia Maradoniana (Church of Maradona) was founded in Rosario, providing his most avid followers with a place to worship. 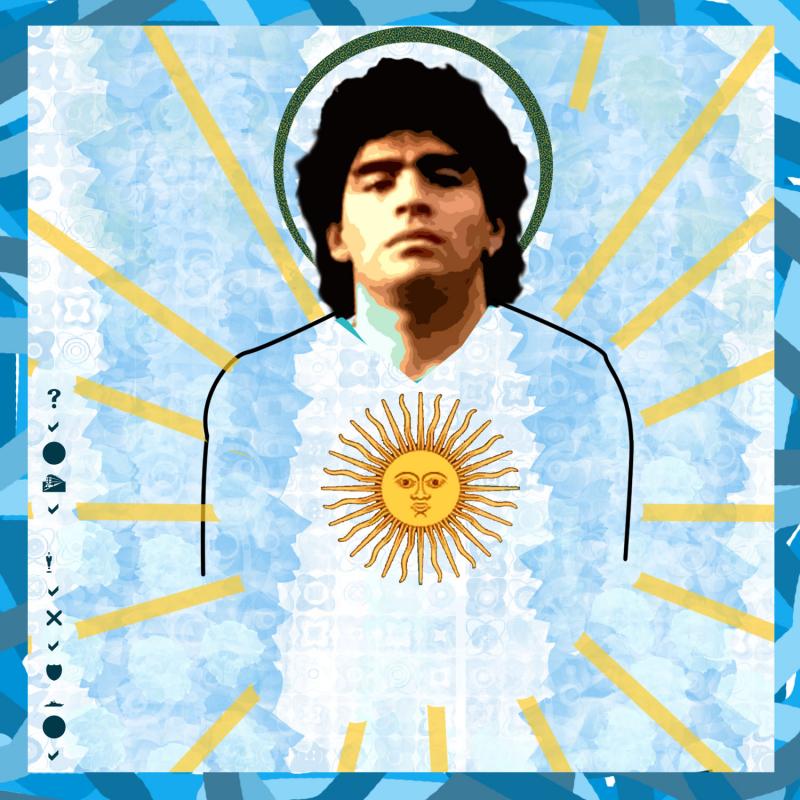 The Church of Maradona.

The fans are just as much a part of this story as Diego himself. Whether they are deliriously chanting his name on matchday, pressed up against the fence of the Napoli training ground, or surrounding him in an airport, their relentless presence in almost all the footage that Kapadia uses is enough to make the viewer feel claustrophobic, let alone Maradona himself.

Ultimately, as a symbol of Neapolitan civic pride, and Argentinian national identity, Maradona was stripped of his humanity. Diego from Villa Fiorito gradually faded away, and the film suggests that he turned to drugs and alcohol partly to escape this intense existence. It eventually destroyed him, he departed Naples in ignominy, and we are left to reflect on the human cost of national or cultural identity being pinned on one flawed character and his exploits on a football pitch.

This is not to say that the fandom of Maradona is misplaced. Kapadia’s film does an excellent job of showcasing his extraordinary talent, explaining why he was so revered, as well as celebrating the collective outpouring of joy that a sport like football can bring. But it certainly calls for a little more perspective, suggesting that in our enthusiasm to place our cultural icons on such lofty pedestals, we risk ruining the people that we claim to adore.