On the 23rd of October, at 01:30h, the greatest game of football earth has to offer takes place. Read on to find out a bit more about what happened the last time Boca Juniors played River Plate and what you can expect this time round.

Uruguay winning the first World Cup in 1938, the Maracanazo of 1950 (Brazil, by far the best team of the time, losing the World Cup Final, at Home to lowly minnows… Uruguay. Again…), “those 2 goals Maradona scored in the World Cup vs England in 1986” etc; I could keep going, but this is not a homage to the great moments of Latin American football. This is a homage to one fixture. One game.

Recently spotted doing the rounds on the British football twittersphere was a clip of supporters of Buenos Aires based team, River Plate, chanting their song “Si Señor”. The account handle, Football Scenes, only tells the beginning of the story (it would be cruel of me to not point out that Boca have their songs too…). This video, and all the jealous goosebumps it brought to peoples Twitter timelines, brought the Boca Juniors vs River Plate Derby (both Buenos Aires), the only self proclaimed súper game of football in the world back into the spotlight, just in time for this years wonderous rendition of the fixture.

Last year, the world was treated to the most outrageously, ineffably dramatic game of football that the world has seen in years as the two giants clashed for the first time in the clubs’ history in the Copa Libertadores final, the Latin American equivalent of the Champions League. It, quite literally, had it all. Bricks, tear gas, accusations of colonialism and corrruption, and profanities were all thrown around in abundance as the Argentinean capital reached and superceded boiling point, culminating in the match being moved from Buenos Aires where the match was scheduled to be played, to Madrid. After River Plate ultras attacked the Boca team bus, the fragilities and frustrations of the Latin game rose to the surface like muck. The relevant authorities were unable to diffuse the tensions, the passion amongst the fans skipped amber and went from fervour to fury faster than anyone could have expected and the footballing world was faced with the tangible dissapointment of having “the game of the century” cancelled. Ultimately, the match was moved to Madrid, despite pleas of injustice from the Boca camp. The final of a competition whose name  literally translates to the “The Liberators Cup” being played in the land of the coloniser brought about an outrage that went far deeper than the questions being asked about the administrative competence of CONMEBOL, the Latin American branch of FIFA. 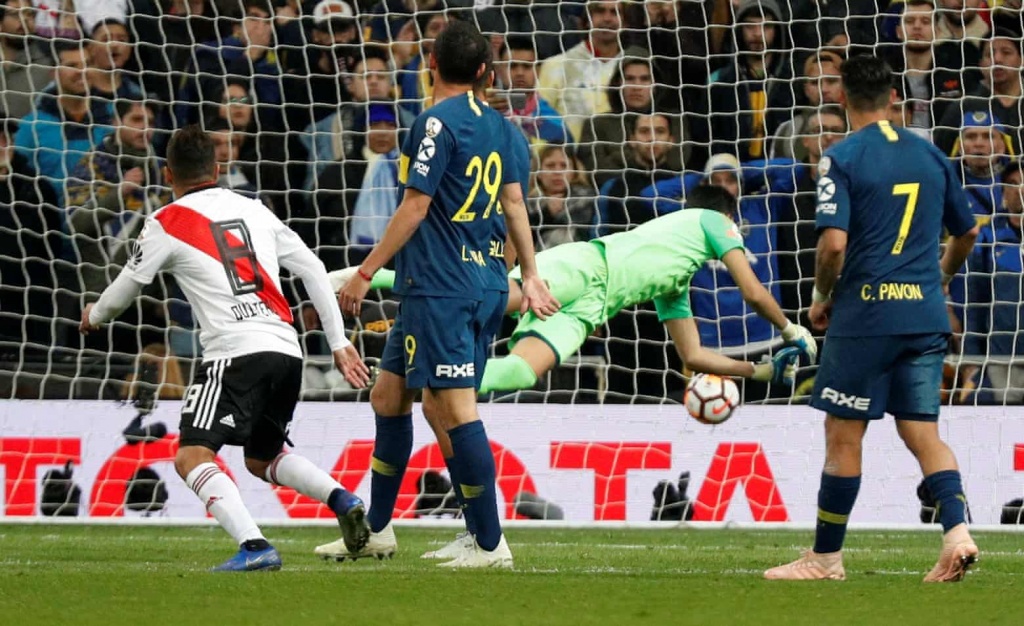 Ultimately, in a game fitting of the drama of the buildup, River Plate came out victorious over their bitter rivals in a timeless classic, winning the two legged tie 5-3 on aggregate, poetically sealed with a last 10 minutes of extra-time to conquer all others. A wondergoal from Colombian dynamic playmaker Juan Quintero in the 109’ to give River Plate the lead, Boca hitting the post in the 119’ in what would have been the equaliser and then… to ensure there was one more epic ‘gooooooooooooool’ in the final, a 121’ 5th for River.

So what can we expect for this years fixture? Well, I am sorry to tell you that we may not quite reach the wonders of last year. However, with the match delicately poised at 0-2 to River Plate, Boca Juniors will be desperate to get one over their arch rivals and reach the 2019 final of the competition, which will be played against the victors of Grêmio or Flamengo (Brazil). The second leg will be played on the 23/10/2019 at 01:30h. I for one will be watching.