Every week we will be sharing one of the pieces from our first ever print magazine which discusses all things Latin America! We hope you become inspired to read and learn more about this fascinating region of the world. Here is the fifth article from Bristolatino’s Bella Caro and Rupert Comer about the Brazilian telenovela, Coisa Mais Linda (Most Beautiful Thing).

Netflix’s latest Brazilian telenovela, Coisa Mais Linda (Most Beautiful Thing, 2019) is set in 1959 during the birth of bossa nova, a musical movement popularised by young musicians and university students, which fused samba and jazz. Bossa Nova blossomed in the early 1950s and mid 1960s, during a brief period of democracy sandwiched between two military dictatorships. Literally translating as ‘new wave,’ bossa nova symbolised the laid back, romantic aesthetic of the middle-class neighbourhoods of Rio de Janeiro.

Traditionally, telenovelas have often perpetuated harmful stereotypes surrounding race, gender and class. It is impossible to talk about Brazilian telenovelas without mentioning Avenida Brasil (Brazil Avenue, 2012), Brazil’s most popular series of all time, with more than 50 million viewers tuning in for the final episode. Although we won’t go into the incredibly complicated and intensely melodramatic plot here, Avenida Brazil’s essential premise was to translate the socio-cultural reality of the country, a claim which seems ironic when examining it’s cast list. Less than 10% of the characters are black, while over half of the Brazilian population identify as non-white, and within the white identifying population 30% have black ancestors. Not only is Avenida Brasil unrepresentative of the real racial demographics of Brazil, it also goes against the recommendations of a 1998 law calling for at least 25% of characters in television programmes to be Afro-Brazilian. Coisa Mais Linda actively attempts to challenge these preconceptions and bring the telenovela genre into the 21st century, while also drawing on its historical context to provide contemporary social commentary.

The series is centred around the friendships of four women, and despite the various difficulties they encounter, it is an uplifting depiction of strong female relationships. The central protagonist, Maria Luíza, is abandoned by her husband for another woman after moving from São Paulo to Rio de Janeiro and is left to fend for herself in a new city. María, nicknamed Malu, goes against the wishes of her highly conservative father and decides to open a club with live music. Malu breaks into the male-dominated nightlife scene, enlisting the help of her neighbour’s housemaid Adélia in the process. Thereza, on the other hand, is already working as an editor for a newspaper; surrounded by stuffy old men, she is confined to writing advice columns on the best outfits for a first date. Meanwhile, Malu’s childhood best friend Lígia is trapped in an abusive marriage with an up-and-coming politician, preventing her from pursuing a career as a singer. 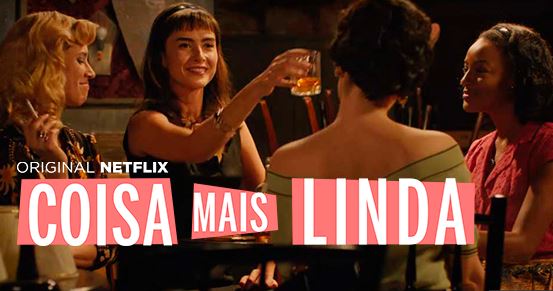 In Avenida Brasil, black actors are cast as barmaids, domestic workers, waiters, hairdressers and rubbish collectors, and are associated with poverty, illiteracy, crime and misery throughout the entire show. In Coisa Mais Linda, the main black character, Adélia, does not simply remain a housemaid. The show subverts typical ‘white saviour’ dynamics when Adélia becomes Malu’s equal business partner and is just as integral to the plot as any of the other three main characters. Although this may not appear to be particularly radical, it is in fact a stark change from telenovelas of the all too recent past. Coisa Mais Linda accurately depicts the prejudices of this time period—Malu is unable to get an alcohol license or a bank loan for her business because she is a woman, and Adélia’s racist employer refuses to allow her to use the elevators in her apartment building. However, while Coisa Mais Linda passes the 25% rule in terms of its protagonists, the issues it deals with, such as gender and class, are almost exclusively viewed from the perspective of its rich white characters. One notable exception is when the club is destroyed by a flood and Malu laments the fact that she has lost everything after having fought so hard for the right to work. Adélia, however, is quick to remind her that this right Malu had been striving for was something that was thrust upon her as a child. Growing up in a favela, Adélia had to work from the age of eight in order to survive. She tells Malu: “You could always choose. I couldn’t.” While we are made to sympathise with the rich white characters and the obstacles they are forced to overcome as women, we are consistently reminded that Adélia must also surmount the additional barriers of her race and class.

Telenovelas aren’t capable of promoting social change all on their own, but they can call attention to issues, spark debates, and give viewers an opportunity to reflect on societal inequalities. In our increasingly globalised and politically polarised world, media giants like Netflix are instrumental in informing the ways we perceive and react to social norms and carve out our identities. Even though Coisa Mais Linda depicts a time in which gender and class relations were dictated and controlled exclusively by white upper-class men, it equally envisions the possibility of solidarity and friendship among women as a means to surpass these difficulties. Rather than solely portraying a fatalistic depiction of the everyday battles of being a woman, the show focuses on the simple pleasures of female friendships, perfectly coupled with the simple pleasures of the bossa nova era.

The bossa nova era was a time of great optimism and modernisation in Brazil. It almost seems like an ironic choice to produce a series set in this era when Brazil’s current political climate is one of division, uncertainty and instability under Jair Bolsonaro’s highly conservative government. With the start of a new decade closing the series, the show teeters on the edge of the military dictatorship that began in 1964. Bolsonaro has openly praised the military regime, calling for a return to the traditional values that it espoused, including the marginalisation of women, people of colour, and the LGBTQI+ community. Unfortunately, even 60 years later, the struggles of the protagonists in Coisa Mais Linda still hold relevance today.

The second season of Coisa Mais Linda will be released on Netflix later this year. Watch the first series here.