Bristolatino’s Charlotte Crawford is currently on her year abroad in Chile and here she shares her thoughts on the current political crisis which has engulfed the South American nation. 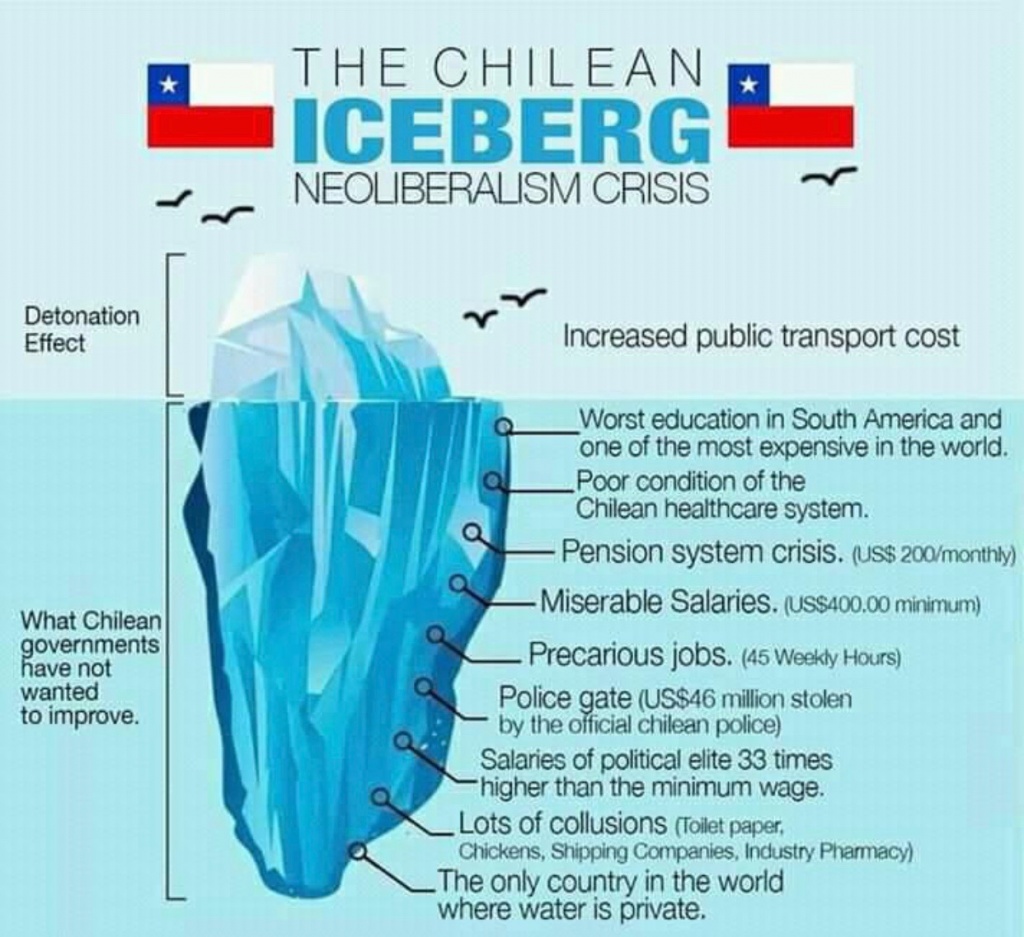 When looking into Chile for my year abroad, I, like many others who decide to come here, was comforted by its ‘good’ reputation. “The safest country in Latin America”, “the most developed”: Chile is thought of as a mini Europe or USA, a place where foreigners can enjoy the amazing travel experiences this continent offers, without the discomfort of feeling like they’re in the third world.

The story on the inside, however, is quite different. Chile has the highest inequality in the OECD, and in the whole of Latin America. According to CEPAL, the Economic Commission for Latin America and the Caribbean, 26.5 percent of the entire country’s wealth is accounted for by one percent of the population. The minimum wage here is pitiful – the equivalent of around £1.64 – and unlike most ‘first world’ countries, the median salary of the country barely exceeds it. Despite this, living costs are incredibly high, and in absolute terms, never mind in proportion to what people earn. For me personally, shopping for food, toiletries and other essentials constitutes a considerably bigger outgoing than it did while I was living in Bristol.

However, it’s the transport costs, and the seemingly negligible hike of 30 pesos (£0.03) in metro fares, which lit the touch paper that kicked off all the unrest. Here in Santiago, a much higher proportion of people’s incomes goes on transport than in other first world cities. Metro fares account for between fifteen and twenty percent of the income of someone on the minimum wage, and for the poorest twenty percent of the country, more than thirty percent of their income goes on the underground. 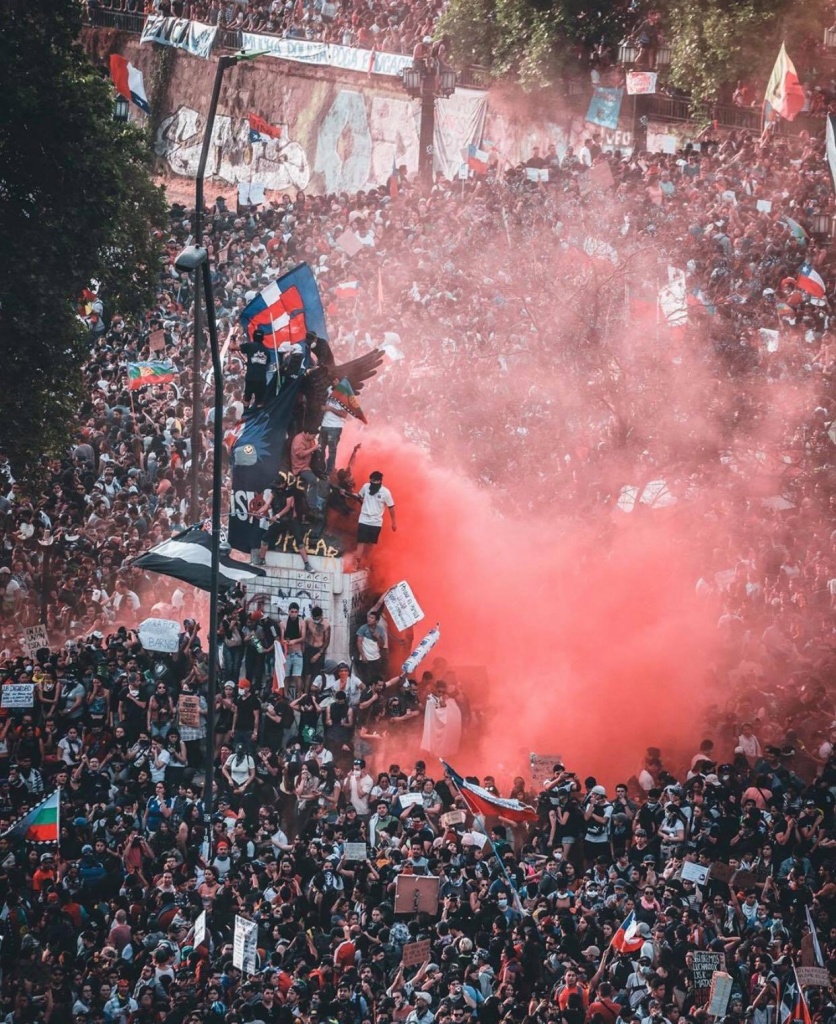 If you walk down the street or take a look on social media, you will see amongst many other slogans, the words: “no son treinta pesos, son treinta años” (it’s not thirty pesos, it’s thirty years). It is the notion represented by this mantra that the media has failed to grasp, and which is crucial to understanding the Chilean situation.

The since-suspended metro price-hike was the straw that broke the camel’s back. The thirty pesos constitutes the tip of the ‘Chilean iceberg’, a now-famous image illustrating the extensive privatisation and austerity imposed as part of the neoliberal regime brought in when the country returned to democracy. Poor public healthcare, low-quality education and water privatisation are just a few of the system’s features. On top of that, corruption and tax evasion are rife in political circles; cheating politicians on huge salaries, amongst them a multi-billionaire president, make a mockery of the people they govern and their constant struggle simply to exist.

Events began with fare-dodging in the metro, but things have now reached unprecedented levels, and there have been protests all around the country. Every day in Santiago people march through the streets and gather in large numbers in important locations around the city. The greatest march to date took place on Friday, 25th October and involved an incredible 1.2 million people. Metro stations have blazed, graffiti coats the walls of every building and piles of rubbish burn in the streets. A mix of shouting, car horns and cacerolazos constitutes a soundtrack to city life, as people bang on empty pots and pans outside and in their homes as an ongoing form of peaceful protest. 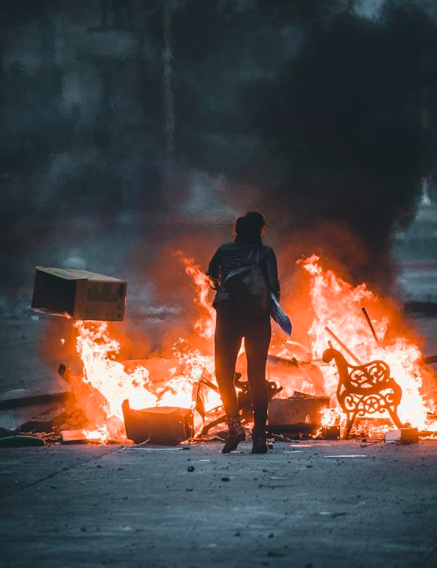 The actions of the carabineros (the police) and later the military have gone hand-in-hand with the protests right from the start, and have to a great extent determined their nature. Protests both peaceful and violent have been met with brutal violence from state forces, along with the consistently liberal use of tear gas and water cannons. The response of the police serves as a symbolic demonstration of a complete denial of citizens’ rights by the state. A 23-person death toll, a count of more than 1,300 injured, and frightening rumours of torture all present serious questions as to what democracy actually means here in Chile.

Meanwhile, the world’s media continues, for the most part, to spectacularly miss the point. Reports have focused heavily on arson and the looting of supermarkets, attributing such goings-on solely to an increase in transport fares. Protesters have been portrayed as little more than delinquents, errantly destroying cities and civil society for their fellow citizens and themselves. It has been said that the retraction of the fare increase and the military curfew ‘failed to quell unrest’, when the crucial fact is that those measures only gave the Chileans more reason to fight. What news outlets are consistently failing to discuss is how dire the situation needs to be for a population to be driven to bring its own country to its knees.

As things stand, it’s hard to know what the outcome of all of this will be. The idea of a return to normal civil life is attractive, but for the sake of the Chilean people it must only happen in the wake of the promise of serious reform, something Piñera seemingly cannot be relied upon to deliver. What is immensely inspiring about all of this though, is the conviction and solidarity displayed by so many of Chile’s people as they fight tirelessly for a quality of life and the protection of a government that I and the other internationals on the ground at this historical moment take for granted.

“No estamos en guerra,” they insist in response to the president’s inappropriate declaration that their country is at war.