On Thursday the 24th November 2016, Bristolatino editor Rebecca Wilson joined Colombians gathering in Bogotá’s main square Plaza Bolívar, to celebrate the signing of the new peace agreement between Santos’ government, the FARC, and the Colombian public. Large screens streamed live footage from Colon Theatre, situated just behind the square, and speakers amplified the national anthem, sung by Cecilia Silva Caraballo. Citizens waved white flags and held painted umbrellas, supporting the peace process. Most clearly present at the scene were news and communications correspondents, perhaps reflecting that this was more of a political show than a community celebration. 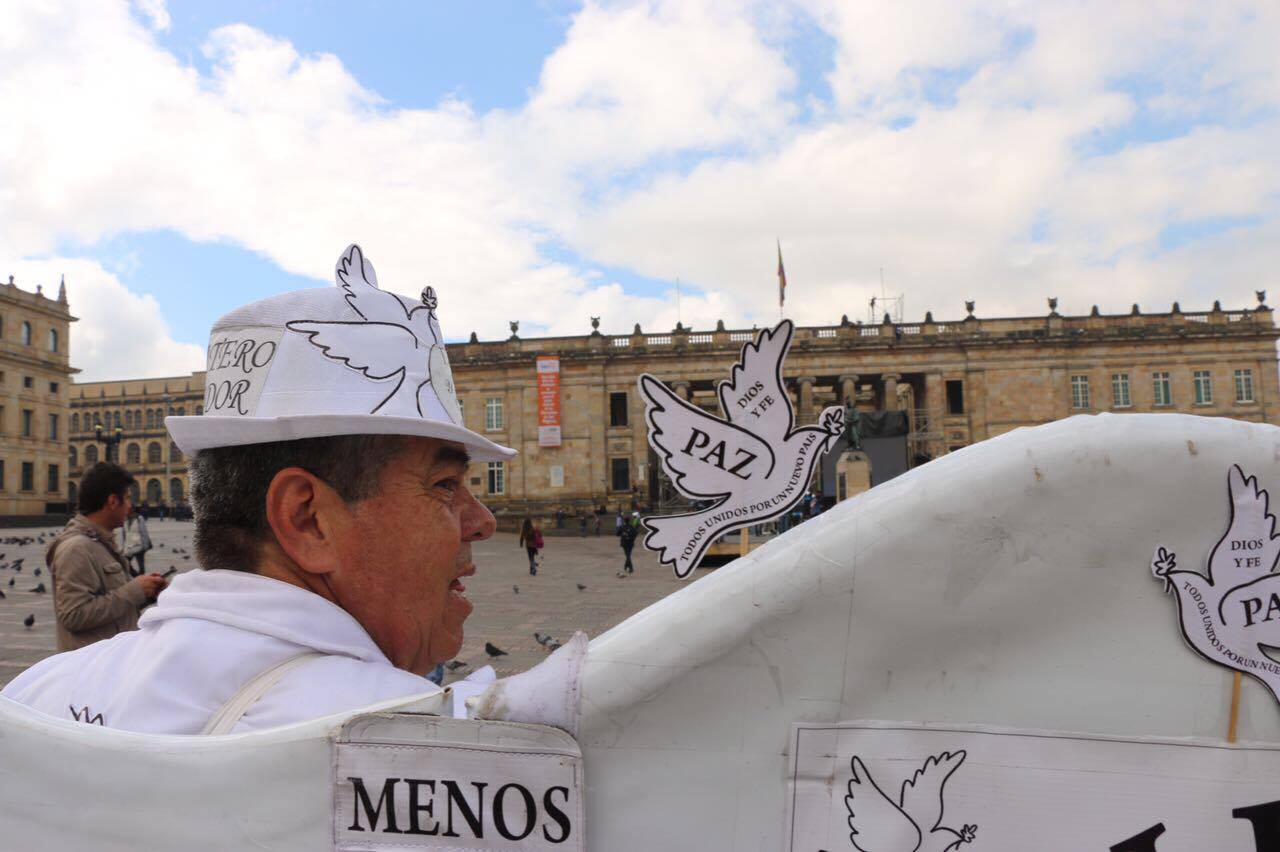 A member of the crowd celebrates in style

After the Colombian public rejected the original agreement with 50.2% voting no in the plebiscite on the 2nd October, the opposition suggested 57 points for revision. 54 of these have been amended for the new agreement. Changes feature inclusion of both victims and disarmed guerillas in its efforts to protect gender and sexual orientation, the accord is harsher on circumstances of the FARC’s political involvement and has removed foreign magistrates from the special peace tribunals. Critics, such as leader of the opposition and the Central Democratic Party and ex-president, Álvaro Uribe, held that they were still unsatisfied with the agreement. However president Santos stated that there is no more room for negotiation.

After the results of the referendum left nearly 7,000 FARC fighters who had been ready to begin their demobilization in legal and operational limbo, both Santos and the Colombian public were urging for an “acuerdo ya”(“agreement already”). Santos imposed a ceasefire following the plebiscite but stressed that this was extremely fragile. “The need for peace is urgent”, he stated in his speech the morning he signed the agreement. Some fighters and human rights activists were killed in the days following announcements of the new agreement, emphasizing the time limit to the ceasefire.

The modified peace accord was taken to Congress, where it received 90 votes in favour and 13 against. FARC leader Rodrigo Londoño (also known as ‘Timochenko’) and Colombian president Juan Manuel Santos signed the agreement after 11am, which was followed by cheers from the public waving their white flags. 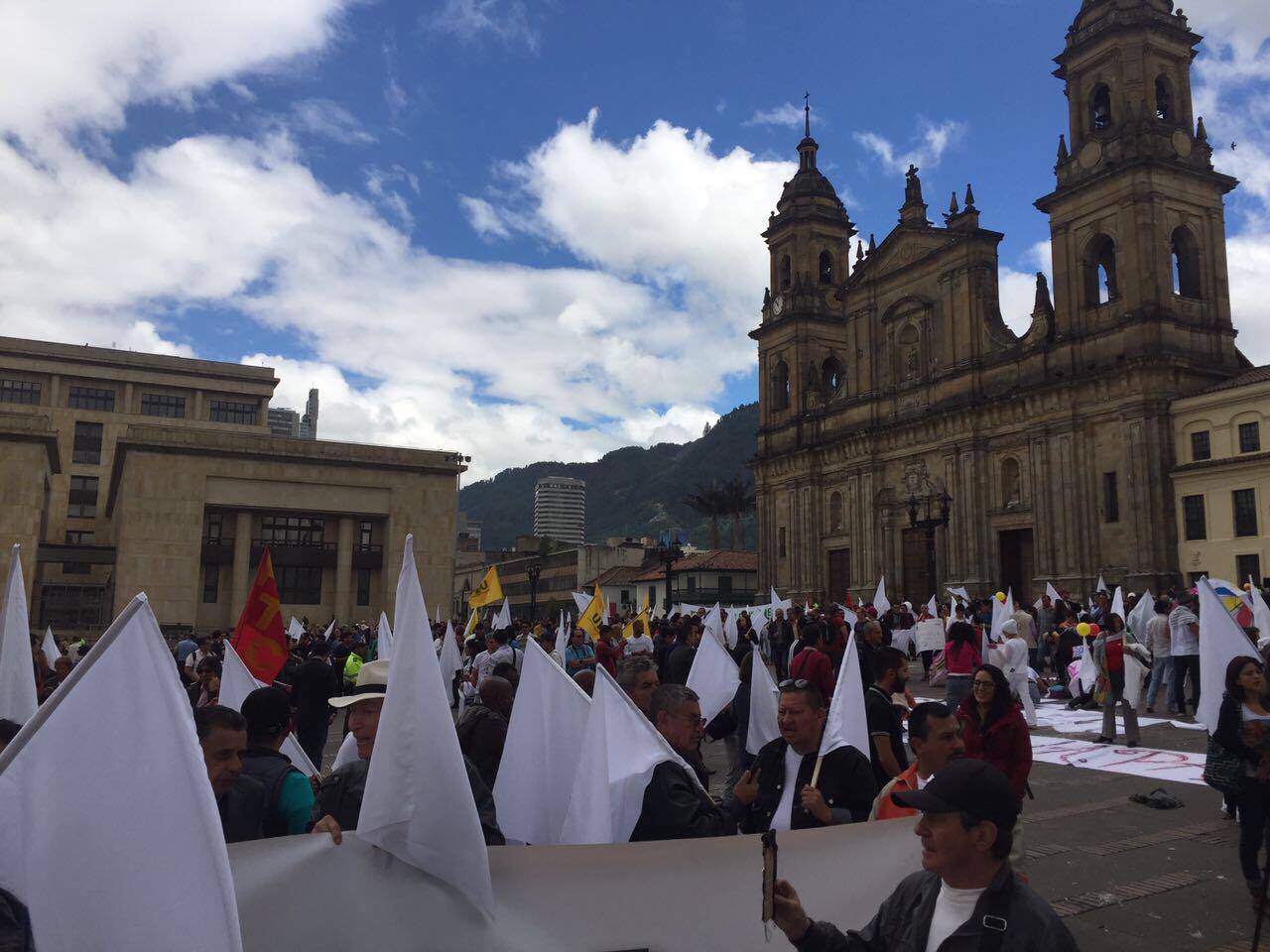 Citizens who had camped in the square, demanding peace, celebrated by singing “Oro, oro, oro; la paz es un tesoro”, (“Peace is golden, peace is to be treasured”), they played guitars, maracas and gaitas, and invited the public to sign a material banner bearing a statement of peace.

The city’s mayor, Enrique Peñalosa, evacuated the ‘Campamento por la paz’ (Peace camps) and evicted these same peaceful protesters after the agreement was amended last Saturday. The ESMAD (Riot Control policemen) entered the camp at 3am that Sunday morning. Some protesters left ‘voluntarily’ and others were violently forced out. When Peñalosa left the theatre this morning after the agreement had been signed, a crowd followed after him shouting “¡Fuera! ¡Fuera! ¡Fuera!” (“Out! Out! Out!”)

In the speeches which followed the signing, ‘Timochenko’ declared: “Let our words be our only weapons”. Santos called for Colombians to “turn the page” on this 52-year conflict which has left 220,000 dead and displaced millions. Supporters in the square celebrated chanting “¡Victoria!” (Victory!) and “Sí se pudo” (Yes, we could do it!), although it has to be said that the most populous in the square that morning were cameras.