As Brazil heads into the final stages of an election that has been characterised by violence, fake news and corruption, BristoLatino’s politics editor Alfred Davies gives you an overview of all the key details ahead of the 28 October second-round runoff between Jair Bolsonaro and Fernando Haddad.

The controversy that has engulfed this presidential race in Brazil has been a long time in the making. Constant corruption scandals have left public trust in Brazilian democracy at an astoundingly low level. The current president, Michel Temer, only holds his position due to the controversial impeachment in 2016 of his predecessor, Dilma Rousseff, for illegally manipulating government accounts, as revealed by the Operation Car Wash investigation.

Temer has also been accused of unscrupulousness, and is not running in this October’s election. The incumbent, who vacates the presidency with record-low approval ratings according to pollster Ibope, has survived two attempts at corruption charges. A recent Brazilian federal police report claimed evidence that the 78-year-old had pocketed $300,000 in bribes from construction giant Odebrecht, as part of the corruption case that has rocked the region. Former company boss Marcelo Odebrecht was jailed and is currently serving house arrest on corruption charges. The 49-year-old businessman claimed to have illegally donated to Rousseff and Temer’s campaign in 2014.

In the early stages of this year’s presidential race, former president Lula da Silva held a healthy lead. However, the former union leader, popularly known as ‘Lula’, was later barred from standing in the election due to being jailed for a guilty conviction of corruption charges.

Brazilians head to the polls against this crooked backdrop, their satisfaction with democracy in the country slumping to 13%, the lowest of all Latin American nations, according to an October 2017 study by Chilean-based polling group Latinobarómetro.

Violence and security have been central issues in this election campaign. There were over 63,000 homicides in Brazil in 2017.

Alongside the continual accusations of corruption and subsequent challenges to his position, Michel Temer’s presidency will be remembered for a military intervention introduced in the state of Rio de Janeiro in February 2018, following a climax of violent crime during this year’s carnival.

The decree marked the first time the army has taken control of the city’s police force since the end of Brazil’s two-decade-long dictatorship, a contentious issue given the support among sectors of the far-right of Brazilian politics for a return to military rule.

Tensions were heightened yet again in March following the assassination of politician and activist Marielle Franco, rapporteur of a special committee designated to monitor the federal intervention and an outspoken critic of police violence and military presence in the favelas. Franco, aged just 38 at her death, was a Rio de Janeiro city council member who concentrated her efforts in defence of women’s rights, particularly black women living in favelas.

The murder of Franco sparked outrage and protests across the country. Amnesty International Brazil’s executive director, Jurema Werneck, said in a statement that the lack of resolution in the case brought to light the “inefficiency, incompetence and a lack of will in the Brazilian criminal justice institutions”.

The security issues facing Brazil have become ever-more apparent during this presidential campaign, with attacks on activists, journalists and members of the LGBT+ community by supporters of presidential candidate Jair Bolsonaro, who himself was victim of an assassination attempt in September. The far-right politician was stabbed at a campaign rally in the state of Minas Gerais in September and spent time in intensive care.

This comes at a moment in which, according to research conducted by Grupo Gay da Bahia (GGB), fatal homophobic and transphobic violence is at an all-time high in Brazil. GGB, the oldest gay rights association in the country, estimates that there were at least 387 killings in 2017.

In one particularly chilling recent case, a 19-year-old woman was attacked in the southern state of Porto Alegre by a group of men who drew a swastika onto her stomach with a penknife. According to GloboNews, the unnamed young woman was carrying an LGBT+ flag and wearing an ‘Ele Não’ anti-Bolsonaro T-shirt. 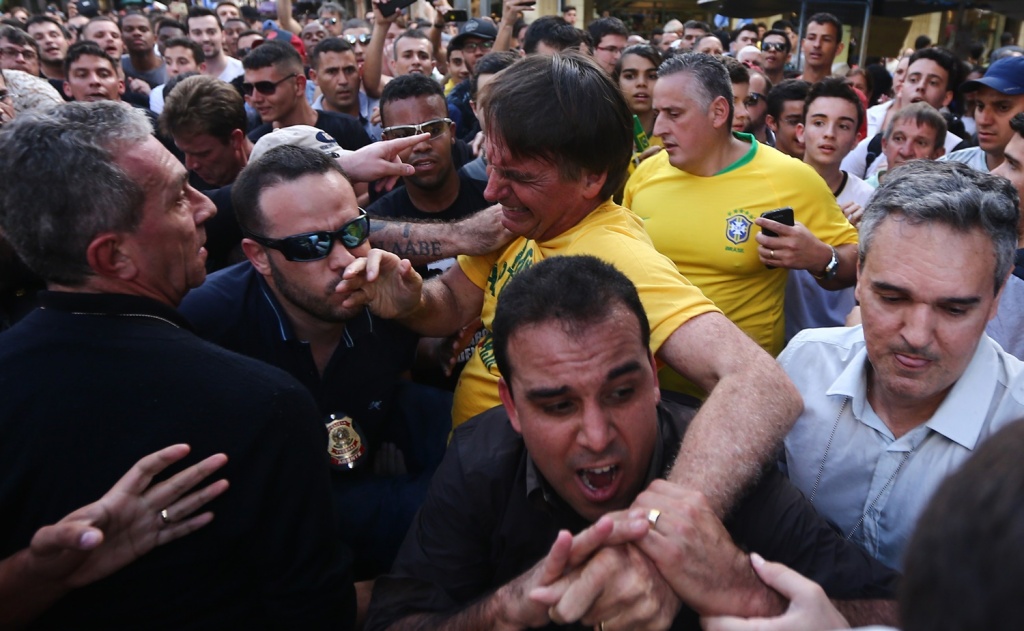 Jair Bolsonaro after being stabbed whilst campaigning

WHO ARE THE TWO REMAINING CANDIDATES?

The highly controversial 63-year-old former army captain won the first-round of the election with 46%, falling just short of the 50% of votes needed to win outright.

Bolsonaro is famous for his homophobic and misogynistic rhetoric, as well as numerous highly-provocative statements on a range of subjects including torture, the death penalty and environmental issues. The leading candidate has also repeatedly called for a return to a similar kind of military rule that Brazilians lived under for two decades until 1985.

“I wouldn’t rape you because you don’t deserve it”, said Bolsonaro of Workers’ Party Congresswoman Maria do Rosario. The politician was fined for that comment, as well as for his statement on a TV programme in 2011: “It never crossed my mind that I would have gay children, because they had a good education”.

The “Trump of the tropics” entered politics in 1988 when he was elected city councillor in Rio de Janeiro, and has since spent 27 years as a congressman. Portraying himself as a defender of family, religious and national values, Bolsonaro has adopted popular campaign tactics seen in the United States and across the rest of Latin America.

Earlier this year, the frontrunner posted a video on YouTube warning that his Workers’ Party (PT) opponent, Fernando Haddad, will convert Brazil into “the next Venezuela”. The effects of the Venezuelan crisis has permeated politics across the region. Opponents of the defeated Colombian leftist candidate Gustavo Petro also took advantage of this fear during the country’s recent presidential election. 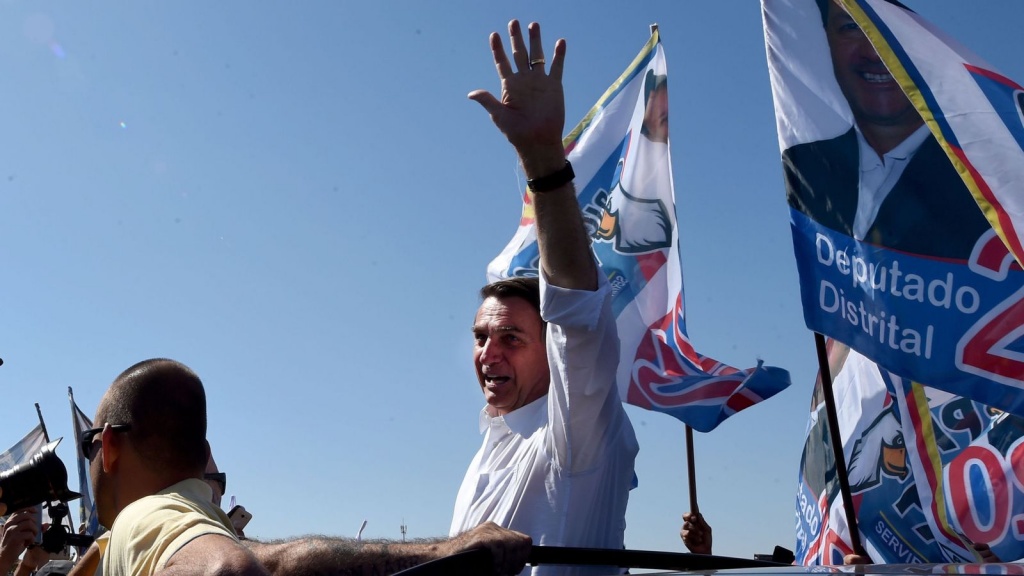 The stabbing of Bolsonaro in September drew attention to the very security and violence issues that hang over Brazil and have been central to the candidate’s campaign. Many of his supporters believe that his tough stance on such issues, as well as his proposal to loosen gun ownership laws, will make the country safer.


Fernando Haddad, winner of 29% of the vote in the first-round, has been faced with the daunting task of replacing the original candidate of the Workers’ Party, Lula. The 55-year-old, who comes from a family of Lebanese immigrants, was only confirmed as the party’s replacement candidate on the 11th of September.

The former mayor of São Paulo, an expert in Marxist history, is campaigning on an anti-austerity platform, with increased taxes for the rich, an overturning of privatization measures and an increase in protection of the LGBT+ community.

An advantage for Haddad will be Lula’s popularity amongst many sectors of Brazilian society for lifting millions of Brazilians out of poverty, however this has been somewhat tainted by the corruption scandals that followed. Haddad is also currently facing corruption charges relating to his mayoral campaign in São Paulo in 2012. 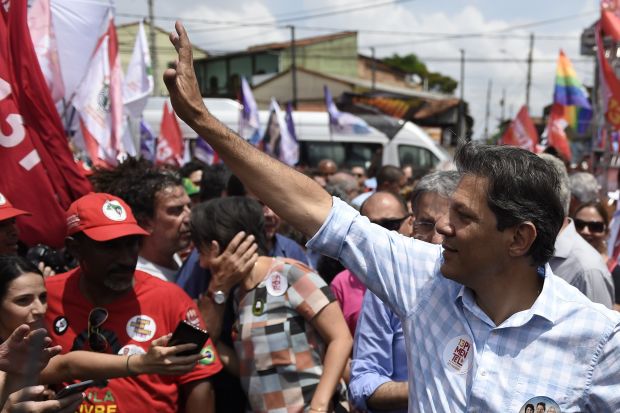 Haddad has much work to do in imitating the fame and popularity of his jailed ally. Many Brazilians admit to having never heard of Haddad, a far cry from the fame of Lula that led Barack Obama to name him “the most popular politician on Earth”.

The candidate of the PT has sought to appeal to the most fervent and committed Lula supporters, whilst also projecting a more moderate image that could draw in support from other sectors of Brazil’s polarised electorate.

According to the latest CUT/Vox Populi poll, Jair Bolsonaro is headed for victory, despite the latest Whatsapp fake news scandal and the violence associated with his supporters. The difference between the two candidates has fallen to around 6% however, with the poll putting Bolsonaro on 53% and Haddad on 47%.