Bristolatino writers Rebecca Wilson and Hermione Greenhalgh, who currently live in Bogota, visit a secret gem in the historic centre telling the story of Bogotá’s earliest settlers and their favourite alcoholic drink.

Just off the famous Chorro de Quevedo in La Candelaria, Bogotá’s historic centre of alpaca jumpers, guitars and gaitas, lies a seemingly typical bar. Surrounded by photos of 1950s Bogotá and the city’s hero, Jorge Eliécer Gaitán, you might think the wooden table and chairs are the perfect spot to sip a tinto. Past the unsuspecting fridge lined with beers, rice pudding and guaro lies a swinging wooden door holding the secrets of Alfredo Ortiz and his small but impressive chicha museum. 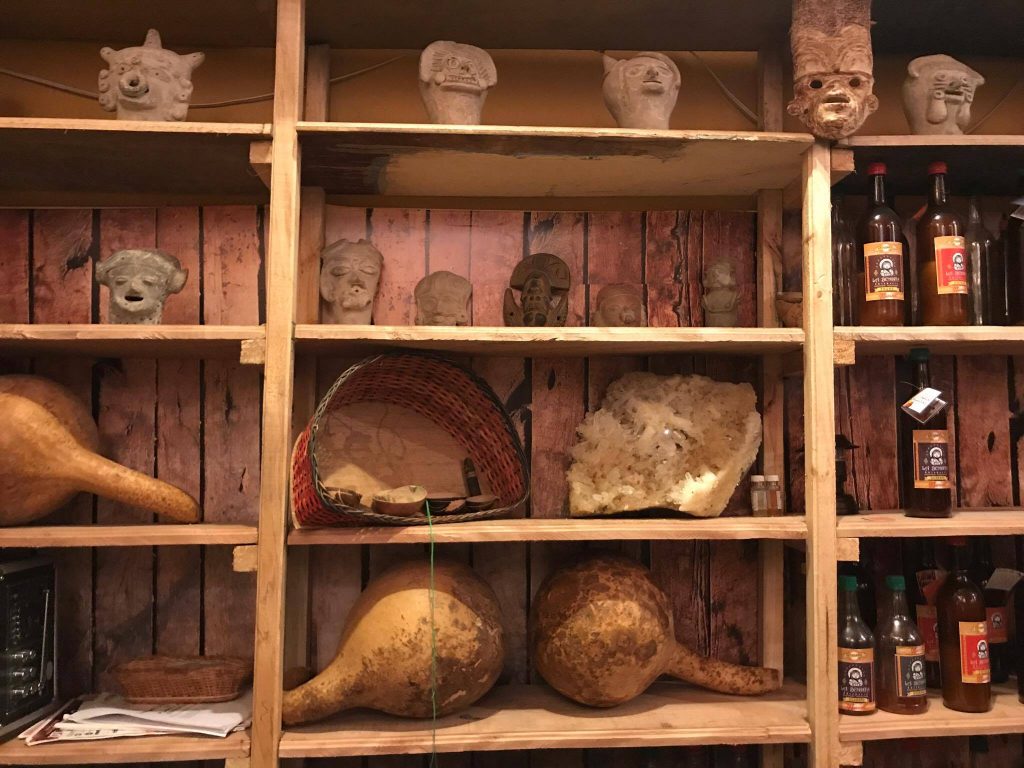 Alfredo your heavy-eyed, boozy guide staggers you around the four corners of his white stone-floored museum, inspiring you with photographs, diagrams, dried maize in all colours, totumas, traditional hats, stones used to mill grain and his own collection of special offerings.  Chicha was the sacred drink of the Chibcha people in Peru, Nicaragua, Costa Rica and locally of the Musica peoples in Bogotá’s surrounding areas of Cundinamarca and Boyacá, even stretching as far as the Chicamocha Canyon in Santander. Drinking the fermented maize drink would bring the consumer closer to nature and to spirituality. The alcohol was drunk ceremonially out of totumas, dried fruits ranging in size and used mainly as receptacle. In Bogota, 50 million litres of the stuff would be consumed per year. Alfredo’s museum exists to recuperate the origin, identity and memory of the four benditas; the sacred drinks we later tasted.

Alfredo dresses like a tropical 4-20-friendly park ranger, with a typical cachaco (quintessentially bogotano) sombrero, matching khaki shirt and trousers, a large hand-beaded tiger neckpiece sat under a shark tooth pendant, which was decorated with an emerald, a stone treasured by the Muiscas. A rather weighty lion-shaped gold ring sits on his finger and he carries a traditional woven Wayuu bag from la Guajira. Did someone say magical realism? 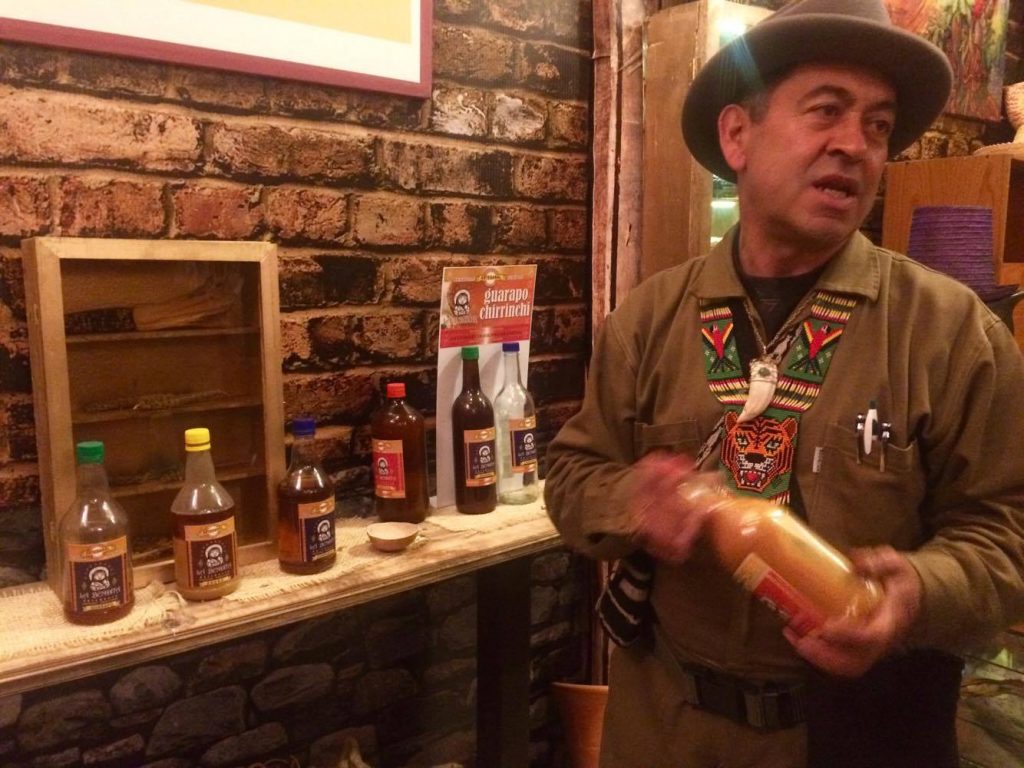 He teaches the common Stella-guzzling punter to savour the fermented fruity and nutty flavours of his home brews. First, he mixes the liquid carefully but with force (the yellowy sediment tends to fall to the bottom) he spins the bottle always to the right, mimicking its stirring process in the barrel and watching not to let the fizz pop the bottle. He then pours the chicha into a totuma at some height. Alfredo demonstrates the left-to-right sniff with eyes closed, before sipping a generous amount of the sacred liquid and swirling it under his tongue, releasing the flavours and tantalising his pallette. He then brings the chicha back up into the frontal part of his mouth, swishing it around his cheeks, with lips puckered, before finally finishing with a satisfying smack of the lips as you feel the drink reach your belly. It is important not to open your mouth during the tasting process, to really taste the complexities of the fermented plant and let the alcohol seep into your cheeks. You will feel the alcohol settle, warm, in the stomach, rather than in the throat or chest. We tried all four “benditas” in this way: a chicha, a guarapo (made from cane sugar and usually drunk on the Colombian coast), a zhuke (made from a blend of quinoa, maize and amaranth) and a chirrinchi (a distilled cane sugar alcohol), and admittedly felt a little merry afterwards.

Using the word ‘chicha’ to name the drink is a Spanish trend. ‘Chicha’ meant cleansing of the colon, or the runs for us Brits. The drink is powerful and was originally fermented by “young virgins who had not yet bled”, who would chew the grain, forming it into balls which they then wrapped in maize leaves (calzones or “panties”) for further fermentation. It could have strong colonic effects, especially on those not used to imbibing . So if we now imagine the conquistadores’ reaction to such a drink, and the Muiscas taunting reaction to those very Europeans’ bowel movements, you can see why the Spanish thought it was called ‘chicha’. Many other fermented drinks and even ceremonies and parties in the Andes were commonly denominated (or demonised perhaps) as ‘Chicha ceremonies’ by the colonialists. The Muiscas (which we should really spell ‘Muysca’ to avoid mispronouncing the word as ‘mosca’, which means fly), in fact called their sacred maize drink ‘fapqua’ (facua). 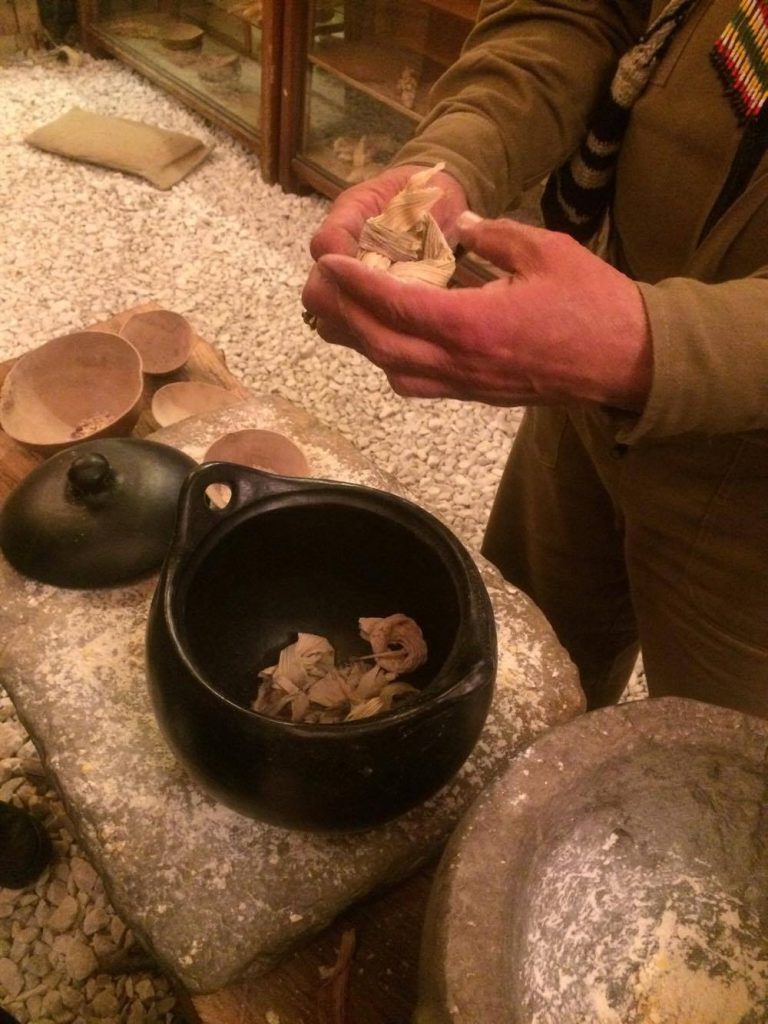 Alfredo describes himself as self-sufficient and fully independent. He is well-versed in the history of oppression and colonization of his Muisca ancestors and their practices, which he lives to keep alive. He runs many businesses, including restaurants, tours and selling his natural products. Like his ancestors, he consumes very little meat, and almost all liquid food (which explained the bloodshot eyes and stumbling) and lists the ‘new evils’ of today as flour, wheat, white sugar and salt. Alfonso also holds traditional plant ceremonies. We were repeatedly asked if we have ever taken yage, the Colombian word for ayahuasca, which he regularly enjoys.

With the arrival of breweries and the European cerveza, campaigns began in order to promote the consumption of the hoppy European bev instead of the ever-popular chicha, using the name and image of one of Colombia’s national freedom fighters, Policarpa (one of Bolívar’s girl mates) which is why beer in Bogotá gets its nickname “la pola”.

There was also a wave of negative campaigning. Propaganda from the 1930s on the walls of the chicha museum reads “Chicha stupefies” …. “Chicha incites crime”… “Prisons are full of chicha-drinking brown folk”. They even attributed the extreme, mad violence of the 1948 Bogotazo to the ingestion of chicha, and it was banned that same year. Subsequently, drinking chicha became a clandestine activity despite its spiritual significance for indigenous communities.

Fortunately, the chicha tradition is alive today thanks to tourist interest, societal appreciation and events such as the Festival de la Chicha, la Vida y la Dicha (The Chicha, Life and Happiness Festival) in the Bogota neighbourhood La Perseverancia where the Council declared the ancestral drink as part of Bogota’s cultural heritage in 2004.

The best place to find out about chicha is by walking up to the Chorro de Quevedo, where straws poking out of brown paper bags point to the many chicha sellers along the cobbled streets. It is now legal to make and sell your own chicha. Although drinking it in the Chorro, as is tradition, can lead to community service and fines. 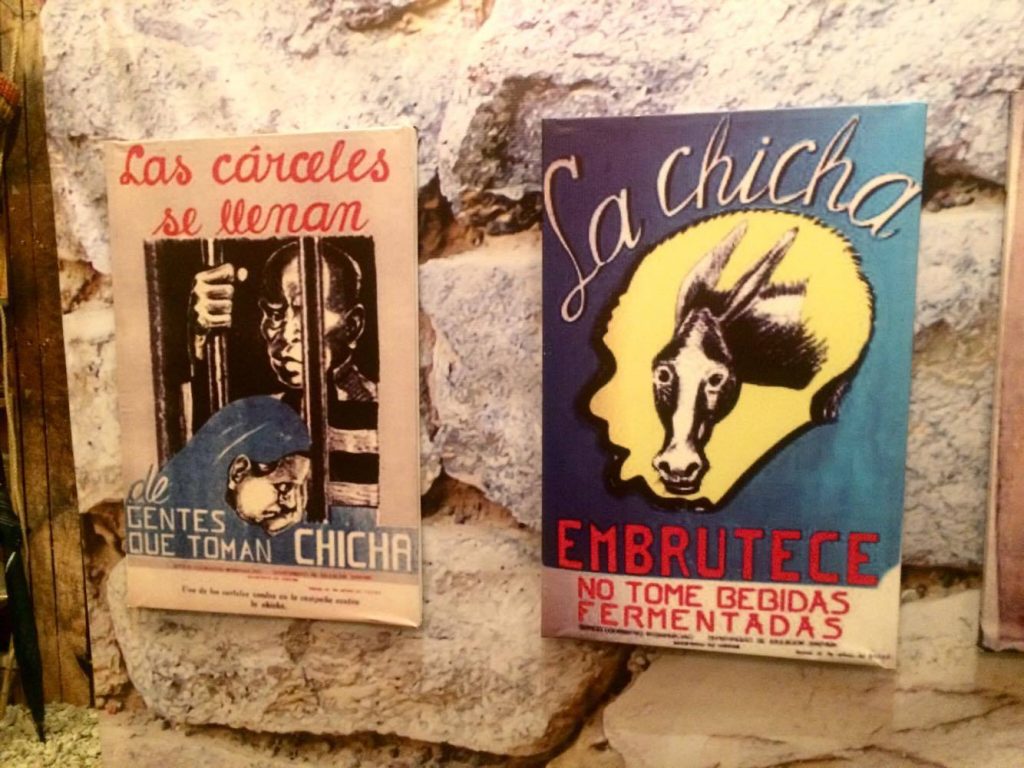 Anti-chicha propaganda from the 1930s