Art Focus: Life is an illusion

Bristolatino editor, Rebecca Wilson, meets up with artist, Daniel Liév, in his Bogotá workshop to discuss illustration and illusion.

“Art isn’t easy. Illustration is harder, with creators asked by their commercial clients to interpret, conceive, make, convey, enlighten, provoke and, in some cases, transform the viewers… all under tight deadlines with reduced budgets”, explain AI-AP (American Illustration and American Photography), who happened to select Liév as their 2015 winner for Best Latin American Illustrator.

Daniel’s work in both graphic design (which he studied and worked in for a decade) and illustration (a passion which he now pursues, freelance) demonstrate this exact ability to convey meaning and feeling through visual and escribed symbols. Daniel’s ideas are poetic from conception; scenes and phrases dance through his mind intertwined, before he reconstructs these ideas onto the page. He then plays with notions, symbols, textures and colours in Photoshop, perfecting his vision. His work has been featured in poetry magazines, publications on post-conflict peace in Colombia, illustration collections, and spans from logo design to concept art for films. He has been included as one of the 200 Best Illustrators Worldwide, in the in the 2016/17 Lürzer’s Archive.

Daniel states that his illustration is rooted in love, loneliness and sadness, but it is his way of embracing the fear. The two volumes of his illustrative works are titled, ‘La vida es ilusión’, after a period of his life in which all seemed to be an illusion. ‘Ilusión’ could refer to a sense of being cheated, the idea that the world is a practical joke, a falsity planted in the brain, a fear we are all confronted with if we think too philosophically. It could also refer to our perception of the world, without necessarily inferring deception. In Spanish, ‘ilusión’ also signifies hope, enthusiasm, happiness or light. These oppositional emotional meanings seep through almost all of Liév’s illustrations. “I’m an optimist, I think,” he told me, and I believe him; but I also respect his ability to shine meaning onto the bewildering lack of answers in life.

Daniel showed me ‘Wheelchair’, an image which was inspired by a joyous playful moment from the blockbuster French film ‘Les Intouchables’. The image could signify “the fun that can be had with a wheelchair”, whilst the shadows and positioning take on an element of time, suggesting bygone enjoyment. I imagined [perhaps inspired by Little Britain] the owner abandoning the chair to play in the theme park, whether mentally or literally. Although the image is bare in colour, there is a sense of fun and hopefulness. And illusion. 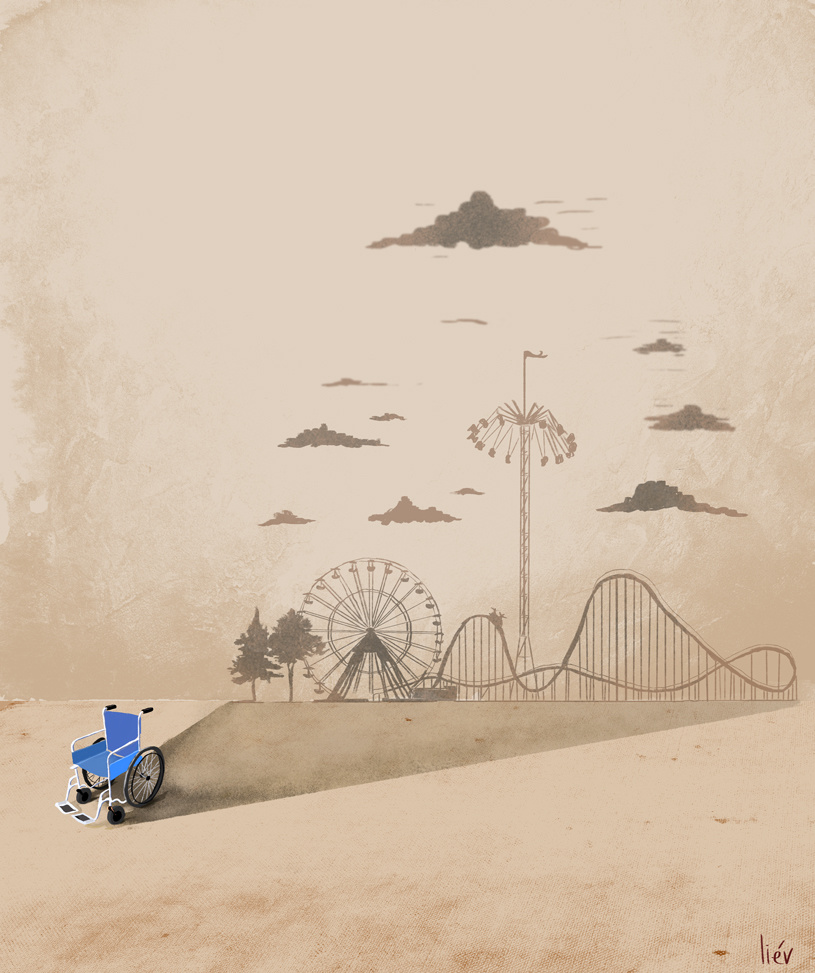 Daniel explained that it’s the message expressed through illustration which discerns it from other art forms. His use of symbol hints us to meaning, occasionally stark and clear, but always open to interpretation, something I quickly learned he is very open to, never sure of, and loves to explore. His images are not explicit, and to me appear simple and gentle in form and effect. There is a refreshing, hopeful breeze blowing across many of his illustrations. He laughed when I mentioned this, “There is, isn’t there?”

His images often feature large swathes of water, or vast night skies offering twinkling constellations or verdant auroras. “I like to present man as a tiny being amongst the vastness of nature. Night skies are great for that.” Daniel grew up on the rural family finca in Sopó, an hour and half outside of the smoggy metropolis of Bogotá, where I imagine a soft wind blows. 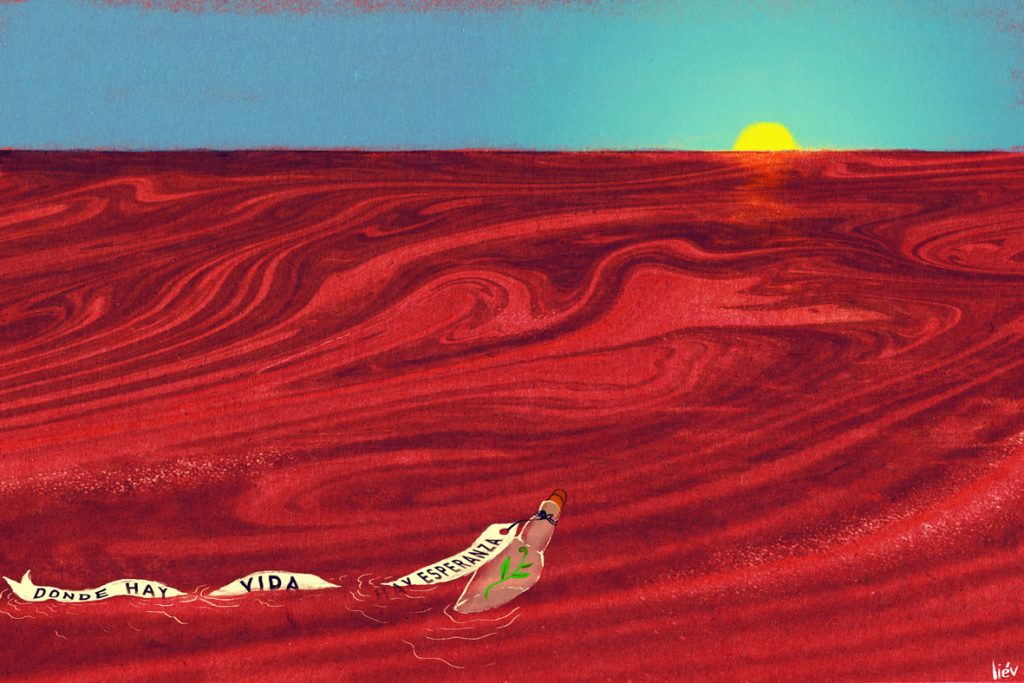 Daniel worked with VICE magazine on ‘¡Pacifícsta!’, a publication focusing on the post-conflict period Colombia is now facing. His illustrations accompany texts covering sexual violence, land mines and impunity, as well as an A-Z of the terms surrounding the violence and peace building. In conversation with VICE after winning an award for one of the illustrations, he stated the importance of his art form in the peace process: “Illustration allows you to point to reality without having to be so direct”. Consequently, Harvard University invited him to talk about the power of illustration talk at their Peace Conference.

In Daniel’s Bogotá studio, amongst prints, cards, books and easel and Mac, he showed me some of the playlists he listens to whilst working, explaining that “soundtracks tell a story,” and serve as a form of inspiration. We listened to Yann Tiersen’s ‘La Noyée’, and he talked me through visions of wind on a sandy beach transporting an old man through his memories. He has an undying love for Oasis and whilst working listens to the epic Icelandic band, Sigur Rós; Explosions in the Sky (whom he describes as “pure love”); and Colombian legend, Celia Cruz. “I sometimes listen to reggaeton whilst working, too”, he told me. I’m not quite sure if he was joking.

Daniel enjoys being sentimental in his work. Illustrations have addressed love and lost love, past relationships, the death of a friend’s brother who fell whilst climbing. “I like to bring it back to the cursi [the sentimentally cheesy], the kind of love you feel before your heart got broken. A feeling you return to when you fall in love again. Where there’s no boundaries, no shame.” 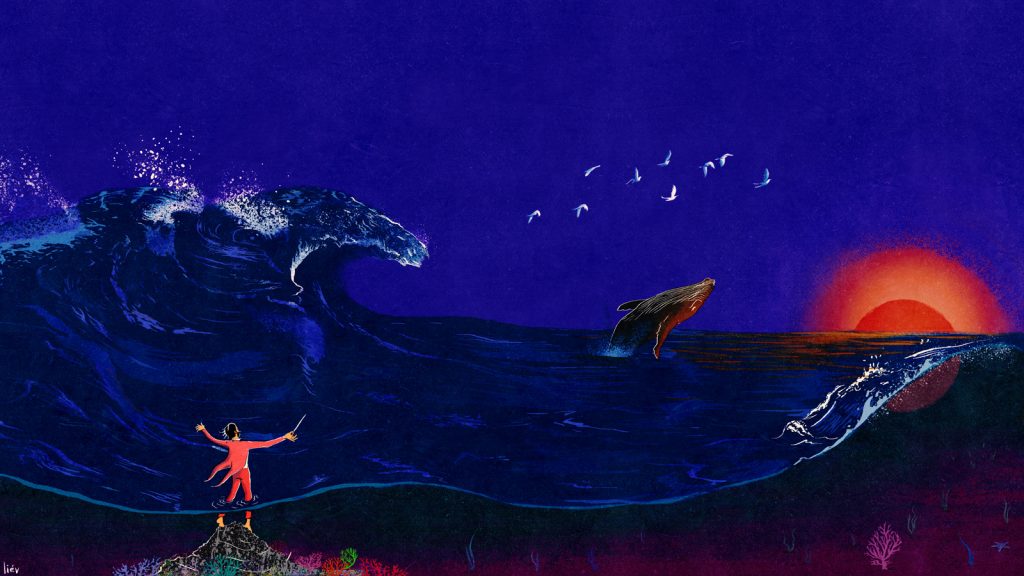 Album art for Waking Whale, an image he conceived at school, but only put together after receiving their commission. 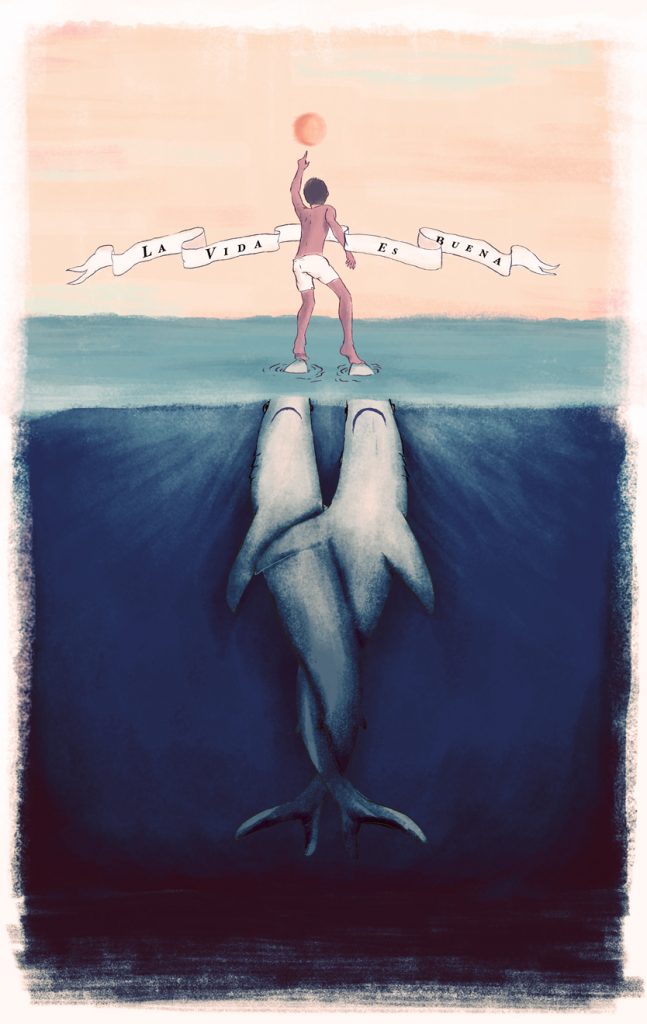 Liév takes commission and can be contacted on liev@lifeisanillusion.com. I highly recommend following his Instagram @danieliev

An illustration from Daniel’s work for ¡Pacifista!

Work from Daniel’s new book, a story told through delicate illustrations and poetry.